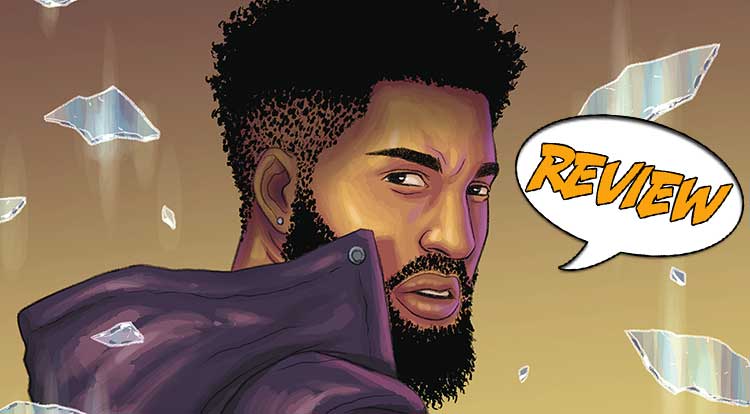 Lucas has been captured, and Mer is going to have to go to undesirable lengths to get him back.  Hopefully she’s not too late.  Your Major Spoilers review of 20XX #4 from Image Comics awaits! Previously in 20XX: Mer’s budding romance with Nuon gives her hope for the future, while her cousin Lucas confronts his past. Reality sets in as Nuon struggles to keep her identity a secret

20XX #4 opens with Nuon and Mer waking up after spending the night together. Unfortunately their morning is interrupted by a police drone arriving to issue them a fine for sleeping in a public space.  Nuon disables the robot and steals it’s chip to sell.  As Nuon and Mer speed away, Mer receives a message that startles her.  Elsewhere, Lucas is being tortured for information he claims he doesn’t have.  It turns out that her cousin has been captured, which forces Mer to go to one of the leaders of the Sym gangs for help.  Being that Lucas is part of that gang the leader organizes a negotiation with the opposing gang.  After some tense back and forth, terms are met and Lucas is to be returned.  Back at where Lucas is being held captive, Nuon arrives and attempts to neutralize the captors, but she is unable to overcome their telekinesis powers and is forced to impale Lucas.  Later, Mer and the others arrive to rescue Lucas and find him near death.  Mer attempts to heal him, but it’s not clear if she’s successful or not.

The best part of this issue is easily the negotiation scene.  With both leaders of the gangs feigning cordiality and calmness, while also taking not so subtle jabs at each other really sets the tension at a high level. Being that the results of the meeting could determine the destiny of both of the gangs, the stakes are high and they’re treated as such. It truly comes off as a chess match between two equals that have both respect and pure disdain for each other, and it’s written beautifully.  As for the rest of the issue, it’s not bad by any means and does a satisfactory job of continuing the ongoing plots and adding a nice wrench into the proceedings by the end.

One of the issues with black and white comics is that if there isn’t an attempt at using shading and shadows, the art can come off as just black lines on a white void, which is what we get here.  Not that it’s not hard to tell what’s going on and who’s who, but there’s a level staticness here that makes everyone feel stiff and featureless. The effect for the powers is effective and looks pretty neat looking, especially the x-ray powers, the squiggly white lines on the black background is a nice touch.

Bottom Line:  A Good Issue Elevated by A Specific Scene

There isn’t a lot wrong with 20XX #4.  There also isn’t much that makes it standout, except for the extraordinary negotiation scene.  Also, the black and white color scheme doesn’t do the book many favors and actually detracts by being flat in comparison to the dialog. 3 out of 5

20XX #4 manages to carry on the ongoing plot effectively, while also having a moment of it’s own to set this specific issue apart from the others.