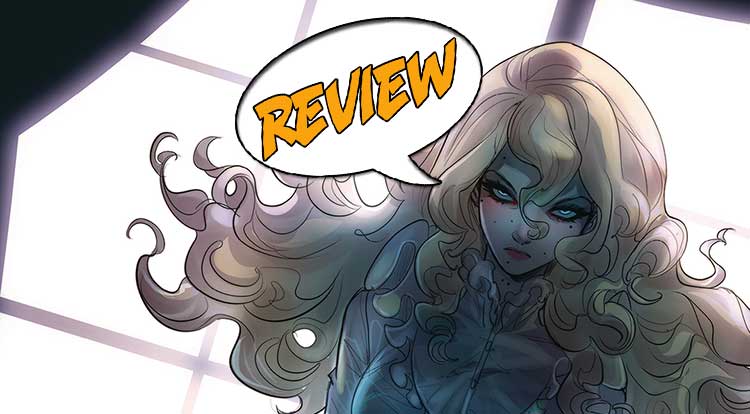 No sooner does Lady Hellaine arrive in Woodsbrough than she throws a party, establishes herself as a rival to Lady Swanson, and then things get strange. Curious? Check out Mirka Andolfo’s Mercy #2 from Image Comics! Previously in Mirka Andolfo’s Mercy: A horrible event happened in Woodsburgh, WA in the 1800’s. There was something monstrous in the mine outside of town, and several people died. The only recourse was to blow up the mine. Now, years later, on the anniversary of the explosion, people still talk about the Devil of Woodsburgh in hushed voices. Lady Swanson, there at the mine disaster, is now a wealthy widow with three children. She’s a fine, upstanding citizen, who also happens to own a local brothel and have some shady connections. A little orphan girl, Rory, is a Dickensian child laborer who dreams of the lovely blonde mother she’s never known. And long after curfew, a coach comes into town with an older manservant and the beautiful, but decidedly odd, Madam Nolwenn Hellaine.

WHAT IF THE MONSTER IS ALREADY HERE?

We leap right into the story in Mirka Andolfo’s Mercy #2 with Rachel, a patient from the local asylum, running barefoot through the snowy streets after curfew. She ducks into an alley as the nurse and doctor chasing her stop, see something, and flee. Rachel turns to see a woman lying dead with a strange creature growing out of her body. She touches this thing, and it takes her over. And a narrating voice reminds us of the Devil of Woodsburgh.

In town, Lady Leila (who appears to be a servant) fixes breakfast for Nollwenn Hellaine. She wants to bring breakfast up to her, but the elderly gentleman stops her – he will do this himself. Nollwenn looks human, and she is able to speak, but she does not seem fully human, and the man continues to lecture her on things she must remember, such as going to bed even if she doesn’t sleep. She has been trying to sense other presences in town but has been unable to find them.

Lady Hellaine is a fast worker. That very day, invitations go out around town for a party, and one of them is directed to Lady Swanson. She decides she will attend, and her children beg her to come along. Her little girl wants to wear her favorite party dress – but it has been torn. This leads to one of the more contrived events in the story. Lady Swanson’s black servant Jon knows someone who can fix it (the orphan Rory).  She can do it, if she risks skipping her actual job. She finishes the dress – but just too late, so Jon doesn’t pay her.

This leads to the next scene, when everyone who is anybody is at Lady Hellaine’s party. It’s all very fancy, and then Rory runs in, shouting for Lady Swanson. She shows her the dress and asks to be paid. As Jon takes her in hand to steer her outside, they are both in time to see the arrival of their hostess, who is blonde and beautiful, and covered in dark freckles which Rory thinks of as stars. Lady Hellaine is a magnet for several young men, but she seeks out Lady Swanson. She asks her about her husband’s research and talks about her own desire to expand her business in town. Plainly there are undercurrents. Lady Swanson leaves her, and Lady Hellaine’s manservant wonders if she recognized her. Jonathan is still here and interrupts them to talk to Nollwenn. He feels like they’ve met before, and she has a momentary reaction to him. Rory rushes past, out into the snow, and Lady Hellaine follows her.

Their meeting is important, but the setup for it felt convoluted. Seeing her up close, Rory calls Lady Hellaine an angel. Nollwenn needs to feed, and it should come as no surprise to us when her face bursts forth with monstrous appendages. One of them comes right up to Rory’s eye, when the child asks, “Mom?” which triggers something in Nollwenn, and the monster recedes, just as Rory’s “uncle” from the workhouse shows up with a bunch of toughs to drag her back, and attack Nollwenn while they’re at it. Nollwenn becomes the monster and kills them all, then goes back to Rory, who again calls her “Mom.” Rory’s Christianity tells her that God is testing her by making her mother seem monstrous.

And yet…and yet…Lady Hellaine doesn’t know what is happening to her and knows Rory can’t be her daughter. They take her in, as part of their subterfuge, but there are more complications for these newcomers than they had anticipated.

Mirko Andolfo’s Mercy #2 has terrific art. Admittedly, the setting looks more like a nineteenth century European city than one in western America. But it’s interesting because we see the contrast between the wealthy and privileged, and those who are poor and exploited. There is so much wonderful detail in Lady Hellaine’s party, her dress, the plates and utensils in her house. There are fringes, and ruffles, and flowers. The wealthy men in town have stiff fronted shirts and wear gloves. Even though we see hints of the creatures early on, there’s something more dramatic about seeing their intrusion from someone who so perfectly masks themselves as being above anything so mundane.

BOTTOM LINE: THE DEVILS OF WOODSBURGH?

Mirko Andolfo’s Mercy #2 is a horror story with some decidedly mature moments to it. It’s building up quickly and almost feels like there a bit too much story for the number of pages. I do like the juxtaposition of the social situations of characters set against a tale about a monstrous takeover.