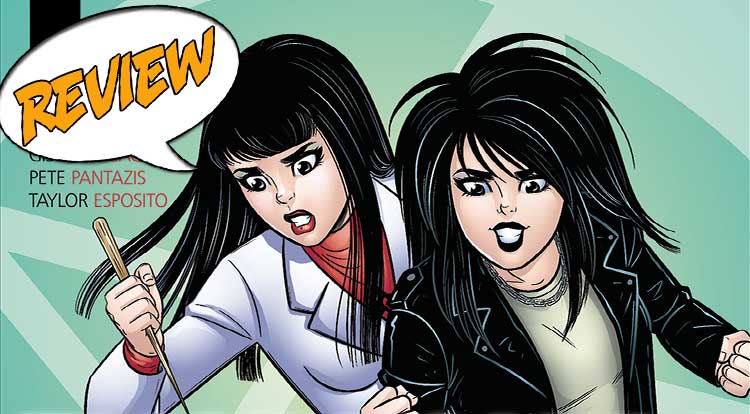 Cate and Kate return in their battle against the ultimate evil! Can Cate find her lost soul – Kate – and get back to Earth and stop the First Shadow? Find out in Exorsisters #6 from Image Comics!

Previously in Exorsisters: Cate and Kate are investigators who specialize in the supernatural, and particularly in the demonic. Although at first they seem to be sisters, it turns out that, due to a complication with a demonic contract, Kate is actually Cate’s soul, and they were separated in an incident where their mother gave Cate’s soul to Hell. But their plight is secondary to what else is going on. The angel Gabriel has fallen to Earth; Cate’s ex is a demon; and the First Shadow has arrived on Earth, wanting to simply go back to nothingness. Although apparently it is willing to cause some havoc along the way.

SUCKED INTO HELL…OR MAYBE NOT

They’re back! Exorsisters #6 opens on Cate remembering that fateful day, back when she was thirteen. She hears an odd noise, smells a horrible odor, and steps into the hall where two demons have arrived to take her soul. It’s a clever way to sneak in a retelling of the setup as the main story continues, because while we know her mother was responsible for all of this, this memory is different. Here, Cate’s mom saves the day and rescues her – but our Cate is stronger than that. She recognizes that this is what she’s always wished for, but she knows it is not true. It turns out she’s in Heaven and she is pissed that the angels there are trying to take her memories away from her, even the painful ones. And she wants to find Kate.

Cut to Kate sitting on the throne of Hell playing a guitar while a couple minions await her command. There’s an amusing interlude with a billionaire who is the epitome of spoiled privilege. Her minions think she’s wonderful. It’s everything she could have dreamed of – except she, too, has figured it out. There is no blaspheming here; she, too, is stuck in Heaven and is getting fed up. And right about then Cate arrives.

They kidnap an angel, sort of, and flee and find a place to hide out for a while as we get caught up on the plot – angels touching the darkness and falling to Earth, the First Shadow being out and about, etc. As luck would have it, some angels like to sneak down to Earth now and then, so he shows them the way.

Meanwhile, back on Earth Gabriel has made a deal with the First Shadow in order to get wings, but he managed to slip away briefly while the Shadow was distracted. Gabriel can sense that the girls are back, but they aren’t in their office. Buzz is, and wants to make a deal to be let out of the glass jar he’s trapped in.

The First Shadow, who is with Cate’s mom, summons Gabriel back. His first stolen body (Drew, I believe) is weakening and he’s grabbed some people in order to take on a new one. Horrifically, he asks his next victim to give him permission to do so, and then uses threats to coerce her into giving him permission. And then Cate and Kate arrive on the scene.

The art and the coloring of Exorsisters #6 work together beautifully. I love the clean linework and the attention paid to each of the main characters. Secondary characters are interesting, but don’t pop as much as the main ones do. Opening with Cate at thirteen (nice symbolism there) is fun – we recognize her, but she looks much younger than the Cate we’ve been following. The color palette of the memory is muted gray tones, but connecting with the rest of the story, red, though also subdued, are clearly red. When we transition back to Cate in Heaven, the color comes back with scarlet red and she immediately stands out.

For all the drama of the First Shadow at war with Heaven and possibly Hell, there are threads of humor throughout. When last Buzz and Gabriel met, they were at each other’s throats. Now the angel who fell is a little more fallen, and Buzz is a little more humble and helpful. (Living in a glass jar for a week like the world’s largest lightning bug may do that to a demon.) I like that Gabriel is wearing a coat over his robes in an effort to blend in, and Buzz looks for all the world like a cartoon bug trying to stay out of trouble.

BOTTOM LINE: NOT ALL FUN AND GAMES

As we begin this second arc in Exorsisters #6, the stakes are serious. This is a decent jumping on point, but this is not a carefree mystery of the week story. Some of the biggest powers of the universe are making their moves, and Cate and Kate are in the center of it all. And talk about both the closeness of sisters, and the chains that bind a dysfunctional family. There are some heavy threads here, but the humor does work to lighten things up a touch.