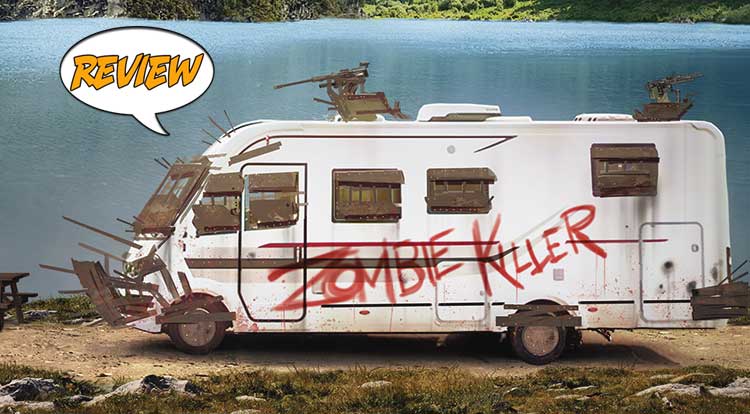 Who can you trust in a world where the dead walk?  Your Major Spoilers review of Year Zero #1 from AWA Studios Upshot awaits! Previously in Year Zero:  A Japanese hitman, a Mexican street urchin, an Afghan military aide, a Polar research scientist, a midwestern American survivalist – five survivors of a horrific global epidemic who must draw upon their unique skills and deepest instincts to navigate a world of shambling dead…

“THE PLANET IS GOING TO HELL…”

We start with a flashback to one year in the past, as a polar research scientist unearths something strange within the ice: A frozen humanoid who looks ominously emaciated and unwell. Cut forward to “Now”, whenever that is, as a young boy named Daniel searches for food in the streets of Mexico City. Daniels mother always taught him that his suffering on Earth, would be rewarded in the afterlife. Cut to Tokyo, where an assassin named Saga explains tenets of Buddhism while preparing to kill his latest target, explaining that any of his targets are only getting what they deserve. Then, in Kabul, a young woman named Fatemah tries to get American soldiers to smuggle out a number of abused and endangered young woman in her care, marveling at how America itself sometimes seems like a god. Then it’s on to Minnesota, where a smug survivalist named B.J. explains how nothing matters, because God and the afterlife don’t exist.

Or at least, that’s how he feels until the chaos and blood begins.

I have to say that I love the cover of this issue, fully painted and almost photo-realistic, and while the art inside isn’t quite to that level of representativity, it’s quite good. There is a clear sense of place and setting in each area (although it seems a bit suspect that we hit right in the middle of the Day of the Dead parade in Mexico City) and each one of our characters is visually distinct and fully realized. I had some issues following the storytelling from panel-to-panel in places, though, and the eruptions of horror (blood-covered windows, a body falling from a window, fires in the distance) are almost too subtle when they begin. As the issue continues to build it’s background horror and move it to the front, though, it becomes clear that the apocalypse is upon protagonists whether they’re ready or not. There’s also a final segment, set in the year 1490, showing us the “lost pages” of da Vinci’s notebook, explaining how his famous Vitruvian Man is actually a diagram of a zombie that he was dissecting.

The frustrating part of this issue is that it’s just not a fully realized chapter on its own, but just a piece of a larger narrative that just sort of ends, without much more to unite our characters than the impending end of the world. Year Zero #1 has a lot of things going for it, including some strong, fully-realized characters, art that’s more successful than not and a broader canvas than most first issues, but the unrelated nature of these threads and some storytelling issues affect my enjoyment, leaving the book with a still above-average 3 out of 5 stars overall. I will say that this issue is strong enough that I’m willing to commit to all five issues based on what I have seen here, and I hope to see what all these people have in common.

The five (technically six) vignettes here are full of character and life and while they're engaging, it doesn't quite cohere.