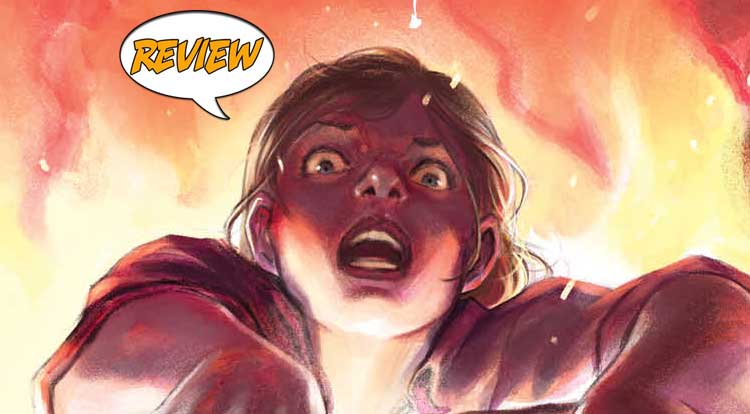 Buffy Summers is dead…  again.  But what happens this time?  Your Major Spoilers review of Buffy The Vampire Slayer #14 from BOOM! Studios awaits! Previously in Buffy The Vampire Slayer: After a being called the Hellmother possessed the minds of all the men in Sunnydale, Xander Harris sacrificed himself to save Willow, who left town once the danger was past. Worse still, Buffy’s brief foray into the afterlife called up her replacement, Kendra, who has come to Sunnydale and made things even more complicated. Can Buffy rebuild her life without the friends that were such a huge part of it?

Oh, and also, more hellmouths will probably be opening around the world.

THE HELLMOUTH IS CLOSED…

Buffy Summers starts this issue in a place we usually don’t see her: Alone. Sure, Robin Wood, disgraced Watcher, wants to hang with her and fellow Slayer Kendra wants to spar, but it’s not the same. Even her mother wants to bond with her and make sure that she’s okay, but Buffy’s just not having it, even when Giles wants to train his Slayers for the upcoming threats (which he expects will be multiplex.) Buffy decides that, since everyone is going to leave her anyway, she might as well start rejecting them preemptively. It works to alienate her mother, but when she tries it on Robin, he refuses, instead planting a huge kiss on her, to which she simply responds, “Oh.” Elsewhere in Sunnydale, Jenny Callendar leaves Giles alone, citing how unfair it is that he gets to have a mostly normal life while his Chosen One charges have to risk their lives over and over in his stead.

Oh, and a familiar-looking witch teleports into a field somewhere in the world, which seems like it’s gonna be important down the line.

…BUT THERE ARE MANY, MANY OTHERS

The real star of this issue, once again, is the art of Julian Lopez, from the very first page of the issue. It’s a nine-panel grid with nine different images of Buffy expressing different emotions, from joy to irritation to sadness, and each one is perfectly rendered and looks great. Much of the book consists of conversations, making it even more critical that the art be lively, and Lopez nails it all, with the heartbreak on the face of Joyce Summers serving as peak. Since we’re in one of the “in-between” times, there are vampires or monsters to be faced, but Buffy’s distress makes for an engaging issue, especially with the promise of romance on the horizon. (Just remember: He’s not the principal in this reality.) Bellaire’s script understands that the teenage drama is just as important to BtVS as any cemetery fight, and this issue shows it.

All in all, Buffy The Vampire Slayer #14 sets the stage for a different sort of Buffy status quo, and while it might feel a bit slight in terms of action or world-shattering dangers, it’s a solid dramatic issue with really impressive art, earning a better-than-average 3.5 out of 5 stars overall. This creative team continues to remold the Buffy we know into something different, without destroying what makes it Buffy, a difficult proposition in itself.

There's some storyline housekeeping to do in these pages, with a surprising kiss and a new Scooby Gang to build, making for the proverbial palette cleanser issue.