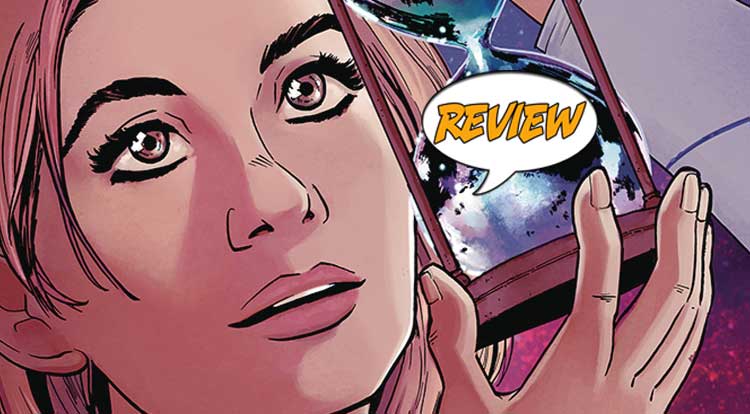 Two Doctors, no waiting!  Your Major Spoilers review of Doctor Who: The Thirteenth Doctor Season Two #4 from Titan Comics awaits! Previously in Doctor Who: The Thirteenth Doctor Season Two:  It all ends in a…  blink!?  With the Tenth and Thirteenth Doctors finally together, they might actually stand a chance of surviving the swinging sixties.  But with Weeping Angels surrounding the Tardis, and Autons not far behind, temporal paradoxes might be the least of their worries!

After a visit to Woodstock went horribly wrong, The Doctor and her fam ended up in London, circa 1969. Not at all coincidentally, it’s the era where her Tenth incarnation was stranded by the Weeping Angels, who have found an interest in capturing her TARDIS. There’s also a problem with Autons in London again, leaving the TARDIS team(s) in between a rock monster and a hard plastic place. With a little ingenuity, Ten and Thirteen manage to sneak into the Nestene hiding place, making a scene of themselves in a very entertaining manner and also drawing the Angels to their location. The Weeping Angels transport the Nestene Consciosness away, depriving the Autons of their central hive-mind, then trap the Weeping Angels in a truly inspired mirror trap that forces them all to look at one another and rendering then inert. After ditching them in deep space, she returns Ten and Martha Jones to the scene of their exile and takes her companions home… where things are NOT right.

I INITIALLY THOUGHT THIS WAS A TV TEAM-UP

When news of this crossover story broke, I misunderstood it as being for the TV show, but I have to admit, this series has been a pretty entertaining ride in itself. Houser’s script is filled with clever bits of dialogue (Thirteen uses Ten’s “I’m so sorry” line when she explains to Martha that she can’t take them home yet, as it’d cause a paradox) and uses the continuity quite well, referencing a number of past stories, at least one of which is still in Ten’s future. Thirteen even sees how in love with her previous self Martha is and remarks how thick she used to be. As far as the art goes, I enjoy Ingranata’s minimalist art style, which conveys the important landmarks of characters’ faces without trying for photo-realism, thus avoiding the overly-posed stock photo references that are sometimes a problem with licensed characters. Ten and Thirteen both look great, and while some of the companions don’t have as strong of likeness for their actors, they still have a wide range of expression and emotion.

BOTTOM LINE: NOT SO FAST WITH THE HAPPY ENDING

Even if I’m disappointed that this series doesn’t mean David Tennant joining Jodie Whittaker on the BBC, Doctor Who: The Thirteenth Doctor Season Two #4 hits a sweet spot for me in both art and story, giving us a fast-paced, exciting multi-Doctor tale that feels like a final chapter until it doesn’t, crossing time streams with skill and earning 4 out of 5 stars overall. I’m actually happy to find that there’s more of Ten coming next month, but even more so that he’s traveling with Martha, the most underrated companion of modern Who.

The Titan team knows how to craft good DW comics, and this crossover is a fun one for both versions of the Doctor, with strong art and a clever use of characters. I'm kind of glad it's not over.