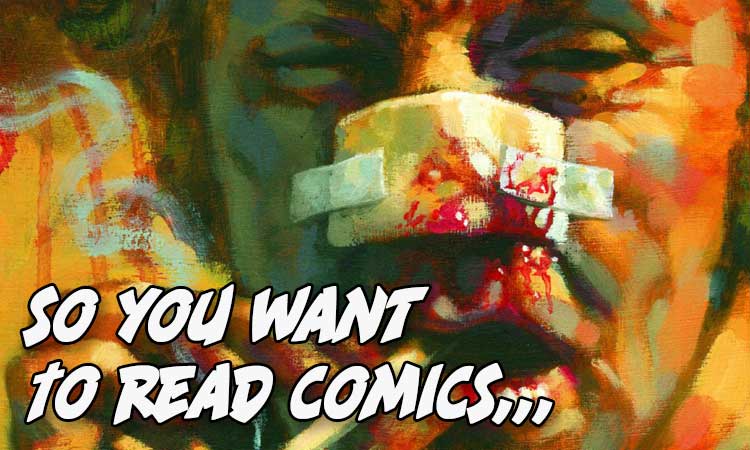 So You Want To Read Comics – Crime Part 3

It’s time for another installment of “So You Want To Read Comics”, the weekly feature that offers easy ways to get into comic books.  This week we’re finishing up our series of recommendations for people who love the crime genre.  For this installment, we’re focusing on comics that are similar to crime fiction from the 90s to today.

As always, the first step is to identify a couple of themes and trends that gained prominence during this time period. One of these is the emergence of super stylized, kinetic, dialog heavy, crime stories.  We’re talking about creators like Quentin Tarantino and Guy Ritchie, even Oliver Stone got into the fun with Natural Born Killers. The other trend that deserves to be singled out is the revitalization of the heist film.  There’s no denying that after falling away in the late 70s, the heist came back in a big way: Heat, all of the Ocean’s 11 films, a remake of The Italian Job, even Star Wars got in on the game with Rogue One and Solo.

So, with that out of the way, let’s get to the recommendations.

The team up of Ed Brubaker and Sean Phillips has led to some of the greatest works of crime fiction, regardless of medium. They’re work has gone from old-school noir, to western, to supernatural, but it’s their flagship series Criminal that really shows off their chops.  With the first volume titled “Coward” we get introduced to Leo, a career thief with a strict set of rules, who is tasked with planning and executing a heist.  It’s a pretty simple setup, but what makes this a wonderful read is how his team that he puts together all have their own motives and loyalties and when those start to come into conflict with each other the action and intrigue ramps up and doesn’t let up.  Just seeing how “the plan” comes together and how it goes down is entertaining, but then watching as wrinkles get added in and true intentions are revealed sends this story into a twisted and violent realm that will feel familiar to fans of Pulp Fiction or Heat.

One of the best things about comics is that it’s a medium that handles “high concept” better than most others and Sex Criminals has a concept that definitely benefits from being in comic form.  Basically, the two main protagonists, Suzie and Jon, both have the ability to freeze time whenever they orgasm. This of course eventually leads them to the conclusion that they can use this ability to rob banks.  It seems simple enough at first, but they quickly realize that there’s a lot they don’t understand and are probably in way over their heads.  If a comparison were to be made it would be something like Lock, Stock, and Two Smoking Barrels. Not only do we have a central plot about rookie crooks getting wrapped up into something well out of their league, there’s also a comedic approach mixed with 4th wall breaking narration, jumps in time, and scenes played out multiple times from different perspectives. This is the sort of comic for people who like it when the crime itself takes a backseat to clever and funny characters interaction with each other in strange situations.

What do you think? Did you check these out and like them? Or did they not do it for you? Do you have your own suggestions? Let us know down in the comment section.