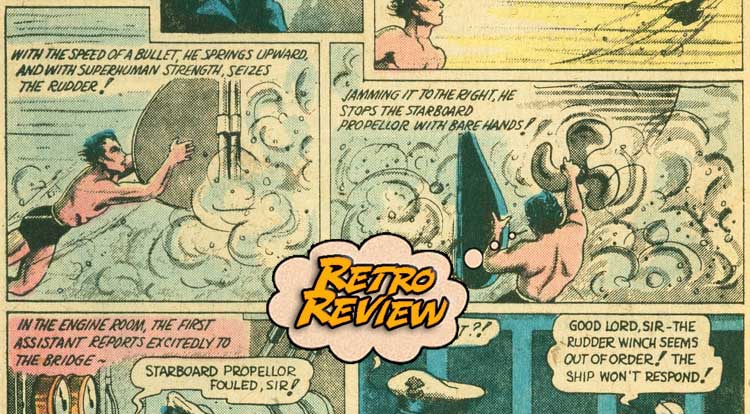 Most fans know that the Marvel Universe begins with Marvel Comics #1.  But one Marvel hero (sort of) predates even that!  Your Major Spoilers (Retro) Review of Motion Picture Funnies Weekly #1 awaits! Previously in Motion Picture Funnies Weekly:  During the Golden Age of Comics, a number of creators formed their own publishing concerns as packagers, creating and selling their content to the many publishers interested in getting comic book content to newsstands.  Will Eisner and his partner Jerry Iger were among the early pioneers of this practice, and First Funnies Inc. (aka Funnies Inc.) created this issue, a comic designed to be given away free of charge at movie theatres.  It was never actually released, though a number of copies of #1, as well as covers for the next three issues, were printed and still exist today.  Editor Lloyd Jacquet was able to resell the material to Martin Goodman, who wanted to get some of that sweet comic-book money, leading Funnies Inc. to create ‘Marvel Comics #1’ later in the year.  But Motion Picture Funnies Weekly is, in the strictest sense, the first appearance of an important Marvel superstar… The crew of the salvage ship Recovery is puzzled to find that the wreck they’re working has already been stripped of some of its valuables.  There’s not record of other ships in the area and they’ve seen no sign of other crews in the area.  Their men go down once more and are surprised to find that hatches they left sealed are suddenly open, and venture inside to figure out what in the world might be going on. A strange figure wearing not so much as a scuba mask atacks, slashing their air hoses ruthlessly and attacks, crushing one man’s head with his bare hands (!!).  Discovering that their divers have been killed, the ship makes a run for it, only to have the mysterious undersea man jam their rudder, causing the ship to ram into the rocks and break in half in a massive explosion, almost certainly killing everyone on board.  Below the waves, their killer has only a smirking sense of his own cleverness. He is Namor, not yet a prince as far as I can tell, who proudly drags home the bodies of his kills in a manner that would define him throughout his entire history.  (Remember, he’s the man who flooded New York City and presumably killed millions only a couple of years after this, and he has decleared war on the surface world something like a dozen times over the years.)  Bill Everett was a truly gifted artist, and this story shows off his amazing draftsmanship and layouts, but also gives the Atlanteans some massive, unnerving eyes, especially Namor’s mom Fen. As her son wonders what makes the surface folk so bad, Mama Fen tells us his origins, reminiscing about the time she was rescued by a pink skinned surface man who tried in vain to help her.  She even refers to her people as “sub-mariners”, making it seem like it’s a common term rather than Namor’s personal nom de guerre. Panel five gives me the creeps, Faithful Spoilerites.  I just don’t like it.  In any case, Fen explains to her son the cruelty of the humans and the need to avenger their undersea people on the evil air-breathers, setting him off on a crusade that continues to this day.  It’s interesting to read this story (which, when it appeared in Marvel Comics #1 was expanded by several pages) more than 75 years later and see how much of Namor’s back story and ephemera has remained essentially unchanged.  Compare it to Action Comics #1 or Detective Comics #27 and it’s clear that Motion Picture Funnies Weekly #1 had Namor already fully realized, leaping from Everett’s head like Athena from the brow of Zeus, with some excellent art (especially for the period) putting it over the top for 4 out of 5 stars overall.  This also means, friends, that the first Marvel Comic wasn’t exactly a Marvel Comic at all, a little bit of trivia that you can toss out next time you’re playing a game of “Um, ACTUALLY…” with your nerd friends.

The visionary styling of Bill Everett make it clear how much of Marvel Comics was about the creators and not the company, and even with some big creepy fish eyes, it's a solid read.