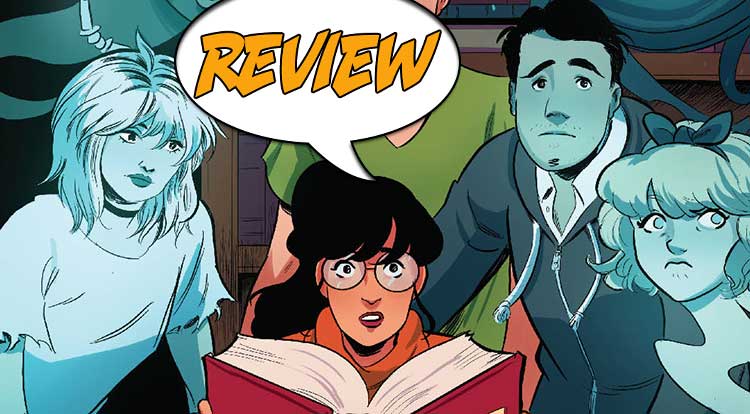 Just when everything had settled down, a mysterious force in the basement of Rycroft Manor pulls Agi away and upsets everything! Intrigued? Find out more in Ghosted in L. A. #10 from BOOM! Box.

Previously in Ghosted in L. A.: We learn about Michelle’s past, her seriousness about Christianity, and her drive to be perfect. Back in the present, Michelle’s investigations into Daphne and her talk of ghosts leads her to a New Age bookstore and the Center for Philosophical Research. By chance, she spots a strange glowing thing and after following it, she sees Bernard. At Rycroft Manor, Shirley is adjusting to being unable to move on, but there is conflict between Ricky and Zola. This blows up further when Ricky finds inky drawing all over his walls – similar to Zola’s manifestations. But Daphne recognizes it as the same writing she saw in the basement near the door the ghosts cannot go through – and Agi gets sucked in through this same door!

THEIR CORNERSTONE IS GONE

After such a cliffhanger, it’s a big shift to find Ghosted in L. A. #10 opening in the 1960’s with Pam’s story. Pam was young when she died, but now we know for sure has been at Rycroft longer than most of the others. We see her arrive, floating over the pool, disoriented and unable to feel her body. Agi is already a ghost, and she is talking with Harold Palmer, the human (and very alive) owner of the Manor. As they calm Pam down, the surface of the pool water turns inky, and Agi makes an excuse and goes off to the basement to fix it. How deft is this, to show us that the thing in the basement has been there a long time, and that Agi has been hiding it!

But Agi is now gone. She may seem very constrained and harsh, but she is the heart of Rycroft Manor and is a rock where all the ghosts are concerned. She’s helped them to adjust and she holds the place together, making sure they have a place to live, and now she is just…gone. Everyone’s first reaction, including Daphne’s, is falling apart just a bit, except for Pam, who remains calm and claims it’s just old house problems. Because this is what Agi has always said and it never seemed to be anything to worry about. This gets everyone’s attention, and Daphne asks her to try to remember all the strange incidents over the years that Agi blamed on “old house problems.”

On campus, Michelle is carefully gathering up her tools – candles, vials of holy water, a rosary, a cross – and a dagger. Spying on Ronnie, helping set up for the LGBTQ prom, she hears him mention Rycroft Manor.

We learn that Mr. Palmer and Agi fell in love, and he is still alive and covering the bills for Rycroft. Pam’s memories reveal that the strange “outbursts” happen when new ghosts arrive. But Pam, though old in time, is still a teenager at heart and never really paid much attention to what Agi did when she fixed these problems. Zola has the idea to use her ink powers to see if there’s any way Agi can use them to communicate with them. An image and a word trigger a memory for Daphne, and she finds a key in Agi’s things, a key that she cannot touch, but the ghosts can.

Plainly they want to investigate. Daphne does too, but they vote for her to stay behind for her safety, all except for Pam, who is briefly possessed by the evil spirit who apparently wants Daphne even more than the ghosts. There’s a brief battle and they fend it off. Zola gets her out of the house by sending her off to Ronnie’s dance, with Bernard keeping an eye on her as she heads out. Meanwhile, Michelle arrives at Rycroft Manor.

THE UNSEEN BUT UNNERVING HORROR IN THE BASEMENT

While this started out as a light and charming ghost story, Ghosted in L. A. #10 takes a serious turn, giving us a mysterious horror in the basement. Up until now, its manifestations have been mainly inky writing, but perhaps it has also been poking at the other ghosts’ nerves, spiking tension between them. It’s a particularly nice touch that we start out with Pam’s story and get to know her as a teen who died in a car crash and see just how young she is. When she’s possessed, we can instantly tell that whoever is behind her face in that moment is not her anymore and it makes it a bit chilling despite not being gory.

The character work is so lovely. I’ve always liked how the ghosts encapsulate the time periods in which they lived, but this time we also get the fun of seeing them all disjointed and falling apart. They may be ghosts, but they’re human to the core. It’s heartwarming seeing them pull together to try to figure this out on their own. And I love seeing Michelle who is being drawn deeper into the plot. She is organized, methodical, and focused like an arrow, and this comes through in every panel.

Ghosted in L. A. #10 is a pretty strong issue. The story has thrown out little hints of something bigger to uncover, and now I think we’re accelerating toward the end. Every character has their own part to play, and they’ve all been important, and everyone has room to learn something.