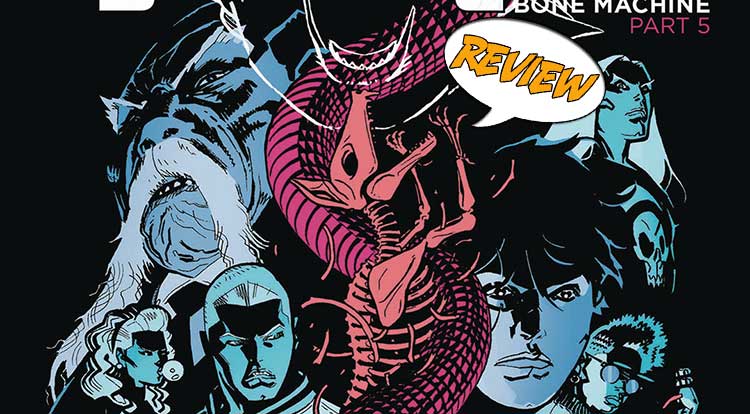 The students of Kings Dominion Atelier know how to throw a party, and have one thrown at them.  When the cultists barricade the cabin and set it on fire, it is every student for themselves as they scramble and fight to survive.  Who lives and who dies?  Find out in your next Major Spoilers review! Previously in DEADLY CLASS:  Kings Dominion Atelier of the Deadly Arts is no Hogwarts.  Students live and occasionally die, amid a whirlwind of drama, betrayal and violence.  But everyone deserves a break, and a party in a cabin in the woods, surrounded by snow and the endless night, should’ve been an opportunity to let their hair down and simply enjoy life.  But the cultists came gunning for them and now it’s all gone to heck.

BURNIN’ DOWN THE HOUSE

Wow.  DEADLY CLASS #44 starts in flashback mode, developing Marcsus’ backstory just a little bit more, before all that is put to the torch.  The party in the cabin in the woods attended by the students of Kings Dominion has gone badly awry – blocked from escaping, with the building on fire, the survivors of the cultist’s attack must find a way out not only of the inferno, but the ring of crazed cultists eager for blood.

The contemplative start to DEADLY CLASS #44 slowly morphs into the main action of the story, demonstrating writer Rick Remender’s excellent sense of pacing, and use of symbolism to add depth and character to his lead, Marcus.  Remender demonstrates his storytelling chops by combining furious sequences of fight scenes, with character moments in lulls in the battle that carry weight and repercussions for future issues.

For instance, when Viktor goes after Brandy’s kidnapper, Jayla chases after him.  Viktor killed Jayla’s brother Willie, and despite them having a common enemy in the cultists, Jayla uses this opportunity to gun Viktor down.  There is a moment, just a sequence of several panels, where Viktor apologises for killing Viktor that it looks like Jayla will let him live.  This is also where Wes Craig’s artwork comes to the fore.  Her head and eyes drop, and a look of bitter defeat fills her face, before she raises her gun and shoots Viktor dead.  The next sequence of panels, where she sheds tears, but she breaks into a smile.  It’s a really powerful sequence.  Amidst the mayhem, there are other character moments like this that make DEADLY CLASS #44 not just a fight fest, but a well thought out drama as well.

The main entertainment from DEADLY CLASS #44 comes from the action sequences.  Craig and colorist Jordan Boyd no how to put on a brawl.  The frenetic chaos and freewheeling combat sprawl across page after page.  There’s a real kinetic energy, despite the static images, as Craig uses the page to display multiple fights between combatants.  The reader’s eye is drawn all over the page as outbreaks of fighting constantly flare up.  Again, well constructed scenes, such as a katana wielding character stabbing a cultist to death, with the cabin burning in the background, are simply gorgeous to look at, as well as having a high energy quotient that commands your attention.  Flames leap into the sky, smoke roils across the page, and a madman dies impaled on a sword.

If DEADLY CLASS #44 had simply been all action, it would’ve been a visual delight quickly forgotten.  The meshing of very good, dynamic artwork, and character moments, mean that the story isn’t just a one night wonder.  Instead, like all good drama, it advances the plot, sets up plot hooks for future issues, and is also damn fine entertainment.

DEADLY CLASS #44 in a lot of ways is a wish fulfillment fantasy.  Kids from criminal families attending a finishing school for evil masterminds upends the Hogwards magical school trope.  These kids get to say and do whatever they want, often with violence as their method of settling scores.  Understandably, books like this aren’t for everyone.  But if you want the safe escapism of mass violence involving fictional characters, DEADLY CLASS #44 is hard to beat.

A fun, furious extravaganza of violence and action, DEADLY CLASS #44 feels a lot like an extended action sequence from a movie aching to be made. While the powers that be and money men work out how to get Deadly Class onto the screen (again) one can only sit back and enjoy the thrill ride of this, and future issues to come.
Deadly Class Image Comics Jordan Boyd Review rick remender Rus Wooton Wes Craig Will Dennis
Share. Twitter Facebook Pinterest LinkedIn Tumblr Email
Previous ArticleMajor Spoilers Question of the Day: Super-Speed Or Teleportation
Next Article Hawkeye: Freefall #5 Review