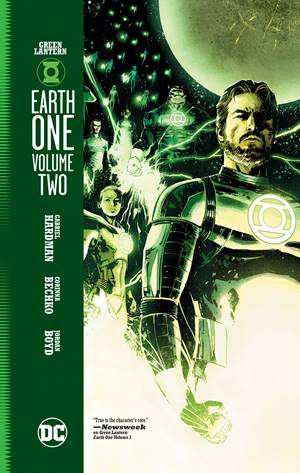 DC Comics has announced that the anticipated second volume of Green Lantern Earth One is scheduled to arrive in July 2020. Manhunters, alien races, rings of power—it’s a lot for the people of Earth to absorb. Especially when an interplanetary incident forces their protector, Hal Jordan, to leave on a rescue mission that results in the discovery that there’s a new player in the galaxy: Yellow Lanterns! In this sequel to Corinna Bechko and Gabriel Hardman’s bestselling 2018 original graphic novel Green Lantern Earth One, Hal Jordan and John Stewart must team up to save the galaxy from an invading force!

Conscripted into service, the Yellow Lanterns are uniformly made up of inhabitants of the planet Qward, located in the parallel dimension where the Guardian “fled” to escape the Manhunters long ago. While they seem a benign force for peace, Jordan can’t get comfortable with how much power they wield, or their bizarre, lockstep behavior. When fellow Earthling John Stewart ends up with a yellow ring, he and Hal must work together to confront the being who destroyed the original Green Lantern Corps—the last surviving Guardian.

OoooooOOOOoooooOOOOOooo… I heard really good things about the first volume, so I am very interested in grabbing this volume by Corinna Bechko and Gabriel Hardman when it arrives on July 28, 2020.