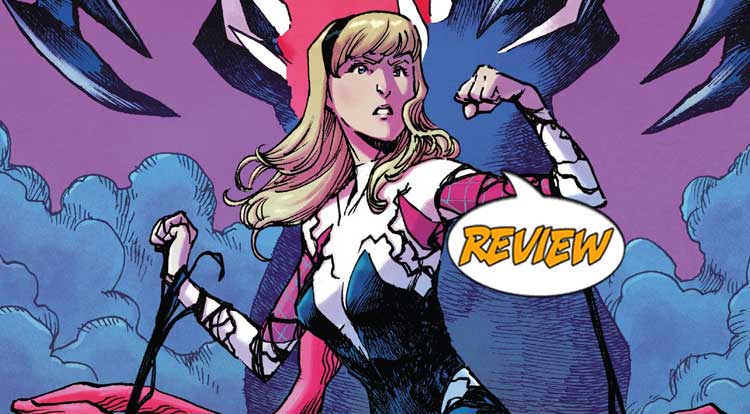 Ghost-Spider teams up with Sue and Johnny Storm but… aren’t they dead?  Your Major Spoilers review of Ghost-Spider #9 from Marvel Comics awaits!

Previously in Ghost-Spider:  It’s an interdimensional tour for Gwen Stacy and the Mary Janes… but just as things start going right for Gwen outside of the webs, something unsettling is happening to her suit.

First thing you need to know about this issue: The solicitation is entirely wrong.  Secondly, Ghost Spider is the hottest thing on social media!  That’s a little bit weird for her, since she’s not actually on the site in question, but when the Storm siblings, hottest influencers around, invite her for a team-up, she just can’t say no.  Well, she can, and initially, she does.  After a discussion with her dad about the current situation on Earth-616 (where the events of the ‘Outlawed’ crossover have made it illegal for a teenager to be a superhero without an adult sponsor), she takes to the rooftops of Earth-65 New York.  Crime is in short supply, but her phone keeps buzzing with people excited to see her team up with the super-siblings who just returned from Latveria, and so she finally caves and makes her own account on the unnamed site to accept their request.  The Storms get her response while they’re disposing of the body of their mother (which is a truly impressive scene, both subtle and creepy at once) and the three heroes meet up to bust a shipment of drugs to Man-Wolf’s gang.  All goes well, and the issue ends with Ghost-Spider happy to have pals, while the Storms muse about how “no one will believe her.”  That bodes badly…

This run of Ghost-Spider has been a mixed bag for me.  I enjoy the premise of crossing universes, even as I feel like it’s designed to let Peter Parker’s popularity rub off on Gwen, and the stories have had a lot of nuggets of interesting in them.  That said, this issue continues with the sloooow pacing, building and building up that fact that Sue and Johnny aren’t what they seem to be in a way that feels like it could have really been tightened up.  This issue of Ghost-Spider is one of the books that Marvel has transitioned to digital-first, with collections down the line and no word on if and/or whether they’ll see a print version, which makes me wonder if the writing is on the wall for Gwen Stacy.  This issue’s story is good, albeit slow, and while Ig Guara’s art doesn’t particularly appeal to me, the story-telling is solid and it’s always easy to tell who’s who and what’s going on.  It’s very angular and feels weirdly “punk”, which fits the character and what I expect to be her target audience, making it appropriate for the story being told.

BOTTOM LINE: HOPING IT’S NOT THE END OF GWEN

All in all, Ghost-Spider #9 is a solid, is somewhat slowly paced, chapter and while I’m not a fan of the art, I can see it’s appeal and it’s quality, leaving this issue with a better than average 3.5 out of 5 stars overall.  As with Ant-Man, I’m hoping that the end of this volume doesn’t mean the end of the road, even if it means that she appears in big crossover schmageggi is coming out of the Outlawed/Empyre axis, as Ghost-Spider/Spider-Gwen is one of the better new characters of Marvel’s 2010s.