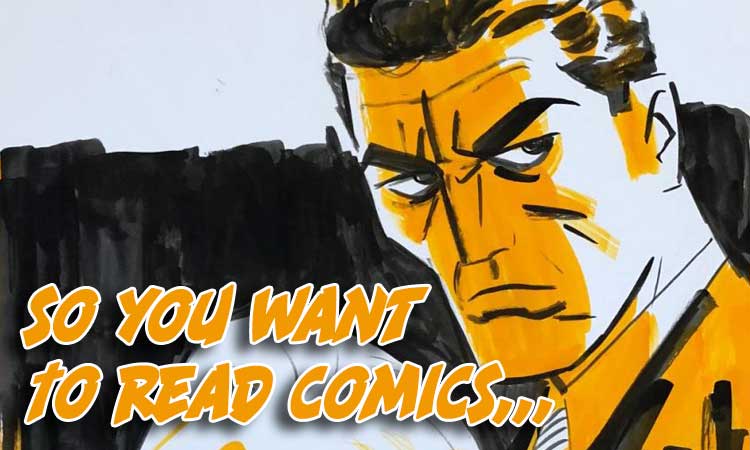 So You Want to Read Comics (Crime Edition Part 2)

Welcome back to So You Want To Read Comics, a feature designed to introduce you to the world of comics as gently as possible.  This week we’re continuing our look at the comics that may appeal to fans of the crime genre. Last week we looked at the early days of the genre in the 20th century (here), today we’re looking at the comics that epitomize the style of crime fiction from the 60s through the 80s.

When it comes to this period of crime fiction there’s two characteristics that really stick out to me.  The first, is the increasing representation of people of color, some good and bad.  It’s during this period that we see the rise of Blaxploitation.  Films like Shaft and Superfly while maybe not being the most flattering of representations, began to shed the light on how things like crime and justice affect minority communities.  The other characteristic that really began to gain traction during this period is the sympathetic criminal.  It’s during this time where we see things like The Godfather, Scarface, and Death Wish gain popularity.  These feature characters that do some really bad things and who are ruthless in a way we hadn’t really seen in a protagonist, yet you almost can’t help yourself from rooting for them.

Alright, enough history, let’s get to the recommendations.

Abbott is a mystery set in the 1970s Detroit.  Race relations are tense and getting worse by the day.  Suddenly, members of the black community start becoming victims of heinous murders and the only one who is willing to investigate is the journalist Abbott.  While one of the main draws of this comic is the blunt way it addresses racial issues, there’s no denying that there’s a solid detective story here that supports everything else. Abbott is a spikey, no nonsense, chain smoking journalist and she approaches everything with these traits on her sleeve.  It’s a joy watching her brow beat her bosses,  shrug off new age hippies, and continually take a non-compromising stance on the things she cares about.  Eventually this story does start to drift into the supernatural, but if that isn’t your thing, just know that the supernatural elements are more allegorical rather than a Buffy or Charmed approach to the subject matter.

Buy this comic via comiXology

Perhaps the quintessential “Get ready to root for the bad guy” story, Parker encapsulates everything we love about characters like Harry Callahan, Jack Carter, Michael Corleon and so forth.  The titular Parker is not a nice guy, he has no problem killing, maiming, threatening, stealing, and lying to get what he wants and The Hunter sets him on a path of revenge to take out those who betrayed him and sent him to prison.  Now, this is basically an adaptation of the original novel, but Darwyn Cooke’s art here brings this tale to life and gives it a style in a way that the original novel couldn’t.  Basically, if you find yourself often pulling for the villains, this is your comic for sure.  There’s just no denying how fun it can be to watch ruthless bad people go after other ruthless bad people, and Parker has this in spades.

And there we have it. Let us know if you enjoyed these recommendations or as always if you have your own suggestions drop them down in the comments.