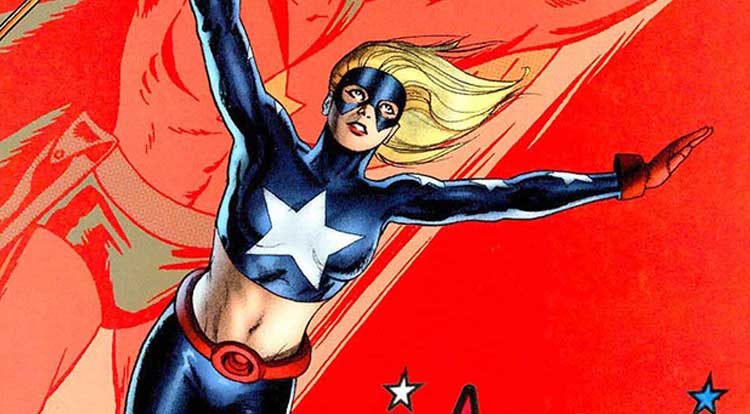 Young paragon, bearer of two heroic legacies and sweet tribute to her creator’s lost sibling.  She’s many things, but most of all, she’s a hero to her core.  This, then, is your Major Spoilers Hero History of Courtney Whitmore, the masked adventurer known as… Stargirl! Courtney’s story beings immediately after a move from Beverly Hills, California (with its various movie stars and swimmin’ pools) to the podunk backwater jerkstore town of Blue Valley, Nebraska.  In the DCU, Blue Valley is best known as the small town that Kid Flash ran away from as fast as superhumanly possible, but thanks to Courtney’s mother remarrying, it becomes her home. The sudden change of venue comes thanks to mom, Barbara, remarrying a man named Pat Dugan.  In order to avoid helping in the moving and unpacking process, Courtney begins snooping around her new home and discovers that Pat used to be Stripesy, sidekick to the Star-Spangled Kid back in the 1940s.  (There was a time-travel accident that explains why he’s not in his seventies, but that’s not important right now.)  As she settles into life in Nebraska, the future Stargirl finds herself at odds with her new stepfather, even donning a costume to needle him about being the only adult sidekick to a teenager in history and wearing it to a patriotic themed school dance. The festivities are interrupted by a super-villain, and during the attack, Courtney realizes that she feels much more powerful than usual.  Turns out that, while rifling through Pat’s things, she stole more than a pair of combat boots and a particular mask… Courtney’s accessories include the Cosmic Converter Belt, a device created by the Golden Age Starman to give the late Star-Spangled Kid super-powers.  Pat, for his part, came to keep his stepchild out of trouble with an armored suit of his own invention, codenamed S.T.R.I.P.E.  (If that stands for anything, I can’t figure it out.)  Courtney decided to continue as a superhero, with Pat insisting on serving as chaperone/partner, and the team of Stars and S.T.R.I.P.E. was born!  Being a part of the DCU super-community is a huge mixed bag, though, as the sixteen-year-old Star-Spangled Kid was quickly dragged into some truly unpleasant situations, like when Hell itself attacked the costumed denizens of her world. During that adventure, Star-Spangled Kid was introduced to some of Pat’s old pals in the Justice Society of America, including a man who would have a big impact on her life, Jack “Starman” Knight.  When a mysterious force murdered Wesley Dodds, the Golden Age Sandman, she accompanied Pat to his funeral, during which a supernatural attack caused the mostly-retired JSA members to reassemble. The remaining members of the team came together with a new Mr. Terrific, Dr. Fate, Hawkgirl and the daughter of Black Canary, and after defeating the Dark Lord Mordru, realized that their team was still necessary in the grander scheme of things.  They were not, however, thrilled about the idea of their numbers including a girl barely out of middle school and still wearing braces. Even though she felt more at home with the teen members of Young Justice, she only joined them on a single mission.  It was, however, the mission that assembled nearly every teenage hero in the known world as an army to invade the sovereign nation of Zandia. Her adventures in Blue Valley earned her not only respect, but an archenemy named Shiv (who just happened to be the Mean Girl of Blue Valley High), and she continued to make her presence known to the Justice Society, who slowly accepted her as one of their members.  She even made a few friends there, notably Atom-Smasher, who carried the legacy of Al Pratt, The Atom. In at least one potential future, she fell in love with and married him, though that future has yet to come to fruition.  (They have, however, flirted with one another, as Atom-Smasher is only a little bit older than Courtney, despite his massive height and physique.)  She also found a kinship with new JSA member Captain Marvel, who shared many of her interests despite being much older than her.

Or rather, despite SEEMING much older… The Star-Spangled Kid is the only JSA member who learned the truth about fourteen-year-old Billy Batson, who transforms into Captain Marvel by shouting a magic word in times of trouble.  This, naturally, leads the two young heroes to bond. I’ve tried and tried to find proof that this was either of their first kisses, but given the shifting nature of comics (and the fact that they’ll probably both still be teenagers long after you or I are gone), I’m gonna go with “Yes, it was!”  As The Star-Spangled Kid served with the JSA, her experiences matured her, taking her from a bratty teen to a powerful, brave young woman, earning not only the respect of her peers but of her new stepfather.  When Pat’s son Mike became jealous of how much time he spent with her, Pat even explained that he wanted Courtney to train Mike in becoming the new S.T.R.I.P.E., while the people of Blue Valley accepted her as their one, true hero.  (Take THAT, Kid Flash!) Courtney’s maturation into one of the JSA’s most trustworthy heroes took a strange turn when Klarion The Witch-Boy transformed all the adult heroes into children.  Just to be a jerk, though, he ages the kid and teen heroes into adults, forcing Young Justice to take care of their mentors and leaving a now-adult Starwoman as the sole adult in charge of a squadron of JSA Babies. The change was temporary, but helps to underline how much Courtney has grown as a young woman and a hero.  The next steps in her evolution from Valley Girl to Star-Spangled Kid to Starwoman came in the form of her neglectful, criminal father, Sam Kurtis, who briefly popped up in her life once or twice until she found him working as a minor lackey for the villainous Royal Flush Gang. The visit with her biological father made it clear who her real father was, and she finally chose to accept Pat Dugan as a real part of her family while rejecting her dad’s nihilistic justifications for petty criminal behavior.  Of course, an even bigger change came when Starman discovered that he had a son and chose to retire from super crime-fighting in order to raise that child.  He left his city in the care of Elongated Man, Black Condor and The Shade, left his business behind, and as for his cosmic staff? That, he passed on to Courtney.  Now the bearer of TWO JSA legacies before she ever got her braces off, the former Star-Spangled Kid II realized that a change of nom de guerre was in order. Jack specifically called out her time as babysitter for him and the Junior Society of America, leaving Courtney as the official Stargirl of the JSA.  (Ironically, the name was suggested as her alias by a friend way back in her first appearance.)  Of course, no superhero’s life is without strife, even one that finds herself without S.T.R.I.P.E., as the members of the JSA become aware of the bond between Stargirl and Captain Marvel. It’s too much for young Billy Batson to bear, and the wisdom of Solomon tells him that he can’t expose his secret identity, leading to Stargirl’s first big breakup. It’s a bummer, but one that she has to work through, eventually returning to her crush on Atom-Smasher.  When he allied with Black Adam, Courtney was once again heartbroken, but continued with the JSA, quickly becoming a key part of their team makeup.  (There are many more Atom-Smasher/Stargirl romance moments, but many of them end up being more about him than about her, so suffice to say that it all ends badly.)  So much so, in fact, that when the team splinters, both the older members and the young guard led by Power Girl want her to join their side, with Power Girl taking the time to specifically explain why. Stargirl joins the splinter team, calling itself the JSA All-Stars and serves as a mentor to heroes older than her, such as Cyclone and Citizen Steel.  The Justice Society continue to expand its membership, even reabsorbing the All-Stars before Barry Allen makes his most terrible mistake!  The entirety of the universe is reset thanks to his actions, and the newly formed post-Flashpoint reality initially doesn’t seem to have a Star-Spangled Kid or a Stargirl.  Then, after the Justice League splinters once more, Amanda Waller begins assembling her own League, and knows that she needs one hero in particular to serve as the face of the endeavor. In addition to her sky-high Q Rating, Stargirl’s secret purpose in this new JLA is to serve as a counter-measure for Cyborg should Waller have to send her team against the core League.  When Pandora’s powers begin to corrupt the heroes of the Justice Leagues, Stargirl is one of the only characters who is able to fight off it’s effects, albeit temporarily.  She even escaped from a psychic prison created by the Crime Syndicate for the purposes of defeating her, solely because she refused to give in to fear.  Stargirl’s Justice League dissolved after the Crime Syndicate battle, but a new team, Justice League United, formed in its stead, and Stargirl stayed with that team. The post-Flashpoint reality, however, was not a stable one, a situation that was eventually revealed to be because of the interference of Doctor Manhattan, a being from another universe.  Somehow, parts of the original reality began to bleed through, including a team of heroes from the future and the existence of the Justice Society of America in the 1940s.  When the barriers between realities finally broke, the Justice Society returned and, somehow, Courtney was once again among their number. As of this writing, the ramifications of this change haven’t become fully obvious, but it seems clear that the JSA needs its Stargirl.  As a mainstay in that team, Stargirl shows courage and wisdom far beyond her years, and has been remarkably well-represented in other media for such a new character.  (If you ask me, it’s just nice to see a modern, young hero who isn’t a cynical jerk.)  In just over two decades, Stargirl has appeared on Justice League Unlimited, Smallville, Justice League Action, Batman: The Brave and The Bold and has appeared not once but TWICE in the various continuities of CW’s Arrowverse, with her own show upcoming.  Then again, given that she was created as a tribute to creator Geoff Johns’ late sister, perhaps it’s fitting that she be so quickly embraced by fans of comics, TV and cartoons.