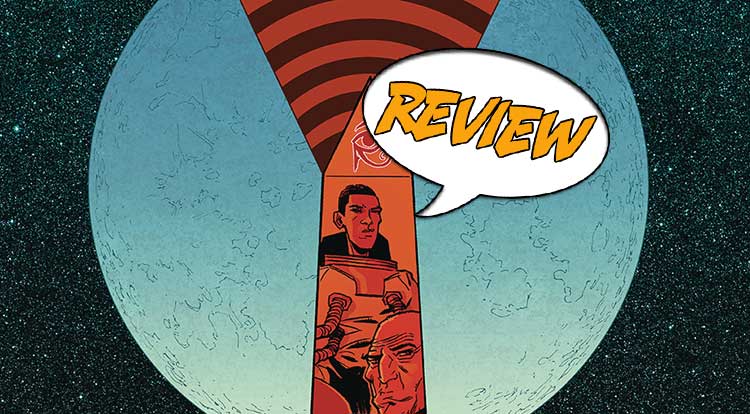 Dr. Hancock has been sent to the moon, and that’s just the beginning of the strange things he’s about to experience.  Your Major Spoilers review of The Osiris Path #1 awaits. Previously in The Osiris Path: An archaeologist is recruited to join a covert, military space program where he and his team must face a black magic cult that will stop at nothing to prevent the crew from deciphering the meaning of The Osiris Path.

The Osiris Path #1 opens up in the mid 80s, with archeologist Dr. Hancock arriving on the moon.  He’s welcomed to the Lunex-Horizon Base, a secret facility on the dark side of the moon that predates the Apollo missions.  After being introduced to a few members of the crew he’s informed that he’s there to eventually retrieve an artifact Mars, but before that, they want to show him something on the moon.  They journey to an archeological site, where Hancock sees something that drops him to his knees: A massive Egyptian temple situated in a crater on the moon.  He examines a few of the statues and hieroglyphs, but before he can really get into it the site is bombed.  Hancock makes it out of the site where he finds members of Lunex-Horizon Base in a firefight with a group they call The Set Group.  Afterwards, Hancock finds himself on The Orion III on his way to Mars.

Not Quite Indiana Jones In Space

The solicitations for The Osiris Path #1 make it very clear that the creators are going for an Indiana Jones feel in this and there are parts that feel like that.  Where it breaks down though is with the main character.  While Indiana Jones is charismatic and a man of action, Hancock is sort of bland.  This is a shame because this plot is fun.  A space romp with ancient Egyptian flair, two warring secret societies on the moon, and promises of a treasure hunt that spans the solar system.  The problem is that so far, the reader’s eyes in this tale belong to a character who is ushered from one scene to another, doesn’t really initiate any of the action, barely asks questions, and who’s own narration offers little more than a listing of facts and recounting of events.

One thing that really stuck out to me with The Osiris Path #1 are the usage of cinematic angles and shot composition.  We rarely see characters straight on, most panels include some sort of usage of foreground and background elements, a tilt, and tricks with perspective.  Also, specifically with the Egyptian temple, there’s care given to establish a scale that really would be awe-inspiring. Also, while the technology is clearly beyond the capabilities of real 80s tech, it still feels like it’s from the 80s by utilizing familiar elements from sci-fi of the period.

Bottom Line: A Fun Premise With Room To Improve

There’s something intrinsically entertaining about a protagonist who wouldn’t be a traditional action hero, being put into an high risk scenario. The Osiris Path has all the elements to have an adventure that fits the Indiana Jones/The Da Vinci Code mould, except a captivating lead character. Of course, there’s always a chance that things will turn around in later issues, but there’s no shaking the feeling that all the more interesting things in this story are happening separated from Dr. Hancock. 3 out of 5 stars.

The Osiris Path #1 is the sort of fun story that will feel familiar to most, but a lack of strong characters drags it down.