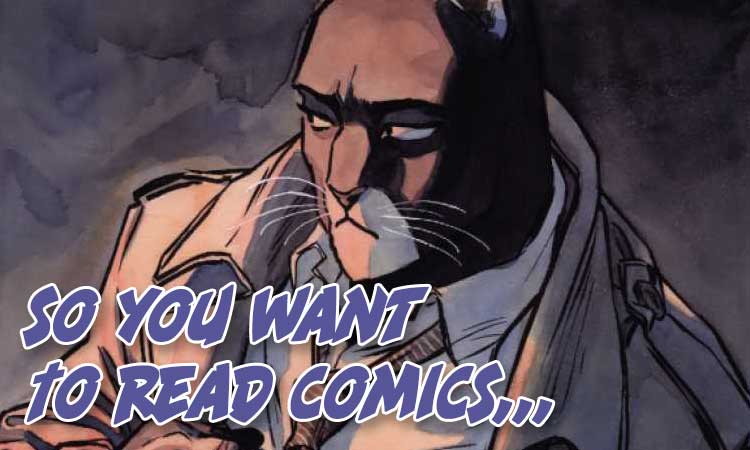 So You Want To Read Comics (Crime Edition)

We all love tales of the dark sides of society. The constant struggle between the criminal underbelly and the broken souls that fight against it, has been the source of an endless stream of stories for us to enjoy. It’s also one of the most easily accessible genres and a perfect path to introduce yourself to the comic book world.

It’s a bit unfair to try and address the whole world of crime stories in just one article. So, I’ve broken things down into a few time periods that I feel have certain characteristics that permeate through most of the stories within that period.

This week, I’m looking at comics that have similarities with crime stories from the 1930s through the 1950s. This is often considered the golden era of film noir and saw such classics as The Third Man and The Big Sleep. It’s also where we see a majority of the books from The Maltese Falcon author, Dashiell Hammett are published. It’s during this period that we see the formation of the hard-boiled detective, the morally grey gangsters, the femme fatales, and the meditations on good and evil that have become commonplace in crime stories. And, if you are a fan of this era, here are two comic book recommendations that I think will satisfy your tastes.

Yes, this is a comic book about a private detective who is also a cat. The world is actually full of humanized animals taking on various roles in society. But, this is no silly story. This is as grim as it can be. The first outing of the titular Blacksad finds him going up against government corruption, unchecked greed, assassins, all in the effort to exact revenge on the murderer of a past lover. From there the series goes on to tackle the darkness of race violence, sexual repression, and The Red Scare. Now, you may ask, “But why are they animals?” and that’s a fair question. See, the animals are utilized in the story as a sort of character shorthand. Police officers are often dogs like German Shepherds, lowly goons are rats, and slimy businessmen are frogs, etc. It gives an amount of depth to the characters that otherwise wouldn’t be possible considering comics generally don’t have pages of text diving into characters like a novel, or personifications created by an actor like in movies. It doesn’t take long though for the fact that these are all animals to wash over you and pull you into the murky depths of this gripping series.

Noir: A Collection of Crime Comics

Okay, so this is a bit of a cheat. This is not a comic series proper, but instead an anthology of short comics. These stories also don’t all take place in the 1930s through the 1950s. But, this collection epitomizes the sort of crime stories from that era. They’re harsh, they’re bleak, they’re violent, and they’re all presented in stark black and white art that will be very familiar to any fan of old film noir. The characters run the gamut, from opportunistic farmhands, to small time crooks with nothing left to lose, to clever reporters in over their head. This collection also can claim to have within it, the work of some of the best comic creators out there like Ed Brubaker, Brian Azzarello, and Jeff Lemire, all of whom have created some amazing crime stories of their own that would also act as wonderful introductions into the comic book world. Quick sidenote: This collection is available, but there is a re-release coming Dec. 2020 that resizes the pages into a larger format.

So there we go, two more recommendations in the book. Do these tickle your criminal fancy? Do you have some suggestions of your own? Let us know in comment section below.