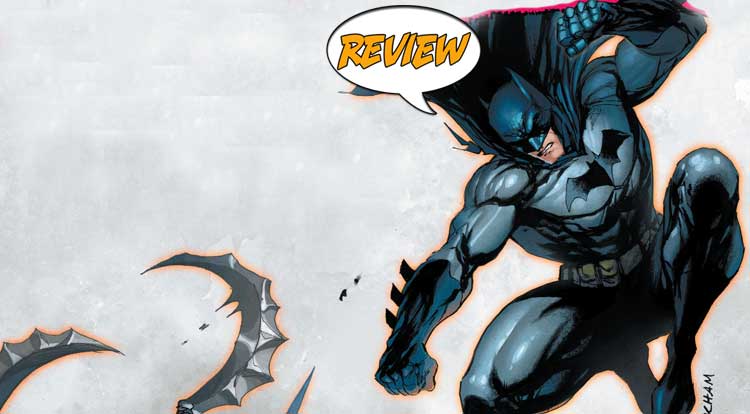 Batman and the Outsiders #12 Review

They say Batman has a plan for everything…  Not this time.  Your Major Spoilers review of Batman and the Outsiders #12 from DC Comics awaits! Previously in Batman and the Outsiders:  Batman goes over the edge!  With everything that’s happened in Gotham City and Ra’s al Ghul’s personal attacks on the Dark Knight and his team of Outsiders, Batman lashes out and uses his all his anger and skills to take down Ra’s and his new League of Assassins on his own.  Will the Outsiders be able to pull him back from his rage-or will they find themselves on the receiving end of it?

THE ARTIST FORMERLY KNOWN AS BABYLON

We open with Batman addressing his agents, alongside Lady Shiva (who may or may not actually be an Outsider, it’s unclear) and congratulating them for their good work in Cambodia last issue.  They still have the problem of Ra’s Al Ghul to deal with, but there’s hope, as they’ve taken on another new ally: Sofia Ramos, previously Ra’s’ agent called Babylon.  She’s looking for a new alias and rocking a new green-and-white ensemble that fits well with the team’s general color palette.  Immediately after the meeting, Batman and Black LIghtning have a heart-to-heart where Batman admits that he doesn’t have everything under control, while Lightning offers to help teach not only the other members to evolve, but offers to help Batman himself.  Shiva and the Orphan have a mother/daughter talk that involves punching, Katana tells Black LIghtning that she knows he’s in love with here, and Cass offers to help Duke Thomas with his new powers.  The team sets out to find Ra’s, only to have him contact them: He’s aware that Shiva has turned on him, and in return, he’s going to her small village hometown…

THE VENGEANCE OF RA’S AL GHUL

Strangely, the cover promises an angry crusading Batman fight that doesn’t actually appear in these pages, which is a shame to me.  There’s a lot of uncertainty among these superhumans, and I’m totally here for it, and I really enjoy the idea that this version of Batman isn’t always perfectly assured and prepared for every ocurrence.  It’s nice to see Black Lightning treated as a peer of the big bad Bat, and the new kids are fun, even if the darkness of being and Outsider slowly crushes them all.  The final page of the issue is a laughing Ra’s Al Ghul taunting his foes, and I have to say…  It’s just WRONG.  There’s something inhuman and disturbing about the proportions of his head, the shape of his teeth and the look in his eyes.  It’s not the only part of the issue that veers into that uncanny valley, either, making what might have been a sweet heart-to-heart between Katana and Black LIghtning into a strange dance between two awkward figures whose faces are never quite human, and it’s a shame.  There are some strong visuals to be had as Sofia punches down a wall, and the earthquake that destroys Shiva’s former home town is well-rendered, which makes the artistic missteps even more distressing.

BOTTOM LINE: NEVER QUITE GELS FOR ME

With the problems of the art and a general sense of “in-between” permeating the story, Batman and the Outsiders #12 is a real mixed bag of an issue, with a lot of strong character moments in a story that is weirdly paced and art that vacillates from “Pretty Okay” to “Just No”, making for a right-down the middle 2.5 out of 5 stars overall.  It’s a great cast and these creators have a lot of strong ideas in play, including a really good take on Batman that I enjoy, soI’m hoping that some of the rough edges will get worked out as the book continues.

There are some lovely character moments and interactions to be had here, but Soy's art occasionally gets grotesque in unpleasant ways. It's nice to see a Batman with doubts, though.
Batman Batman And The Outsiders dc comics Review The Outsiders
Share. Twitter Facebook Pinterest LinkedIn Tumblr Email
Previous ArticleVIZ Media announces Yashahime: Princess Half-Demon
Next Article [Preview] Batman: Gotham Nights #4