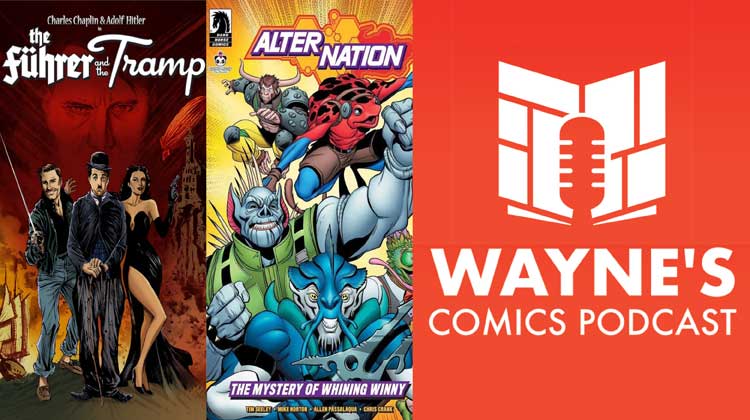 It’s another great doubleheader this week in Episode 433! We start things off with a great conversation with Sean McArdle from the excellent comic The Furher and the Tramp from Source Point Press. The first issue has been released, with more to come!

Here’s the book’s description: “Charlie Chaplin – comic, filmmaker, and raconteur didn’t become the world’s biggest star by courting controversy, but when he comes face-to-face with the horrors of Hitler, he feels compelled to get off the sidelines and get involved. And then Charlie is approached by FDR himself with a special assignment. His mission, if he chooses to accept it: create a propaganda film to drum up public support for joining the war in Europe!” We talk about the series, which I highly recommend, including the characters, the surprises, and what Sean has in store for us in the months ahead! Be sure to let your LCS know you want this title!

Then everything concludes with my fun conversation with Ryan Magnon and Curtis Andersen from Alter Nation and Panda Mony!  Comics and toys have long worked together to tickle the imaginations of children of all ages, so we talk about their creative franchise Alter Nation. Here’s how the comic is described: “Off the coast of California, at a secluded naval base on San Nicolas Island, a special forces team was created in a top secret government experiment. It’s objective: create the perfect soldier by blending human and animal genetic abilities.” We talk about the comics included with each action figure as well as the Dark Horse book written by Tim Seeley, then look ahead to what we can expect from these high-power creators in the months ahead. Your LCS can order these books and toys, so let them know you want them! Be sure to check out the website listed above for videos and much more! Special thanks to Jeremy Bonds for making this interview happen!