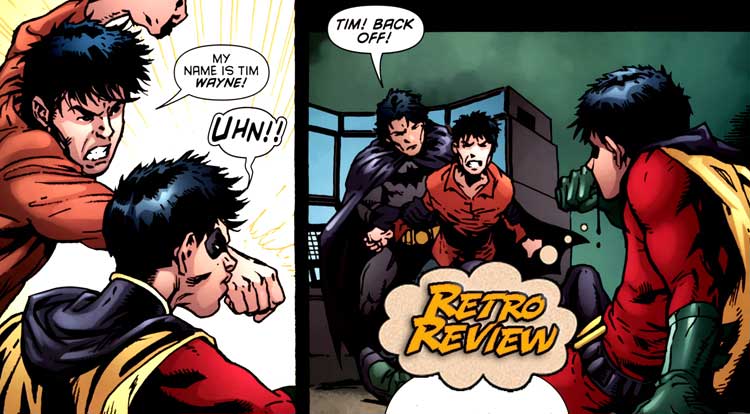 What do you do when your boss replaces you?  If you’re Tim Wayne, you move to Europe and put on a cowl.  Your Major Spoilers (Retro) Review of Red Robin #1 awaits! Previously in Red Robin: During the Final Crisis, Batman was killed by Darkseid, leaving Gotham City without it’s protector.  Nightwing returned from Bludhaven to take up the mantle of the Bat, and when he chose his Robin, he went with Damian Wayne, the son of his fallen mentor and adoptive dad.  Naturally, this was a bit of a problem for the then-current Robin, Tim Wayne, nee Drake, who not only took the whole situation badly, but refused to believe that their Daddy-Bat was actually dead.  It led to a schism within the Bat-family, and Tim giving up the role of Robin to take on another mask, that of Red Robin.  (The fact that Red Robin was initially seen in an alternate future, worn by a grown-up Nightwing just makes your head hurt, so I wouldn’t dwell on it too much.) This issue opens with a big action setpiece, as Red Robin tracks a kidnapped girl through the streets of Madrid, following a trail that the policia couldn’t.  As the criminals think they’re getting away, Tim busts in (looking, by the way, all the world like Batman himself) and takes down the gang and their pet cyborg, leaving them all in a burning building as he saves the innocent young girl.  It’s a very Batman sequence, followed by Tim angrily cleaning his burn wounds and wondering how he got here… and what he’s doing here.  Cue the flashback to his last moments in the Batcave. Even as the new Batman insists that he doesn’t need Tim as a sidekick because Tim is actually his peer and his equal, young master Drake-Wayne can’t get past his own pain (and, honestly, since being part of Batman’s life has cost him both parents, a girlfriend, nearly everything he ever knew and finally, Batman himself), which is why he moved to Europe.  Once there, he can’t seem to avoid thugs with automatic weapons. Tim is 100% certain that things are not what they seem with Batman’s seeming demise, and chose his new identity (which was used in this universe by a murderous Jason Todd, making the whole thing even more confusing about which Robin is the Red one) to keep his actions from causing static for the rest of the Bats.  And honestly, this issue sets him up as more like Batman than the actual current Batman. It is, however, and incredibly dark issue, which makes some of the action sequences feel a little less exciting than they should have been.  I also appreciate the way Ramon Bachs makes this Red Robin uniform look better than anyone since its creator drew it, back in the pages of ‘Kingdom Come.’  As he broods throughout Paris, one thought echoes through Red Robin’s head: “He’s alive.” Of course, for every friend who thinks he’s gone made with grief, there’s a villain who wants his head on a stick, and this particular coterie has been sent by one of the worst: Ra’s Al Ghul!  All in all, Red Robin #1 gets a lot of things totally right, relaunching the modern Robin under his own cowl, separating him from the rest of Gotham’s creators both physically and mentally, and sets him up to be an impressive hero all his own, with solid art that has to fight against murky coloring but still gets the job done, earning 3.5 out of 5 stars overall.  This issue has a lot of potential, and the only thing sadder than than knowing it will be wasted is knowing that the book is more than a decade old.

It's a nice relaunch for a character who gets very little respect (then or now), setting him up to be the bad boy of the Bats, with some really strong art marred by a REALLY dark coloring job.