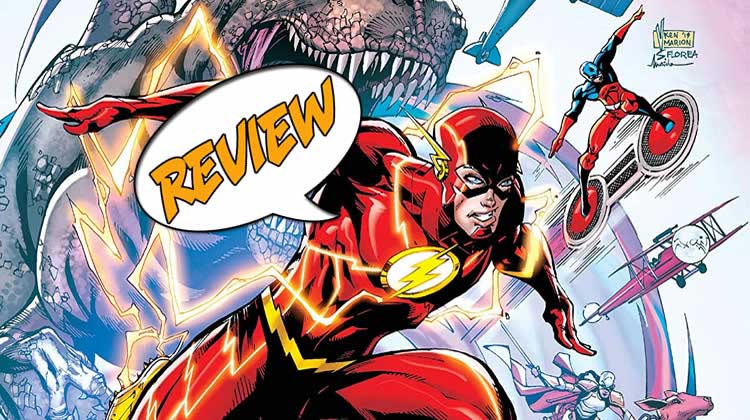 Flash: Fastest Man Alive is a digital mini-series from DC Comics that’s been helping fill the gap while the local shops are down. It’s an entertaining romp featuring science, super-speed, and a rookie hero there to help the Flash make it out alive!

SOLICITATION: Temporal travesties are wreaking havoc on the streets of Central City, and the Flash needs an extra pair of hands to keep the city safe—he just didn’t realize how tiny those hands would be!

WHAT IS IT WITH THE FLASH AND MESSED-UP TIMELINES?

The Fastest Man Alive is so fast that he keeps screwing up timelines! Now, that’s fast!

This digital-first mini-series harkens back to recent Flash stories such as “Flashpoint” and the CW’s Flash TV show. In those two tales (as well as others), Barry Allen uses his speed to make changes in time that he would prefer. It never fails that those attempts turn out to be big mistakes, full of unexpected consequences!

The same is true in this book, with Flash encountering a dinosaur, among other things, on the streets of Central City. Fortunately for him, he also encounters a “new” superhero who has skills that just might help him survive all this! Since the cover already reveals who it is, I feel it’s okay to let everyone know it’s the Atom—well, the Ryan Choi version, anyway!

Something you should know about this “comic” is that this seems to be taking place in the aforementioned CW-like Arrowverse, with Iris being a more diverse character, for instance. Also, DC has yet to figure out what to do with Mr. Choi, so he’s brand new to the costume here.

I have always enjoyed Gail Simone’s writing, be it on Batgirl, Wonder Woman, or other heroes and heroines. She clearly enjoys the interactions among the characters as well as putting Flash through his paces, pun intended.

In fact, some of the most fun in this book is Ryan and Barry “geeking out” over various science happenings. Those of us who have geek friendships will seriously relate to how they react to what’s going on around them. I particularly enjoyed their “science pals fist bumps!” Very nicely done!

At one point, Flash and Atom have to take down various time travelers, which is enjoyable to watch, their quips and all.

Appropriately enough, the “bad” guy here is Chronos, a long-time (sorry!) DC villain known for time meddling. Turns out, though, he’s not the problem, of course. It’s Barry, and the Reverse-Flash is involved as well.

The dialogue is fun and witty, and things move at a rapid clip (of course!), although this story doesn’t end in this chapter. You have to keep going if you want to find out what happens next!

My favorite art in Flash stories has a more frenetic feel to it—you know, something a little less stable, a little more sketchy to give us the sense of speed happening here. The art here is great along those lines, with good facial expressions and fascinating action sequences.

The only quibble I had with it comes in the coloring of the Atom’s costume. I know that his uniforms have changed now and again in the comics, but Ryan’s obviously wearing Ray Palmer’s old duds. Sadly, in a few panels, his leggings change from red to blue, which confused me for a bit. Oh, well… if that’s the only concern I had, it’s not too bad!

I appreciate that DC is still putting out new content even though nearly all of the rest of the industry is only putting out a portion of what it normally would, with things likely to gear up again on the 20th of May. This Flash book (along with the other DC digital releases) has made it a lot less painful time for an experienced comics reader like me! Thanks, DC!

One of the good things about digital comics is that they don’t have to follow a monthly schedule. Based on previous issues, the next chapter is likely to be released soon—next Friday, in fact, on May 15. Looking forward to it!

Yes, time travel messings are becoming something of a cliché for the Flash, but from what I see described in the next installment, it’s going to take an interesting turn. Still, the action was fun in this chapter! If only Barry had made time move faster in real life, we could be reading the next pages already!