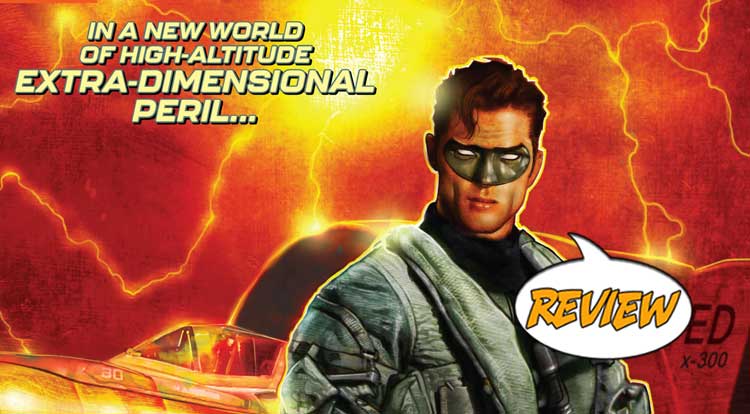 Lost without his ring, Hal Jordan has to save his fellow pilots from a terrible fate!  Your Major Spoilers review of The Green Lantern: Season Two #3 from DC Comics awaits!

This issue begins with a strange storm appearing over the small California town of Alto Linda, a conflagration that comes with puzzling disappearances: Three of Hal Jordan’s fighter pilot pals never came back, including his former love interest, Jillian “Cowgirl” Pearlman.  Hal agrees to help figure out what happened to thim, and is shown the ship they were testing, the X-300 Teleport Plane.  Leaving his ring behind (as is his custom when flying, thanks to his refusal to accept any safety nets in his life), Hal takes the backup X-300 up and teleports himself out of reality.  Fortunately, whatever effects sent the first X-300 down work for him as well, as he quickly finds Cowgirl but loses his ride, thanks to an alien storm-creature.  Hal wonders why the creature is angry, only for Cowgirl to point out that is sounds sad, and that it’s cries sound remarkably like a name.  With his jet destroyed, Hal worries that there’s no way out of their strange dilemma, until Cowgirl shows him that SHE landed her ship without any damage.  Teleporting back to reality, Hal arrives just in time to find the United States military ready to attack the creature causing storms over the mountain…

PROPS FOR THE TENACIOUS D REFERENCE

I like aa lot of the things in this issue, but what I like most of all is Green Lantern’s realization that the creature stuck on Earth is a pet of the one from the other dimension, a revelation that has to be at least partially drawn from his own alien pets.  (They’re adorable little cat/bird of prey hybrids, and they actually save his bacon once he’s back on Earth.)  The script makes it clear that the part about Green Lanterns being space police is more literally true than ever, as he forcibly stops the Air Force from attacking Ummiu, the alen puppy, threatening to arrest everyone under the authority of the Guardians of the Universe.  (In an amusing bit, he lets the creature go with a stern warning that Earth isn’t “a nice neighborhood” and that it will want to keep it’s pets home for their own safety.)  It’s a clever story all around.  And then, there’s the matter of the art…  Sharp is doing something new here, fully painted work with clear influences from Richard Corben and classic ‘Heavy Metal’ and it’s multi-layered and really interesting.  It’s also very dark and a bit hard to follow in a panel-to-panel narrative and really doesn’t work for me in this traditional comic book format.  It is in no way bad, but it makes the story a little less clear than I would like.

In short, The Green Lantern: Season Two #3 continues the gleeful experimentation with format, characters and the vast continuity of Green Lantern that has ben a hallmark of this entire series, including the Blackstars miniseries and the previous volume of The Green Lantern, and delivers a coherent, exciting and interesting story in single-issue format, earning 3.5 out of 5 stars overall.  I really like the idea of Hal stationed on Earth, I am intrigued by the latest hints of what’s going on with the United Planets Superforce, and I’m looking forward to more of Sharp and Morrison’s take on the Emerald Gladiator.