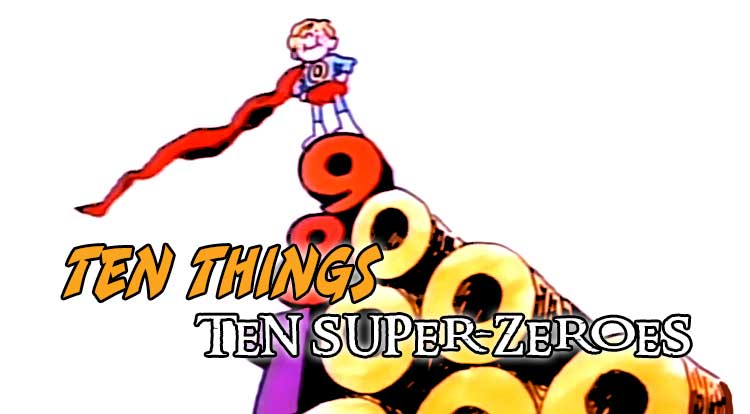 Call it naught, call it nil, you can even call it zilch, but don’t forget to call when you’re in mortal danger!  Welcome to Ten Things: Ten Super-Zeroes!

Whooshman-Bicarbonate Films, in conjunction with An Amateur Comics Historian and The Foundation of Modern Mathematics, Presents: Headliner of the THIRTIETH season of insect-themed heroes, Aruto HIden is the CEO of a powerful technology company, thanks to an inheritance from his grandfather.  Though he would prefer to be a stand-up comedian, Aruto is forced to use the Zero-One driver to fight off an uprising of anroids called Humagears. His powers include the usual armor for kicking, as well as a built-in supercomputer to enhance his mind and make him able to recognize changes in the timeline.  Aruto has an alternate form, Kamen Rider ZeroZero-One, created after his powers were stolen, and is the first Kamen Rider of the new Reiwa era, designated by the ascension of Emperor Naruhito to the Japanese throne. Born in a horrifying fascist microverse, Amity Hunter was recruited to a would-be team of Young Avengers assembled for questionable reasons.  An open and avowed racist, Big Zero is also a sadistic monster, which led to her ejection from the team, upon which she was a founding member of a new, young Masters of Evil.  Among her more horrifying moments was her continual reprogramming of her computerized teammate Egghead to be her personal sex toy, as well as adjusting his mind to share her neo-N*zi views. A member of Japan’s premier super-team, Big Science Action, Miss Kusanagi (first name unrevealed) created her own armor and served as one of the team’s founding members.  By the time of Final Crisis, she was an elderly woman, but still routinely upgraded and updated her battle suit to better protect her home from threats large and… well, even larger.  Big Science Action tended to face extinction-level threats, but were eventually co-opted by Mister Mind and had a rather confusing ending.  It was a Grant Morrison story, so it’s probably better to just press on. A native of planet Venus whose real name is unrecorded, The Sub-Zero Man (aka Sub-Zero to his friends, not to be confused with that ninja guy) was actually frozen by flying through the tail ofa comet before crashing on Earth.  After exposure to the cosmic forces of the comet, he could freeze anything with a touch.  Eventually, he acquired a sidekick, an Inuit boy named Freezum who joins him in the field.  He also occasionally teamed up with fellow Novelty Press hero Blue Bolt and was part of the massive army of revived Golden Age heroes in Project Superpowers. The son of legendary hero Ultraseven (the second of the Ultramen, who eventually returned to The Land of Light after being seriously injured), Zero is fearless and strong-willed and a little bit stubborn.  In his first appearance, Zero had to contend with Ultraman Belial, a turncoat member of his people, before popping up throughout other Ultraman adventures in various roles.  As is the way of Ultramen, later heroes Ultraman Orb, Ultraman X, Ultraman Geed and Ultraman Ginga Victory were trained/empowered by Zero. Injured in the line of duty as a Marine, Stuart Trautmann was at ground zero of an extra-terrestrial crash site and was bonded with an alien creature/battle suit.  Now locked in a symbiotic relationship, Soldier Zero fights not only human criminals but enemies from a interstellar war that he knows nothing about.  A creation of Stan Lee, Soldier Zero was part of a new shared universe from BOOM! Studios circa 2010 or so, each of which ran 12 issues before ending. Created by genius inventor Doctor Zero, the Zeroids (Zintar, Zerak and Zobor, who are later joined by a new leader, Zogg) were allies of Captain Action in his battle against the Shadow Raiders and their army of undead warriors.  In truth, the Zeroids were a series of robots with special motorized parts created in the late sixties, each of whom had their own gimmick.  They were relaunched in the wake of ‘Star Wars’ as The Star Team, including another new kid with a dome head that kind of resembled R2-D2.  Another Zeroid, named Zemo, was available only in Europe, kit-bashed from parts of all three core Zeroids. In the grand tradition of superhumans whose given name is referential to their powers, Ryan Frost was a mere janitor when he was caught the explosion of a cryogenic freezing system.  With the help of the United States goverment (and genius hero Dr. Meredith “Tachyon” Stinson), he was gifted with an armored super-suit that protects him from his own powers to absorb heat/generate cold/blah blah blah psudo-science ice junk.  Like all ‘Sentinels of the Multiverse’ characters, he has multiple universal iterations, including at least one evil self, but I’m most entertained by the fact that he initially begins superheroing in order to pay off his protective armor. A giant robot created by Professor Max Archer, his programming seems pretty old-school, and he is one of the last lines of defense for his team (whose name is the subject of some debate in their first apperances.)  Obviously a tribute to the Ultraman series, he has more than a little bit in common wit today’s #6 entrant, but his rocket fists are more reminiscent of Daikū Maryū Gaiking and his costume resembles one of Star-Lord’s old looks.  Regardless, I love his codename as if it were my own child. Cryonically-presered super-baddie Victor Fries is certainly better known by his second alias, Mr. Freeze, but originally went by this alias.  First appearing in 1959, Fries launched a successful crime spree across Gotham City, targeting diamonds (or “ice”, as they are called by the thugs, mugs and pugs of Gotham), and was brought down by the Caped Crusader and Robin.  He then disappeared for nearly a decade before relaunching his icy crime cartel.  In reality, his return in the comics was presaged by the Batman TV show, which relaunched and renamed him before DC revived him in comics.  Add in the heart-rending retelling of his origin in ‘Batman: The Animated Series’ and you’ve got a character who is more defined by his live-action appearances than the actual comics themselves.

This week’s topic, Ten Super-Zeroes, is all me, but feel free to follow along @MightyKingCobra and suggest your own.  You can also get more Ten Things madness on Twitter or check out the full Twitter archive here! As with any set of like items, these aren’t meant to be hard and fast or absolutely complete, if only because even nothin’ from nothin’ gotta have something, ’cause a minus is just too low to see.  Or, at least, so Billy Preston would have us believe.  Either way, the comments section is Below for just such an emergency, but, as always: Please, no wagering!