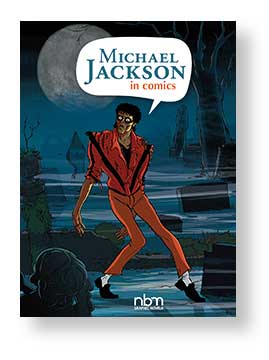 NBM Publishing has updated its schedule of graphic novels that are being released through the end of 2020. LEONARDO DA VINCI: THE RENAISSANCE OF THE WORLD
By Marwan Kahil, Ariel Vittori

One of the greatest artists of all time, as well as a genius inventor, Da Vinci was arrestingly tall and handsome. This comics bio shows the process of his work and his inventions, his persecution as a gay man and how the changing politics of his country and ebbs and flows of those in power affected him and his career.

A turbulent story on an exceptional man.

Complemented with back matter on his chronology, list of his oeuvres, etc… Here is a set of 3 tomes on great rock and roll bands! The bestselling comics bios of the Beatles, the Rolling Stones and Bob Marley are collected into one attractively priced banded set. Normally separately $85, $74.99 as a set. Country music icon Willie Nelson is recognized all over the world for his music, philanthropy, and unmistakable look. Since he was a child in Hill County, Texas, he has been writing and performing for adoring crowds. Though his mainstream success did not come until later in his life, he has been determined to take his unique sound and voice to the people even before he was a household name.

There have been tragedies, missteps, IRS troubles, good times and bad along the way, but Willie continues to shine his positive outlook and project his humble voice out into the world. In this graphic novel biography, all the chapters represent a different era of his life and struggles – each illustrated by a unique indie comics talent. Planet Earth, engaged in an intergalactic conflict, owes its salvation to the clone of Leonardo da Vinci and to the rebirth of his genius. Author Stéphane Levallois has created the fantastic universes of many of the big Hollywood blockbusters (Alien, King Kong:Skull Island, Harry Potter and many others).

The result of two years of elaboration and work, this space opera exemplifies his talent in two areas that he masters to perfection: the universe of science fiction and art. To build his story and compose his boards, Levallois draws from the painted and drawn work of the Renaissance master, selecting a large number of drawings and paintings by Leonardo to represent the characters, vessels or even the architectures in his story.

The grand scale result is stupefying as Leonardo’s everlasting visions are successfully projected into a stunning futuristic setting. A visual experience not to be missed, in a large format hardcover. THE DISNEY BROS.: THE FABULOUS STORY OF WALT AND ROY
By Alex Nikolavitch & Felix Ruiz

After the bankruptcy of his first two companies, the young Walt Disney decides to call on his older brother Roy to start a new business: the Disney Brothers Cartoon Studios. The combination of their opposing talents, one artistic, the other managerial, will give birth to an entertainment giant despite the difficult nature of Walt.

Little by little, Walt will push his brother into the shadows and sink into chronic depression and excessive consumption of alcohol … But all this will not prevent him from producing the greatest masterpieces of animation.

The authors have chosen a cartoon style, worthy of Mickey Mouse comics, to tell a very serious story of creation, money and politics, but also… of family. 2051. The world’s largest company, The Company, has seized power on a planetary scale and runs the world as if it were a business.

In a plutocracy, the richer one is, the more powerful one is. The elections have been replaced by general shareholders’ meetings where the votes are linked to the number of shares owned by citizens. Government is made up of those who own the most shares and it is the laws of the market that govern everything, creating a strange political system. In this context, an anonymous citizen becomes compelled to uncover how the world came to this situation, without paying any attention to the official version.

Without knowing very well why, several members of the government end up encouraging him to carry out this investigation which apparently goes against their interests, by giving him access to all the information.

From then on, he decides to pursue two objectives: to discover the true history of The Company and to try to understand what are the various interests that are trying to influence his investigation. The truth behind this power and uncovering it can be frightening but he is determined and has little to lose.

At a time when it seems more and more natural that wealthy people such as Silvio Berlusconi or Donald Trump come to political power, this graphic novel envisions the possibility that, in the near future, the world will be governed by a plutocratic system in which it will go without saying that politics and wealth go hand in hand. MICHAEL JACKSON IN COMICS
By Ceka and various artists

Well beyond his passing in 2009, Michael Jackson remains one of the most adulated and mysterious stars in the world. Incredible singer, brilliant musician, amazing performer, he was just as talented as he was eccentric, adored as well as reviled with sordid accusations, sadly caught between a stolen childhood and a suffocating star system.

Discover in this biography mixing comics and documentary chapters, how the youngest of the Jackson 5 was propelled to the front of the stage and then onto one of the most extraordinary solo careers in music.

The next volume in the sellout series featuring the Beatles, the Rolling Stones and Bob Marley.