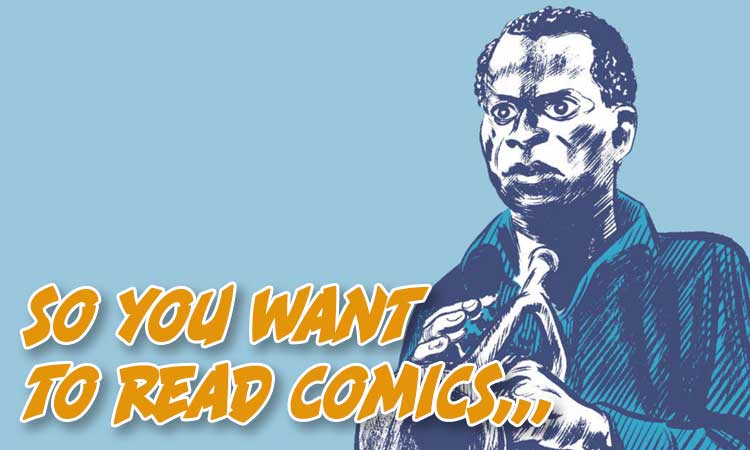 So You Want to Read Comics (Music Edition)

There are few things as universally enjoyed as music. Well, maybe food. But, like food, music is something that is varied, personal, cultural, religious, and spawns conversation about its merits and flaws. Music as a concept also is the subject of many different types of creations, comics included (there’s comics about food too, but that’s an article for another day).

When deciding on these recommendations I wanted to spotlight comics that embodied elements of music that exist separate from specific musicians. To be clear, there’s no shortage of biographical comics about musicians and bands and I wouldn’t discourage a new comic reader from seeking these out.

The Wicked + The Divine

The Wicked + The Divine is a comic series about a group of twelve people who are reincarnated gods who will die in two years.  Naturally, they become rock stars. Eventually the series expands to address many different things, but at the beginning, it has a lot to say about the nature of the relationship between a musician and their fans. There’s a back and forth between the lengths a fan will go to to prove their adoration and how these gods spend their limited time to garner that adoration. The early volumes of this series really feel like meditations on fame and how disposable “stars” are to the public.  And while at its core there are a lot of mythological elements to this story, everything is framed by music and the music industry: There’s magic spells being cast via a lightshow at a pop concert, ancient grudges play out at underground shows in subways, even skepticism of the divine is present in the form of a music journalist.  At the end of the day The Wicked + The Divine will make you think about your own relationship with the music you love and the people who create it.

Now, this may seem like I’m breaking my own rules I established earlier, but hear me out. Total Jazz is a collection of single page comics that were once featured in a magazine called Jazzman. On their own each comic is interesting but are so brief that they are best looked at as glimpses of an idea. What makes this special is the collection. Each comic moves into another and before you know it you’ve plowed through five of them and then it dawns on you that there was a common theme.  Then, one of these snippets hits and it doesn’t look like or read like any other in the collection.  It’s then capped by a tale that somehow manages to absorb all the different elements within and creates something coherent.  It’s at this point that you realize that you’ve been reading a jazz composition.  There’s solos and experiments, it’s raw at times, and refined at others, it sometimes feels personal, sometimes accusatory, there’s celebrations and moments of grief. Rarely do you see a comic that takes a subject and rather than just speak on it, utilizes it’s format to exemplify the subject.

So, what do you think? Are your lighters out for these recommendations? Or are you skipping these tracks?  Let us know in the comments, and as always leave your own suggestions.