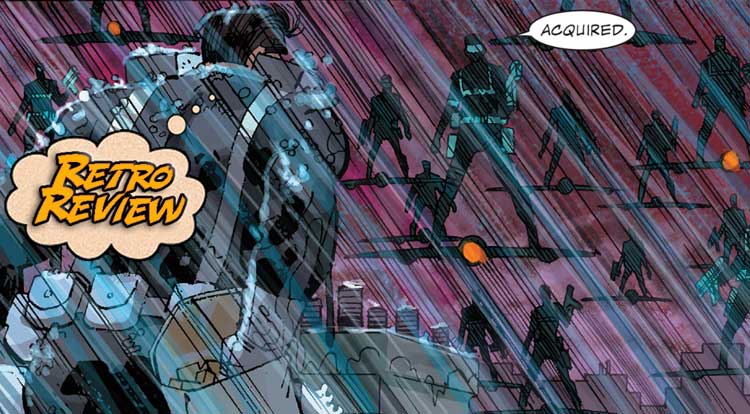 The Punisher’s war journal is about to get its final entry…  Your Major Spoilers (Retro) Review of Dark Reign: The List – Punisher #1 awaits! Previously in Dark Reign: The List:  After the events of Secret Invasion, Norman Osborn was left in command of the United States superhuman response force, which he renamed H.A.M.M.E.R.  For nearly a year, Osborn used his position to engage in unprecedented corruption, targeting superheroes who didn’t follow his crypto-fascist nonsense, but during all that time, Frank Castle has turned from a war on crime to a war on Osborn.  In order to bring down The Punisher, Osborn allied with The Hood and his criminal army, but failed in defeating the skull-headed vigilante. Thanks to a helpful dose of stolen Pym Particles, Frank evades the total overkill of Norman’s first attack (which, it should be noted, took out an entire pier and a number of buildings which we have to assume were empty, per Marvel rules.)  In failur, though, he responds with… more overkill, sending in his personal Wolverine and a cadre of armed H.A.M.M.E.R. troops on flying goblin-gliders.  In a really nice moment, Frank adheres to his principles, treating the attack of what are, essentially, law-abiding police officers with entirely non-lethal solutions. Romita’s art really makes this whole sequence sing for me, even making me understand the appeal of The Punisher as a character, as Frank fights an overwhelming attacking force while badly injured, fleeing into the sewers to escape detection and/or death.  “Crisis is just another word for opportunity,” he thinks to himself, before turning a corner to find his problem is much bigger than he expected. Sharp-eyed readers will note the sleeve tattoos that indicate this Wolverine isn’t James “Logan” Howlett, but his abandoned son Akihiro, also known by the offensive nickname “Daken,” the japanese word for mongrel or cur.  Still, even as a third-rate Wolverine, he’s a goof four steps above Punisher in the power category, and even though frank can’t “see the appeal” of claws (which is a GREAT line, by the way), they’re still dangerous as hell.  Akihiro quickly closes the distance between them to negate the advantage of Frank’s high-caliber “super-powers”, but finds that, powers or no powers, Frank Castle has tricks up his skull-covered sleeve. There’s a real feeling of respect between the two combatants, with Wolverine even warning Frank not to go back to the surface and face a summary execution, instead promising to “end him right” in the sewer, giving him a one-on-one death with whatever twisted sense of honor drives such a man.  The Punisher sets off a grenade in his face as response, climbing away to a rooftop prepared to be blown to smithereens, only to have the regenerating mutant catch up quickly.  An angry Akihiro starts out on a villain speech, only to be cut short by The Punisher with a terse “Gonna keep gummin’ all night, boy, or you wanna get to the work?”

They prove to be his last words. I remember reading this issue when it came out and being stunned to silence by that final moment, gory and yet somehow subdued for a vicious beheading.  As a large swath of the city burns, Norman Osborn turns his helicarriers and heads back to base, happy that The Punisher is finally out of his hair, while Wolverine throws the rest of his severed corpse down to join his head in a filthy alley,  Dark Reign: The List – Punisher #1 is one of those comic books that succeeds by pretending that endings are final in comics, but even so, it provides one of the better horrific endings I’ve seen, with solid art and a story that balances nonsense with gritty streetwise nonsense well, earning 3.5 out of 5 stars overall.  The story that follows sort of stretches the credulity of the whole “non-powered street level vigilante” aspect of Punisher, but this story bought Remender and company a lot of leeway from me.

What might have been a forgettable one-shot turns into something entirely different,. thanks to a shocking ending and some truly impressive art by JR Jr.