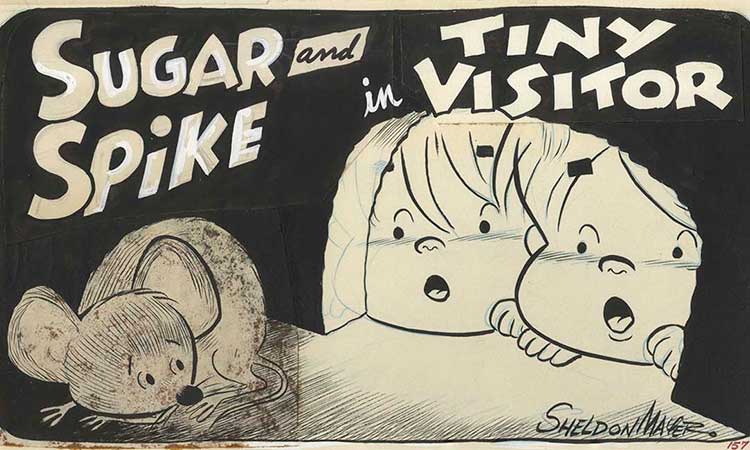 The Sheldon Mayer Estate to auction Sugar and Spike originals

One of the most influential cartoonists of the Golden Age of Comics, Sheldon Mayer delighted his readers with the adventures of his characters Sugar and Spike, Scribbly the Boy Cartoonist, and The Three Mouseketeers, along with his popular artwork of Rudolph the Red-Nosed Reindeer, throughout the years. He’s also the man credited with discovering Superman, so impressed was he with the strip (which had been rejected over a dozen times) that he convinced Max Gaines to take it up the food chain for the first issue of Action Comics. Later, as an editor at DC Comics, Mayer was responsible for bringing in Wonder Woman, Green Lantern and scores of other titles into the fold.

For the first time, Sheldon Mayer’s personal collection of his artwork, sketches, and journal are offered, with complete issues of Sugar and Spike, along with Scribbly (which was reprinted in The Greatest Golden Age Stories Ever Told). His journal and sketchbook from 1935-37 is even included, with stories about the early days of the comic book industry. Additional information on the Sheldon Mayer collection can be found at https://natedsanders.com/catalog.aspx?searchby=3&searchvalue=sheldon+mayer