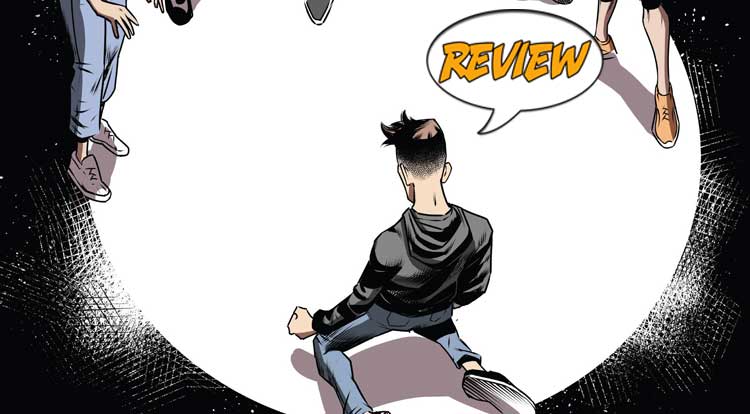 What would you do if your girlfriend was a demon?  Luke is about to find out, the hard way.  Your Major Spoilers review of Lucifer’s Knight #2 from Action Lab -Danger Zone awaits! Previously in Lucifer’s Knight:  After finding out his friend’s secrets Luke storms off in a fit of anger and betrayal. Derek follows to try and explain himself and the others, but the two are attacked by another soul eater.

This issue picks up immediately after last, as Luke is stunned to find that his girlfriend of TWO YEARS is actually a demon, and when she exposes her bat-wings to prove it, he’s equal parts terrified and offended.  The rest of the group reveals their secrets, one by one (one’s a witch, one’s an angel, one has an arsenal of magic weapons and C.J. has the biggest secret of all), leading him to stomp off into the night, angry that his peer group has been lying to him all this time.  Derek, the only other guy in their group, follows him to explain the truth, calming Luke down a little bit…  right before they’re attacked.  Strangely, it’s Luke who realizes that they’re dealing with a disguised emmisary of evil, but Derek quickly blows it to bits and walks him home as they very pointedly DON’T talk about all the madness that just happened.  Luke dramatically throws himself into bed as, in the distance, a strange firebird lights up the sky in the distance, making it clear that something is headed this way.

We clearly don’t know everything we need to know about Luke, which helps to clear up one of my biggest complaints about issue #1: There just wasn’t enough “there”, there.  This issue’s explanations deepen the mystery in interesting ways, though I find them to be a little bit abrupt and awkward (which may be intentional, as we’re dealing with teenagers.)  Finding out that your girlfriend is the literal daughter of the literal devil would be off-putting, but I’m not sure why Luke immediately goes home into emo mode (which, again, may be because teenager.)  Artwise, I feel like there’s improvemtn from issue #1, with the soft-focus inking getting more definition and increased range of expression from the main characters of the story.  The page where C.J. dramatically shows off what makes her special is well-designed, probably the best single panel of the series to date, showing off what Utrera is really capable of.

BOTTOM LINE: BETTER THAN #1, STILL PLAYING A BIT TOO COY

I had multiple complaints about story-telling and pacing after reading the first issue, and I’m happy to report that there are improvements on both of those fronts this time around.  In fact, Lucifer’s Knight #2 is more successful at nearly every turn, opening up the mystery of what is happening with heaven, hell and teenage peer groups in interesting ways, with art that, while still a little indistinct in places, gives us well-done fight sequences and teen interactions with equal skill, earning 3 out of 5 stars overall.  There are still some problems with how much story we get (in my eyes, this issue and #1 could have been combined into one and edited a bit for a much tighter introduction to this world), but the strength of this issue convinces me to hold on long enough to complete this arc.

A little exposition, a little action, and another ending that just sort of... happens. I wish these first two issues were one single story.