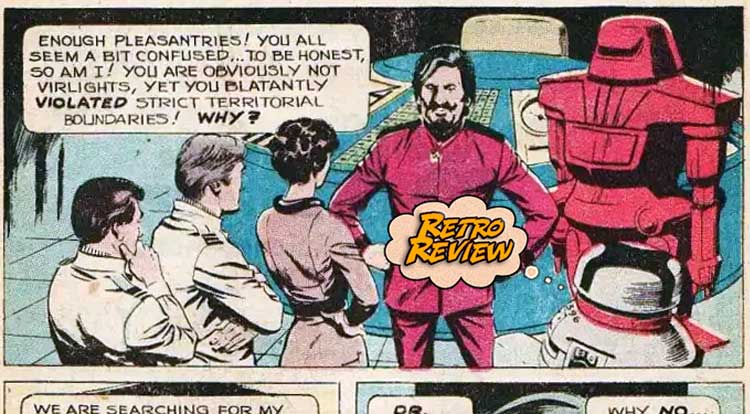 Once upon a time, when I didn’t know what comic books were, I encountered one that still haunts my mind…  Your Major Spoilers (Retro) Review of The Black Hole #3 awaits! Previously in The Black Hole: Thanks to an impulse purchase this week (and the film being available on Disney+), I’ve been thinking about 1979’s ‘The Black Hole’ again.  Back in those pre-streaming days, we couldn’t watch films over and over, which forced us to read the novelizations and comic book adaptations of our favorite films, which could be…  Let’s say “mixed” in their quality and fidelity to the source material.  So it was with the ongoing monthly comic book adaptation of ‘The Black Hole’, a film which ended with a bizarre and impressionistic sequence involving heaven and hell on the other side of the titular collapsar.  This issue picks up the only way the story could: By completely ignoring ALL of that… Having traveled through the black hole, the surviving crew of the Palomino immediately finds the laws of nature to be rejected, with their course passing through a sun with no damage, finding that size and disatance are meaningless, even finding their own duplicates traveling through space.  Then, their ship is captured in a strange bubbles and pulled back to a very familiar spacecraft: The USS Cygnus! If you’re not familiar with the plot of the film, these three humans and one robot barely escaped their universe’s Cygnus with their lives, then watched it torn to pieces by space debris and sucked in to an unknown, Heironymous-Bosch-inspired fate.  Their suspicion of Reinhardt and his robot enforcer is understandable, given the death of two of their crewmates at their hands and/or terrible pincers, but their parallel universe counterparts are instead focused on the mysterious “Virlights”.  And speaking of twisted duplicates… …Old B.O.B. is twisted visually as well as metaphorically, looking like he had been shaped out of clay by Patrick Swayze and Demi Moore, then left to spin on the wheel for a little too long.  Regardless of his squishiness (which, I have to say, even bothered me way back when I was nine and knew nothing about comic book art), he shares the cleverness and resourcefulness of the prime universe B.O.B., helping the crew to formulate an escape plan. predicated on the sentries being dumb enough not to realize that the flying robot has been flying all this time. For all my complaints about B.O.B., the  representations of V.I.N.Cent in this issue are pretty solid, making me think that the artist had one of the Mego toys for visual reference, and McWilliams does a very good job with the human faces and some of the space ships.  (Mostly the ones that feel retro/Flash Gordony, but still, they look really neat.)  He does not, however, have the same handle on the terrifying crimson death-bot called Maximilian. Unlike the prolonged combat that made up a large chunk of the film’s final act, this one is over in a single panel, with the crew of the Palomino successfully sabotaging the fighter ships that this Cygnus inexplicably has and escaping in a ship reminiscent of Lost In Space’s Jupiter 2. Sharp-eyed readers may recognize this as the very ship that the crew saw in the opening pages of this issue, making it look as though time in this world is as complicated as space.  It’s a puzzle that never gets fully unraveled, as issue #4 is incredibly difficult to track down, being only available in multi-packs and in very limited numbers.  The Black Hole #3 (sometimes also known as ‘Beyond The Black Hole #3’ thanks to the cover dress) is a book that doesn’t quite appeal to me as a hardcore fan, but also doesn’t seem like it’d draw in any new ones, with okay art and a disordered story making for a sort of disappointing 2 out of 5 stars overall.  For my part, it’s worth the price, but then again, I’ve never found this particular issue selling for more than a couple of bucks, so mileage, as always, may vary.

I remember this book from my childhood, and even then I realized it was strange, off-putting and kind of ill-formed, but I still have multiple copies that I cherish. You might want to consider your own preoccupation with the characters of the movie before you purchase one of your own.