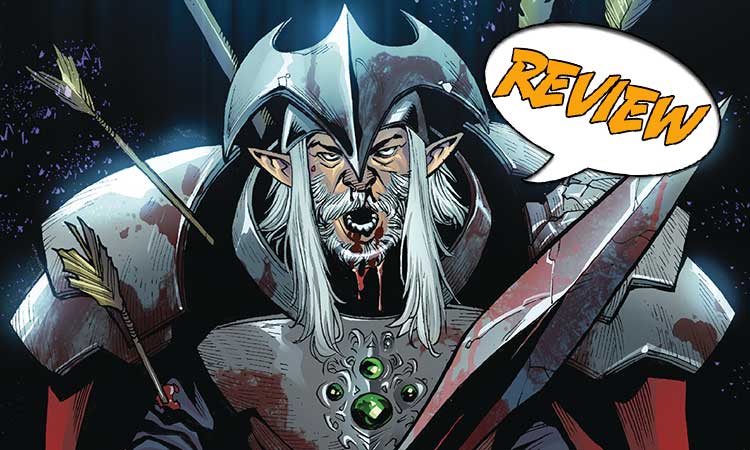 In Twin Worlds #4 from Action Lab Entertainment,  Zara, guardian of Vin Raja’s twin grandchildren, whisks them to safety.  In doing so, she tells the children the story of the times before the Great Portal, and what happened when the humans arrived.  Tune in to your latest Major Spoilers review! Previously in TWIN WORLDS: Darukan Vin Raja has led his Drakkarn forces valiantly against the dread might of the human colonizers, to know avail.  Refugees flee against the ruthless tactics of cruel humanity, who have plunder the planet for its energy wealth.  But hope springs eternal – do Vin Raja’s twin grandchildren offer a last, best hope?

TELL ME A STORY

Twin Worlds #4 lives up to its title by bringing us a tale of how Vin Raja united the tribes of his homeworld, just as the humans arrived and began their conquest of the planet.  Writer Rami Al-Ashqar’s script is the perfect balance of flashback and present day events, allowing the reader a better understanding of the backstory of Tassaroth, Vin Raja’s pivotal role in it, and how the arrival of the humans unbalanced everything.

It’s a real skill to be able to tell a story like this, knowing when to give enough information without it being an info dump, and then knowing when to return to the main narrative.  While there’s nothing we’ve not seen before here in this tale of the one true hero uniting his people and leading an uprising to overthrow the powers of darkness, it’s done in such a way that its an entertaining read.  I suppose if Al-Ashqar had attempted to be too innovative, I might’ve been turned off by it, which goes to show how conservative my instincts are regarding heroic fantasy.  So be it.  Regardless, he crafts a really interesting backstory that I enjoyed reading.

Another plus with Twin Worlds #4 is the excellent artwork from Jethro Morales.  He has a real eye for composition, as seen in the splash page at the end of the issue.  It’s a really striking image of three figures – the victor, the vanquished, and the dragon flying against the moon.  Elsewhere, Morales lovingly crafts scenes of massacre and mayhem, as the two sides – human and Drakkara, come together in a massive battle to decide the fate of the planet.  Morales brings a real sense of energy and pace to the fight scenes, with a sense of heft and drama to each panel.  Figures grimace as they swing their weapons; innocents react against their impending slaughter; arrogance stamps the features of the human colonizers.

The artwork, Morales skill with pencil and ink, and colorist Bryan Magnaye, really pops from the page.  A lot of it is at night, especially the scene where the dark wizards work together to track and kill the twin grandchildren, which underscores the dark tone to proceedings.  Twin Worlds #4 is a dark book, after all.  The act of looking backwards in the flashbacks only serves to highlight how terrible the situation of the Tassonites is – their union shattered, their people betrayed, their women raped and murdered, and the humans stomping over their civilisation and culture.  It’s a sobering depiction in comics of what we see ourselves in hotspots around the world.

if you’re interested in a nice mixture of heroic fantasy and science fiction, then Twin Worlds #4 is for you.  Quality writing and some spectacular art are indicators of creators at the top of their game.  If the setting and storyline isn’t the most original, that’s because the tropes of both these genres are tried and tested, and provide the maximum entertainment for your dollar.

Primarily a flashback story, Twin Worlds #4 is a waypoint in the longer narrative of this series. Seeds are planted for future occurrences, as Zara and the twins progress towards safety under the eye of a dark sorceress bent on their deaths.