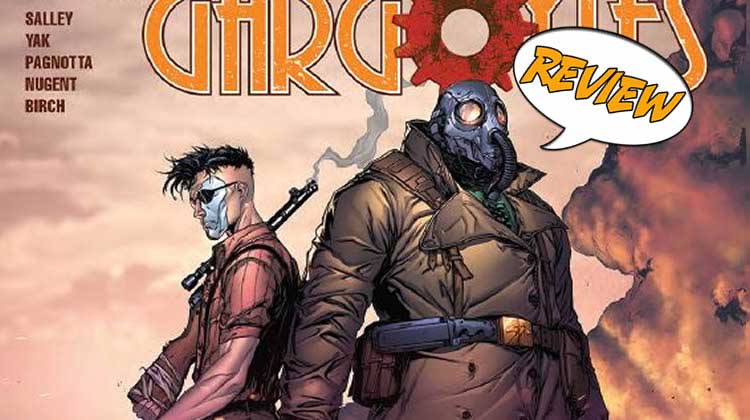 Broken Gargoyles is an upcoming comic book mini-series from Source Point Press that follows the wretched survivors of war who are cast aside by a society looking forward to a thriving utopia while still hanging on to the world that used to be. SOLICITATION: Broken Gargoyles is a dieselpunk post-WWI mini-series about men who come home from war injured and forgotten, and how they look for redemption and honor.

RECOVERY IN NO MAN’S LAND

It’s the 1920s, and the U.S. is trying to move past a terrible war. New York City, with its tall buildings and massive population, is attempting to pull itself together while Arizona is a virtual dust bowl.

The story in this comic focuses on two men. The first is William in NYC, obviously stitched back together in a hurry after being injured. Part of his face is covered with metal, hiding an appearance he’s obviously sure others will find repulsive. He can’t keep a job, so his wife and son are leaving him as the book opens.

On the other side of the country is a man completely hidden by a mask and heavy clothing. He seems to be a super-soldier, someone on a mission who doesn’t mind using his imposing appearance and strength to intimidate others and make things happen.

The two apparently are on a collision course, which likely won’t go well for either of them.

The world around them is a dark and moody one, and even a circus we encounter is a house of horrors. It’s a world without hope, and that’s an awful place to be.

Writer Bob Salley brings his years of comics scripting experience to the title. He’s tackled science fiction in Salvagers, fantasy in Ogre and Ogres, and humor/genre awareness to Jasper’s Starlight Tavern. He’s created unique worlds and characters aplenty, and that experience has helped him weave a powerful tale of conflict and all-too-human people, many just trying to survive.

The dialogue is gripping, and the plotting moves at a rapid clip, strong enough to keep our attention while also doing a lot of world building at the same time. It’s a “real” world with just enough differences so we’re not at all sure what’s going to happen next. There’s a fascinating contrast between the two locations, New York all built up into towers and buildings while Arizona is much more “natural” with its deserts and wide-open spaces. However, both show significant signs of decay and loss, so they aren’t necessarily all that different, really.

One of the interesting elements of the book is that, when the “soldier” speaks, the words and word balloons are red in color and the balloons themselves are shaped like gears. I’d be fascinated to hear just what that is intended to sound like! Like the grating sound of metal on metal? We know it’s something different, that’s for sure!

I truly believe that art is what initially gets our attention when it comes to comics. Then the story is what keeps us coming back. The art in this comic is a perfect example. It’s epic in its feel while showing the various locations clearly.

As always, two things determine how strong I feel the art is. First is how understandable the facial expressions are. The expressions on the various faces are well done, and I also found the mask (resembling a gas mask—apparently trying not to be contaminated by the world around him) being used well to communicate what its wearer is going through. The use of various angles really are chosen appropriately, and it keeps us from feeling he’s more machine than man. Then, too, the contrast between the man with some metal and the one that we can’t even see is a powerful one. Well done!

The action sequences are also critical. While much of this issue seems more drama than battle, when we do see fighting break out, it’s often painful enough to make me wince. Ouch! It’s very clear who is doing what to who, and we need that especially given the metal plate on one guy’s face and the lack of visibility with the other. Honestly, fighting SHOULD hurt, and in this book, boy, does it ever!

I have never fought in a war, but I’ve seen the way people who have fought in that type of conflict are not the same when it’s finally done. This comic is addressing the attempts some make to try and move past that change (often a loss). Is it futile to try and do that? We hope not, but we can’t help but worry about the characters in this story. They live and breathe in our minds, and they’re real enough for us to care and to want them to succeed. The awful thing is that nagging notion in the back of our minds that they won’t be able to no matter how hard they try.

On some levels, this comic is like watching a car accident in slow motion to me. I want so badly to look away, to leave things forever as they were before the deadly crash takes place, but we can’t help it—we have to look, and thus I have to know what will happen next no matter how dark the outcome may be. It’s just that compelling! And it does say “broken” in the title, right?

Of course, given the current circumstances surrounding the pandemic, I’m not exactly sure when this comic will hit the stands. It can be ordered through the Source Point Press website as of May 1, so it’s likely it will be available no later than July 1. But stay tuned! Nothing is certain as it stands right now, but one thing I do know is that this comic is a must-read for me! If you dive in, I’m sure it will be for you, too!

On some levels, Broken Gargoyles is like watching a car accident in slow motion to me. I want so badly to look away, to leave things forever as they were before the deadly crash takes place, but we can’t help it—we have to look, and thus I have to know what will happen next no matter how dark the outcome may be. It’s just that compelling!