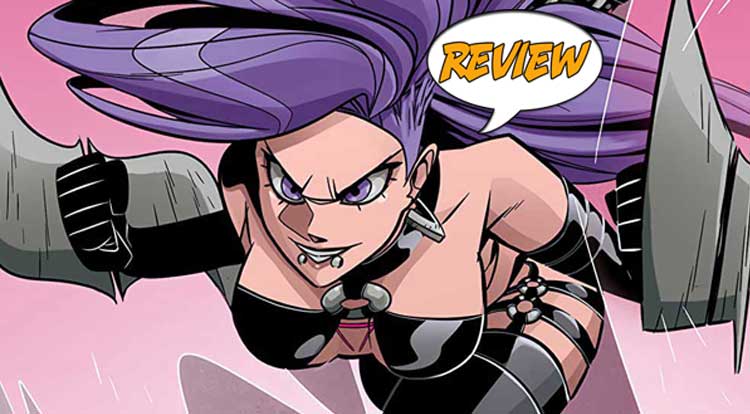 A threat has arisen so grave that Vampblade has had to call in backup… Enter the Zombie Tramp!  Your Major Spoilers review of Vampblade Season 4 #9 awaits! Previously in Vampblade Season 4:  So much $#!% has hit the fan that Vampblade must do the unthinkable.  She must call on the help of Angel Lynch!  The Danger Doll Universe event building up to Vampblade’s epic 50th issue begins here with this crossover with Zombie Tramp!!

The splash page of this issue promises an alien/vampire hybrid mech creature stalking the streets of Detroit, prompting Vampblade and a horde of similarly powered folk to leap into action. (Contextually, I believe that they’re also blade-wielders, but I’m not sure if they’re also vampires.) The military fails to make a dent in the creatures and things start to get very explodey when a sudden teleportation signature arrives… then another… and another. Vampblade’s Danger Dolls colleagues Black Betty, Dollface and Zombie Tramp arrive, thanks to the genius of MIT hacker Emma, but since there’s a new Zombie Tramp (and they killed the old one) confusion reigns among the reinforcements. They finally rendezvois with the alien bladey folk, explaining that they’re all being attacked by a terraforming Earth into Glarkian life forms, but they can’t assimilate mechanical life forms for some reason. As the issues ends, Vampblade is about to be eaten by a giant alien, hoping that they’re somehow going to turn out to be friendly…

The build-up to the big fiftieth-issue extravaganza is in full swing, and I will say this: It successfully replicates the feeling of being thrown into early issues of ‘Crisis On Infinite Earths’ thirty years ago. That’s a good thing for excitement and action, but not so good for comprehension as a less-seasoned reader. I’m still not 100% sure that Vampblade is the transformed vampire-hybrid seen in the first and last pages, and much of the issue is devoted to a three-way conflict between Betty, Dollface and Zombie Tramp which never actually identifies Dollface by name and assumes a lot of familiarity with the supporting cast of their books. That said, it’s an issue that grabs you by the hand and drags you along for the ride, especially the art, as Maccagni throws it all on the page. A scene of Air Force fighters doing a strafing run on a Glarkian force-field is wonderfully cinematic, and everyone’s facial expressions and body language are clearly denoted. Even the flying sperm/ghost has incredibly facial language, making the issue fun to just look at.

The mysteries of this issue are myriad (Who are these people? Why are they fighting? How’s come they’re mostly naked?), but they mostly work in the right way, making me want to know the whys and wherefores of the situation rather than shutting me out. Vampblade Season 4 #9 succeeds in making me want context (though not providing that context is a little frustrating) and the art is good at sweeping past moments that require knowledge I don’t have, leaving the issue with a still better-than-average 3 out of 5 stars overall. I think I’m going to be paying attention as this book builds up to the big #50, and I hope that they change the numbering to reflect it.

We're thrown right into the middle of things, which makes for an exciting (but not always entirely narratively clear) all-out battle issue, with energetically cartoony art.