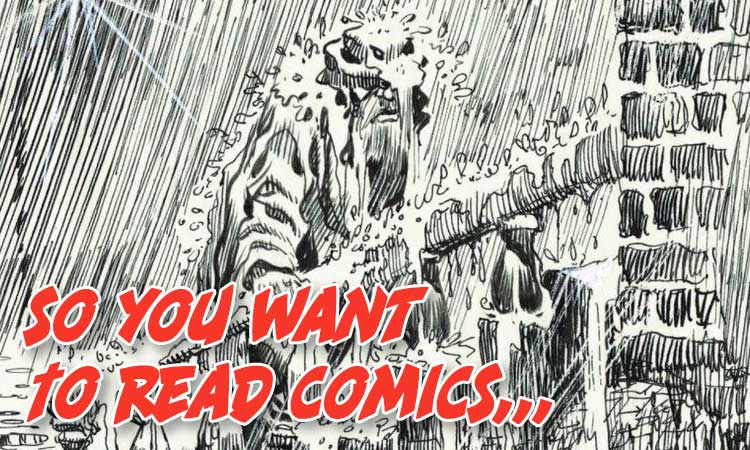 So You Want To Read Comics (Classic Film Lovers Edition)

As a young person, I didn’t have a lot of time for classic movies.  Like a lot of kids I mocked how old they were and was confused by the sensibilities that were foreign to my 90’s mindset. Yet, as I grew older, those classics became more appealing.  Almost overnight I found myself drawn to the grandiose characters, the unsubtle drama, the sprawling plots that span eras, all of it latched onto the pleasure center of my brain and didn’t let go. What was more surprising though, was that the things I enjoyed about those films, existed in my favorite medium: comics.

It may seem counterintuitive that comics would have a lot of things in common with old movies.  I mean, on a surface level: Films move, comics don’t.  But, once a few layers are peeled back the similarities are apparent.  The easiest similarity between the two are the characters.  Those larger than life, powerful, characters like Vivien Leigh’s Scarlet O’Hara or Marlon Brando’s Terry Malloy have similarities to the likes of Doctor Doom and Watchmen’s Nite Owl.  On top of that there’s no shortage of plots that are deeply personal, yet feel Earthshaking, every other week the universe is saved or destroyed, or someone’s life is torn apart then pieced together again.

What follows are my suggestions for comic books that exemplify some of the best parts of classic movies or simply that Old Hollywood feel.

A Contract With God

A quick disclaimer, my first pick was originally going to be The Name of The Game by Will Eisner, which follows one family as it moves through the decades. Unfortunately it’s a little difficult to get your hands on. Instead, I’ve gone with what many consider Eisner’s masterpiece.  A Contract With God follows the stories of a handful of tenants from the same Bronx apartment building and it’s these characters that give this graphic novel a classic movie feel.  There’s the story of Frimme Hersh, a pious man who turns away from his simple life to follow the path of greed and money, very much like Charles Foster Kane’s path to an empire via yellow journalism.  There’s Marta Maria, an aging opera singer who’s desperation to stay in the limelight mirrors that of Norma Desmond from Sunset Boulevard. The real joy of A Contract With God is the way Eisner is able to take big ideas like faith, poverty, infidelity, and perversion, things that could be the theme of whole movies and distills them down to short vignettes that tie together to tell an grand tale of a place not just people.

Wait! Don’t close the page. Yes, I am referring to the Hanna-Barbera cartoon. But, not the same way as you might think.  A while ago DC Comics decided to take a lot of these old cartoons and reimagine them as their “Hanna-Barbera Beyond” line.  Wacky Racers became a Mad Max style romp, The Jetsons as a hard sci-fi story involving asteroids and AI, and so on. That brings us to Exit Stage Left: The Snagglepuss Chronicles. This comic book reimagines Snagglepuss as a playwright in the 50s who gets caught up with the House Un-American Activities Committee. Basically, this book uses Snagglepuss to tell a story that is all too familiar to a lot of entertainers, creators, and Hollywood elite. Now there might not be a direct tie to a specific movie here, but if you’re a fan of classic films you might be familiar with names like Dalton Trumbo and Albert Maltz who were blacklisted due to the HUAC.  Snagglepuss’ story here shares a lot with these people who were influential in creating some of the most beloved films in their day.

So there they are, my recommendations for all the classic film buffs out there. Let me know in the comments section if you checked either of these out, or if you have your own recommendations, I’d love to hear them.