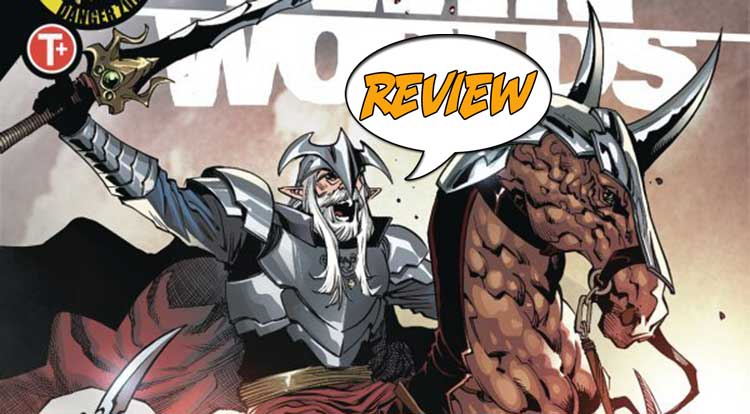 In Twin Worlds #3 from Action Lab Entertainment, Bin Raja consult an oracle then lead his army in a last stand, watch as human colonisers plot their future climb to power, and witness how the mix-blood twins handle the realisation they belong nowhere – not Earth, or Tassaroth.  It’s all kicking off in your latest Major Spoilers review! Previously in TWIN WORLDS: Humanity has leapt across the stars, opening a portal above the world of Tassaroth.  In effect, humans are the ‘alien’ invaders, occupying the planet and subjugating most of the native Drakkaran.  The leader of the Drakkaran, Vin Raja, carries his war against the humans and Drakkaran traitors who work for them.  But what dark secret in the shape of his mysterious twin grandchildren does he harbour?

ARE WE THE BADDIES?

Twin Worlds #3 explores further the impact of colonisation against a primitive people, but human invaders, inside a broader story of a struggle for liberation.

Writer Rami Al-Ashqar combines a story full of action, with a look at the motives pushing the colonising human forces towards their end game.  Historically, colonisation in our history has been an unmitigated disaster – pandemics and exploitation, slavery and the theft and destructions of cultures.  While there are defenders of colonisation still out there, roaming the fringes of acceptable thought, by and large, it has come to be regarded as massively disruptive and deadly.

As the Tassonites are finding in Twin Worlds #3.  The advent of the humans through the Portal, which started as a scientific mission, swiftly became one of conquest and exploitation.  One of the humans, Marcus, is the chief scientific officer.  He and his work were rapidly shunted aside when it was realised that a powerful new source of energy existed in Tassaroth, and the race was on to ship it back to Earth.  To do so, land armies had to be brought across, and led by General Auron; they have allied with some of the races of Tassaroth, and begun a campaign of conquest.

Arrayed against them are the Drakkaran, led by the Darukan (chieftain) Vin Raja.  There’s a parallel developed in the story here with the treatment of Native Americans by European colonisers – the signs of friendship at the start, then the spread of colonisers into native lands, playing different tribes against each other for advantage, then wholesale invasion and destruction.  The destruction meted out, accidentally and deliberately, against the Native American peoples in North America (and Central and South America) find there echoes in Twin Worlds #3.

Al-Ashqar has combined the science fiction and fantasy elements pretty well.  There are tropes galore, including the hidden prince/princess in the shape of the twins, an oracle foretelling ultimate salvation, the villainous overlord in his castle (or spacecraft) and the noble warrior and his people fighting for freedom.  Any relationship to Star Wars is purely coincidental (and just came to me as I wrote the previous sentence!) but adds to the fun of the experience.  The action is fast and furious, and if the dialog aboard the spaceship as the carnage continues groundside is a little clunky, it does sketch out the characters and their motivations well.

FILLING IN THE BLANKS

I really took to Jethro Morales artwork.  He’s not afraid to show the results of battle, with heads being lopped off, children being pitchforked into the air, and mothers shot through the chest as they attempt to flee with their babies held to their chests.  It’s gory at times, but it tells part of the truth of the horror of war.  His characters have a lived in look, with lots of lines and creases giving them character and age.  Vin Raja, for instance, carries heavily the burden of responsibility and hope, as shown in his careworn face.  Very good use is made of light and shadow, especially in the early scenes with the oracle, making the cave refuge a menacing place indeed.  On the field of combat, Morales brings a strong sense of the chaos of war, especially in one memorable page, which he structures fantastically well.  There are the sprawling combatants at the bottom, with the eye being drawn to the top of the image where a laser rifle wielding fighter guns down a woman, while a banner man waves the human flag.  It’s powerful, riveting artwork.

Al-Ashqar doesn’t pull any punches here in depicting the humans as being the bad guys, eager to put aside morals in favor of power and riches.  The Tassonites are a little better, with their struggles understandable, and their riven politics echoing a little of our own.  Don’t expect to come away from this with a happy view of human behaviour, but you will at least appreciate the re-examination of a dark period of human history in this fun frolic on an alien world.

A satisfying read from beginning to end, Twin Worlds #3 gets to the heart of the struggle between the humans and the Tassonites, and within the communities and people making up the world of Tassaroth. Prophecies are announced, and wars fought. It all sets the stage for the next exciting chapter.