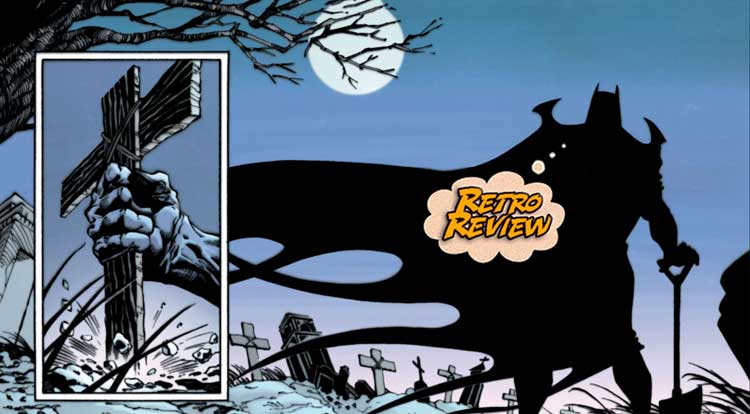 The legend of Batgirl: Who she is and how she came to be!  Your Major Spoilers (Retro) Review of Batman #567 awaits! Previously in Batman:  After an Earthquake devastated Gotham City, including razing Wayne Manor and downing multiple skyscrapers, the various costumed personages of the city were forced into new roles.  Catwoman used her theivery knowledge to stop looters, Poison Ivy becomes the city’s source of plant-based food and The Huntress became a new iteration of Batgirl.  Worse still, Bruce Wayne left town after the United States government washed their hands of the city, declaring it No Man’s Land, no longer a part of the United States and sending the entire city into a spiral of corruption, crime and Mad Max costuming.  Now, even old foes like Two-Face are more dangerous than ever, as Batman finds when he discovers a group of innocent people murderd for literally no reason.  He sets about burying the dead, not realizing that he’s being watched from the shadows… It’s not 100% clear to me why Batman is so down on Helena Bertinelli being the Batgirl of the newly shattered Gotham City, but he nonetheless doesn’t want her wearing a bat-symbol in his town, and his disappointment here foreshadows the upcoming change of female bats.  Hey, speaking of change, without full use of her usual internet resources, Barbara Gordon has been reduced to using shortwave radio and couriers to get things done in Gotham.  One of those couriers is a young girl named Cassandra, who speaks no English and is taking lessons from Babs in-between runs across the (incredibly dangerous) wasteland.  Cassandra is more than just a runner, though, as she realizes that someone is stalking Comissioner Gordon, one of the last remaining authority figures in the city. I’m not a fan of Damian Scott’s facial structures as a whole, but this sequence stands out as some good storytelling, reminding me at point of the work of Scott McDaniel.  The assassin is shocked by the sight of the girl in his crosshairs, but is more spooked than one might expect a professional killer to be, for a very good reason, as Cassandra explains to the shocked Gordons. Elsewhere in the city, Batman chases Two=Face to ground for his latest bloody crimes, and we clearly see the toll that Gotham’s torment has taken on The Dark Knight.  “There’s no judge to sentence you,” he intones, “no jury to convict.  So what’s left?” It’s a pretty strong moment for Batman, and unlike many shows of restraing, it genuinely seems like he might be ready to cross a line no one ever thought he’d cross.  It’s hard to get past my built-in “They’ll never do something like that” response, so I’m doubly impressed by it. But remember what I said about the character’s heads?  It really becomes impossible to ignore when Cassandra locks the Commissioner safely away to confront her murderous father, using what Barbara has taught her. I’m seeing bits of Todd McFarlane in this page, but the overexaggerated features and oversized heads really undermine what could have been a very powerful sequence.  The issue ends with Cassandra tackling her father and hurling them both out the window to what might have been their doom, ending Batman #567 on a cliffhanger note that doesn’t quite hit home, thanks to more cartoony art, leaving us with 3 out of 5 stars overall.  The ‘No Man’s Land’ crossover takes a lot of liberties with law, with physics and with basic civics, but it managed to be the short-term game-changer that DC wanted, and this issue makes for a better-than-average chapter, even if it doesn’t make a lot of sense on its own.

It's a very fragmented era for Batman and the art is more cartoonish than I'd like, but there's a lot to like here, and we're on the cusp of seeing the best Batgirl in action.