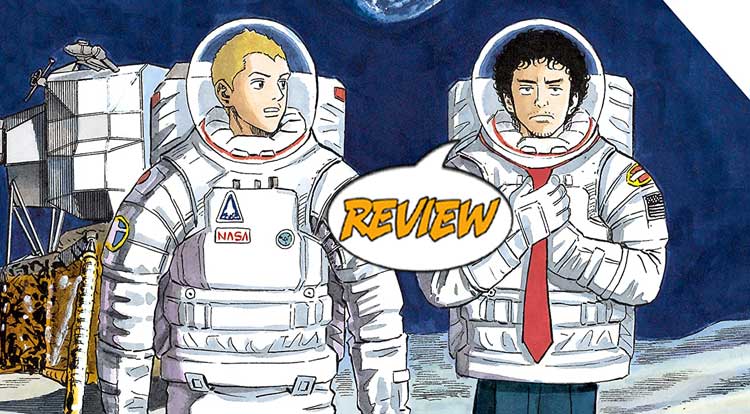 Two brothers once looked to the starry skies as children and made a promise…Your Major Spoilers review of Space Brothers #353 from Kodansha Comics awaits! Previously in Space Brothers:  Two brothers looked to the starry skies as children and made a promise…  Now, in the year 2025, the younger brother, Hibito, is carrying his out.  He is an astronaut who has been selected as a crew member for mankind’s first long-term base on the moon.  Meanwhile, the older brother, Mutta, has just been fired from his job and is unemployed, but decides to trust himself just one last time.  A text message from Hibito sends him applying to be an astronaut too and shooting for the stars ..

“THE TWO OF THEM ARE STUCK UP THERE…”

This issue begins with Mutta and Hibito trapped on the lunar surface, while the ground crew tries to work out a way to get them home.  The simplest route is also the one with a ten-meter high wall that they can’t get over, and it seems like all may be lost.  That’s when two of the rew, Kenji and Reiji, arrive with their new plan.  After seeing the brothers messing around in low gravity, they realized that by stacking TWO robotic stitch units, they can easily clear the wall.  Much of the issue is spent testing and refining this theory, and when it seems like it’ll work, Kenji insists on delivering the news himself on linkup, leading to a really fun moment where he and Mutta shake hands remotely across space.  It’s a really neat moment, one that is followed by the most important moment of the story: “Let’s go get ’em!”

On some level, picking up a comic with #353 on the cover is kind of exciting in itself, reminding me of when I started reading comics in the 80s.  The story is short, plot-driven and very closely focused, which also reminds me of those long ago days of comics, when each issue was considered to be a chapter in itself, with a beginning, middle and end, and Koyama’s work pulls that off with aplomb.  The character designs are bold and deceptively simple, but full of life and vitality, and even though the majority of the issue is people discussing plans and diagrams, it never gets boring.  Having never read an issue of this story, I still feel satisfied with the experience of reading this book and I would be happy to come back for more in the future.  Best of all, even though it’s a black and white book, there’s a broad range of textures and shades to the story, showing off a number of “colors” without actually having any.

BOTTOM LINE: COME FOR THE ISSUE NUMBER, STAY FOR THE FUN

Even though I grabbed this issue mostly because I wanted to review a book with a triple digit number, Space Brothers #353 turned out to be a really good read, with enjoyable, expressive art and a tight story that actually had me cheering along with the astronaut’s triumph, earning 4.5 out of 5 stars overall.  As someone who doesn’t always notice manga and manga-style titles, this one has me reconsidering that bias.

All The Best Ways

Unexpectedly exciting and visually amazing, it's the comic I didn't realize I wanted to read.