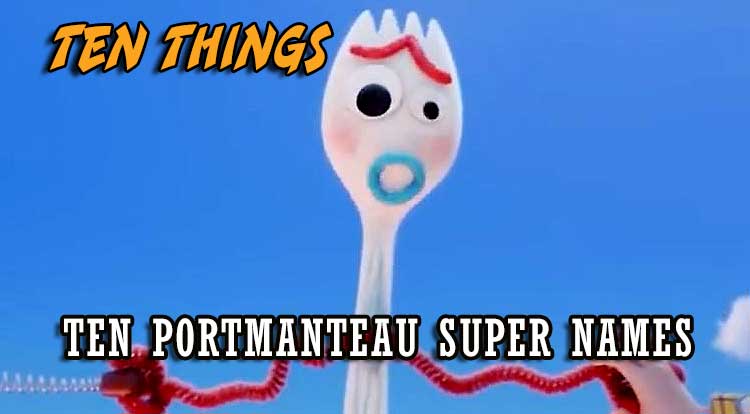 Sometimes, you want to convey two things at once, but you still want that cool one-word name.  Fortunately, there’s a solution for that.  Welcome to Ten Things: Ten Portmanteau Super Names!

Whooshman-Bicarbonate Films, in conjunction with An Amateur Comics Historian and Magnitude, short for ‘Magnetic Attitude’, Presents: An interim Captain America, assigned when Steve Rogers refused to become a direct part of the United States military, John Walker’s return as a West Coast Avenger was shocking, and not just because he took on another of Rogers’ old costumes.  He was forced on the team by the Commission for Superhuman Activies, which angered team leader Hawkeye, but his new cool name almost made up for the insult. An unnamed gang leader who apparently admired Doctor Doom’s mask aesthetic, Carjack was a minor adversary of Thunderstrike during his crusade to clean up New York.  He was eventually killed by another villain, The Judge, and left as a warning for other would-be villains.

His name is a portmanteau of “car” and “hijack”. A would-be member of Wildguard, the first super-team to be assembled as part of a reality show, his real name is unknown, but his nom de guerre is an agglomeration “tough” and “teflon”, befitting his durability and overall toughness.  Though he made it to the final round, he did not make the cut for the team. Initially selected to be part of Harley Quinn’s support team, the Gang of Harleys, the DiAngelis sisters each had a different schtick.  As far as I can tell, only stoner girl Gnarly Quinn got an actual alias before their mother arrived to pull them from the team…

…because they’re all FOURTEEN YEARS OLD.  Obviously, they are named as a pun on “Quinn” and “quintuplets”, but you can’t really blame Harley for not realizing they’re just kids.

A recurring foe of the Savage Dragon, Stacy Swan accidentally gave herself technopathic powers during a lab accident.  Her chosen alias is the term for a combined modulator and demodulator, a device to convert data for transmission from one computer to another. The mascot of AAU shoes in the 1970s, the Shuperstar (combining “shoe” and “superstar”, natch) battled ridiculous foes like MIssile-Toe, The Sinister Sole and The Dirty Sneaker in his quest to sell kids new sneakers.  His appearances were one-page adventures similar to the Hostess Twinkie ads of the era, and are now remembered only for the truly heinous foot-related puns they spawned.  “Shupernatrual powers”, indeed. A native of the future of Warp World, a reality where pairs of Marvel heroes were amalgamated into single heroes, the Arachnid/Knight hybrid Miguel Ravage combines Spider-Man 2099 with the less-fondly-remembered Paul-Phillip Ravage for a one-shot in-joke that nonetheless has a KILLER costume. An H-Dial form of Roxie “Manteau” Hodder, her name combines “electrocute” and “cutie” and the peek-a-boo nature of her costume convinced Manteau not to leave the house.  She’s not as offensive as other heroes in the ‘Refusenik Dossier’, like Kid Torture, Doctor Cloaca or Captain Priapus or as outmoded as Chief MIghty Arrow, but one can still see the problem.

Identified by Norman Osborn with the potential to be a living weapon of mass destruction, Jennifer Takeda’s name is derived from “hazardous materials”, befitting her ability to generate radioactive poisons and deadly substances from her very pores.  Jennifer originally had to wear a complete containment suit, but has become more adept at controlling her powers, allowing her to wear normal clothes part of the time.

You feel bad that she has to wear it ALL THE TIME, but it’s such a great suit that it hurts a little less. Yes, friends, it’s the one I didn’t realize fit the category until I actually looked up a list of portmanteau words.  Short for “cybernetic organism”, Victor Stone was a champion athlete until an accident shattered most of his body.  His father rebuilt him (he had the technology) but it took years for Vic to come to terms with his new metal self.  Even with those problems, though, he joined the New Teen Titans and used his brains and his strength to punch evil and look good doing it.

Thanks to Major Spoilers’ very own Rodrigo (@FearsomeCritter) for this week’s topic.  Feel free to follow along @MightyKingCobra for more Ten Things madness on Twitter or check out the full Twitter archive here!  As with any set of like items, these aren’t meant to be hard and fast or absolutely complete, if only because language is always evolving and there’s a new wordment every minsetime.  Either way, the comments section is Below for just such an emergency, but, as always: Please, no wagering!