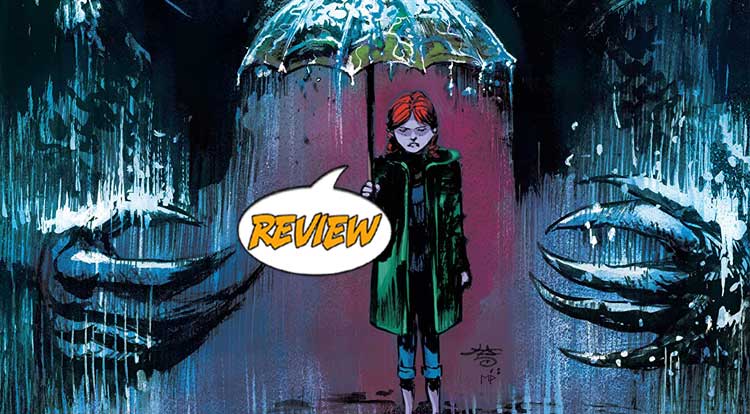 Maddie just wants to live a normal life.  But her monster has other ideas…  Your Major Spoilers review of Sweet Heart #2 from Action Lab – Danger Zone awaits! Previously in Sweet Heart:  Maddie just wants to live a normal life.  Unfortunately, she has to deal with public ridicule for the monster that follows her and struggles with contempt for her parents’ decisions.

Our story begins at Ellicott City High School, where new kid Maddie is getting the first day explanations of the strange monsters that follow certain people around.  She wants to know more about a variety called ‘Stringers’, but her teacher insists that they’re not as dangerous, continuing her lesson about the Bruiser variety.  A kid named Justin needles her, calling her a “Tag” and mocking her all the way back to her locker, but when he bad-mouths her father, Maddie hauls off and punches him right in the face.  I have to say, I’ve never been so happy to see a pre-teen get a knuckle sandwich, even if they consequences from both her principal and her mother are immediate and unpleasant.  Maddie is given after-school detention, which means she can’t help her elderly grandmother, but as the issue ends, it looks like grandma’s got quite a few things on her own plate.

“ONLY A REAL MONSTER WOULD DAMN HIS ONLY CHILD…”

The world-building in this issue is pretty much wall-to-wall, and I’m very impressed with how naturally and organically it all comes out in these pages.  It never feels like the characters are about to look at me and say “EVERYBODY GOT THAT IMPORTANT PLOT POINT?”, but nearly every conversation imparts information that helps to deepen and explain the story.  The reveal of Maddie’s own Stringer is also well-handled and dramatic, made even more so by the super-creepy art.  There are moments in this issue that remind me of John Layman’s work on ‘Chew’, with a much gorier streak of Bernie Wrightson or Graham Ingels in the design of the monsters.  I’m not a huge fan of the ultra-green coloring, but it is effective in giving the creatures an inhuman look amid a much more mundane and subdued color palette.  Perhaps my favorite part yof the issue is the amount of emotion Maddie expresses throughout, from anger to disappointment to smug satisfaction, all of which is clearly shown in  Francesco Iaquinta’s art.

Sweet Heart #2 isn’t really the book that I expected, and it’s certainly not one of your standard brands, but it is a solid comic with creepy and expressive art and a story that I’m quite interested in seeing unravel, earning a well-deserved 4 out of 5 stars overall.  Perhaps the worst part of it all is seeing such a realistically awful and dehumanizing high school in action, but I expect I’ll be checking in on this book again.

It has an interesting premise, it's creepy and it's got excellent art. What's not to love?