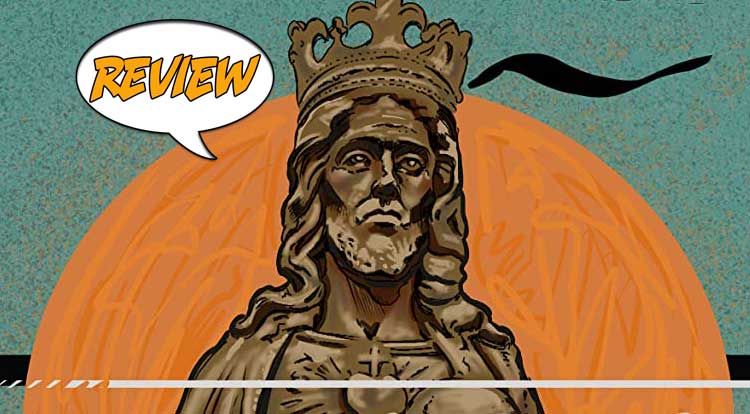 In the wake of a strange disaster, Ker and Joanna must defend their newfound family…  Your Major Spoilers review of South of Yonder #1 from AAM – Markosia Publishing awaits! Previously in South of Yonder:  As a freak lightning storm kills off an ever-growing percentage of the human population, Francis Kershaw escapes from an Arkansas state prison and begins rescuing the dogs who have been displaced as a result of their owners’ deaths.  Ker takes the dogs to Joanna, a veterinary technician, and together they rehabilitate and house the forgotten animals.  As the storm continues, some surviving members of the rural southern community begin to take advantage of the chaos, forcing Ker and Joanna to defend their new family…

THE FATE OF MEN AND BEASTS IS THE SAME

We open in prison, where Francis “Ker” Kershaw is being held for unspecified crimes.  As he listens to one of his fellow prisoners preach on the difference between men and animals, he is surprised to see a bolt of lightning blast through the roof and thoroughly fry the speaker.  Then another comes, and another, and another, leaving Ker as one of only a handful of survivors.  Several weeks later, we pick up as he makes his way through a nearly abandoned neighborhood, accompanied by a pair of large dogs.  The people around him are… not well, as one woman screams at the sky, daring the lightning to come take her, while others crash their vehicles and generally react poorly to the end of the world.  He breaks into a home and saves a large dalmatian (ignoring a crying baby and a dead mother, which really unnerved me), returning with his new charge to the Argos Veterinary Clinic.  Ker is greeted by dozens of dogs there, but ends up seeking out another human, Joanna, who is listening with a small group of survivors to yet another apocalyptic sermon…

I THINK THIS ONE’S GONNA GET BOWLING-SHOE UGLY

On the one hand, I really like the general tone of what the creators are going for here and Ker makes for an interesting (if somewhat enigmatic protagonist, especially for a story that channels all the dystopian world-ending tropes.  There are, however, a couple of real issues for me in this issue: The abandoning of a starving infant sets up what sort of life Ker lives quite heavy-handedly, and the repeated use of bloviating preachers gives me the feeling that the story has a very strong, unsubtle opinions on organized religion, which feels intrusive.  Dorland’s art reminds me of William Messner-Loebs stylized work from the 80s, and it has the same upside and downside: The cartoony elements allow for a greater range of expression, but it can also work against the drama.  (The reaction by would-be robber Billy Lee to his brother’s fate is over-the-top and feels silly.)  Even with those problems, though, the narrative feels unique and interesting, and as someone from a rural area of the Midwest, they got the gun-toting rednecks and their accoutrements precisely right.

BOTTOM LINE: NOT FOR THE FAINT OF HEART

In short, South of Yonder #1 sets the scene for a grim-but-interesting look at life after the end of society, with art that gets the job done more often than not and a premise that feels new and unique, earning a better-than-average 3 out of 5 stars overall.  There’s some graphic violence and implications of even darker currents roiling under the surface, so it’s not going to be for everyone, but I enjoyed the premise and fee like it will appeal to those who like horror, post-apocalyptic fiction or the works of Joe R. Lansdale, making for an interesting debut.

It’s looking like a very grim, possibly brutal book, but the story interests me and the art has its moments.. Just be aware of the violence and general tone.