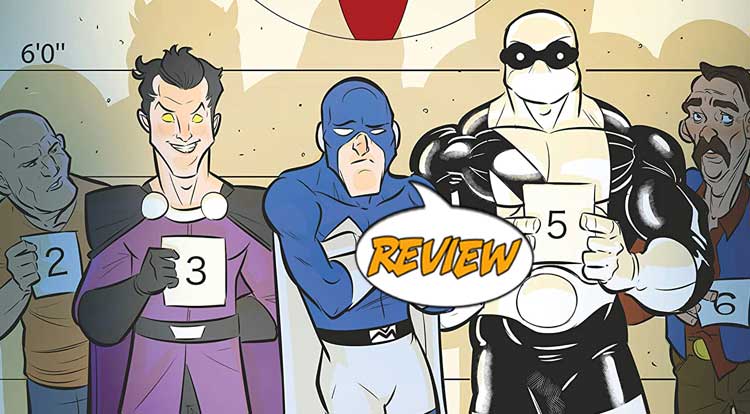 Previously in Villains Seeking Hero:  Once a respected and feared pillar of the super-villain community, the middle-aged veteran baddie known as Master Molecule is being swallowed up by his own professional downward spiral!  Fortunately for the villain, a second chance arrives with him becoming the leader of a new team called the Frightening Five!

We open in the middle of a desperate superhuman battle, as the wicked Master Molecule goes head-to-head with star-spangled hero Lady Liberty… and loses. Badly. It’s a moment we’ve seen hundreds of times in comics, but rather than follow our hero as she triumphantly flies away, we instead stay with Master Molecule as he is booked, released from jail, given a thorough checkup and ends up reporting to his supervisor, an armored villain called Blacksmith. It’s all bad news from there, as M.M. finds out that he’s been demoted to team villain. On the plus side, he’s at least a team leader, but insult is added to injury as The Frightening Fire is only given three members, one of whom is a sorcerer who declares himself the god of the spirit world. When he sets out to get the team their first big win, a simple bank robbery, they are immediately caught by Mr. Infinite, one of the most powerful heroes in the world. Master Molecule prepares to surrender, but The Spirit King responds with a show of power…

…and KILLS the hero dead.

I have to admit, that last page actually made me audibly gasp, and it’s clear that the Frightening Five are officially in the big time, which probably doesn’t bode well for Master Molecule. All in all, this issue is a lot of fun and very engaging, especially the inner workings of a super-villain organization, which is run very much like the call centers of my middle-management days. Blacksmith even has motivational posters on the walls as he counsels Molecule about the changes in his position, but still maintains the authority of a giant armored supervillain. The Malevolence Collective reminds me a bit of the Guild of Calamitous Intent from ‘The Venture Brothers’, and a similar tone to that series can be found throughout the issue. Matsuya’s art is loose and evocative, successfully bridging the super-powered antics with a very mundane sort of look for Collin, Master Molecule’s alter-ego. I especially liked the moment where Molecule Master is addressing his new charges, only to realize they team’s naming snafu, a moment which makes him change his posture from “villain” to “regular guy” again, seemingly visibly deflating.

All in all, Villains Seeking Hero #1 does a lot of things right, setting a comedic tone that still has enough dramatic underpinnings that the last page carries weight, with animated and colorful art that keeps every page graphically interesting. but most of all, it’s plot surprised me, making for a well-deserved 4 out of 5 stars overall. I’m very interested in seeing where all this goes, and I’m going to add this comic (and this creator) to my “Watch For” list.

I thought I had this book figured out, but then they swerved me, but it's a nice balance of slice-of-life and crazy-superhuman-battles, and I want to read more of this.