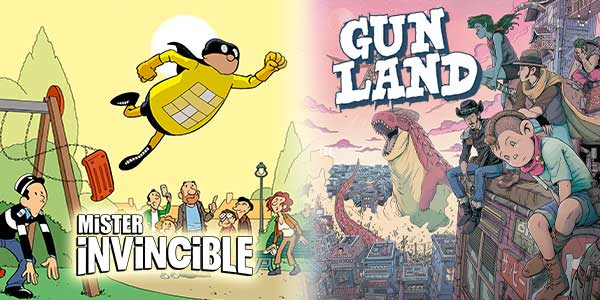 At the start of the year, the former Lion Forge imprint The Magnetic Collection returned to its status as a full-service publisher under the David Steward II founded Polarity holding company, which also operates Lion Forge Comics and Oni Press. Today, the publisher reopens its Magnetic Press webstore, offering introductory discounts on backlist titles, new releases, exclusive merchandise, and the ability to preorder upcoming releases directly.

“We were excited to get back to form with the 2020 relaunch, resuming some of Magnetic’s previous initiatives such as our direct webstore and our community engagement.” Says Mike Kennedy, Magnetic’s founder and publisher. “Despite the dour turn so early in the year with today’s quarantine climate, we’re actually taking this as a prime opportunity to pivot nimbly into supporting the market more directly, something we had in the plans from the start, but much more immediately valuable for everyone today.”

Independently established in 2014 by Kennedy, former publisher of Archaia Entertainment, Magnetic Press was acquired by Lion Forge in October of 2016 and rebranded as The Magnetic Collection. Magnetic received numerous accolades in their first five years of operation, including 17 Eisner Award nominations over their first four consecutive years of eligibility.

In light of numerous challenges facing the comic industry these days, Magnetic is constantly augmenting plans to release new material throughout the year with signature-quality printed books supported by a slate of digital and online content designed to build and engage a vocal community of readers, retailers and creators.  With Lisa Wu coming aboard to lead sales efforts across markets under Kennedy and overseen by Polarity’s Rick Johnson, comics retailers and independent bookstores are encouraged to contact Wu directly for marketing support and special opportunities.

“One of our main priorities is to create the best purchasing experience for those in the frontline of comics, the hard-working business owners who support us and our readers everyday” says Lisa Wu. “With this direct interface, Magnetic Press can share valuable insights about the buying trends and preferences of their individual stores, provide relevant, free promotional materials, and funnel our followers to their stores though our community outreach programs. Retailers are an important part of our ‘Magnetic’ family.” The Magnetic Press webstore launches today with introductory discounts ranging from 25-51% off retail prices for most items, a robust reward-point system, and several upcoming titles available for direct pre-order to receive directly upon their imminent release, including GenPet by Damian and Alex Fuentes, Streamliner by Fane, and Gunland by Captain Artiglio. Other new 2020 titles include the dystopic fantasy Nils: The Tree of Life by Jerome Hamon and Antoine Carrion, the continuation of sci-fi series Infinity 8 by Lewis Trondheim, and the return of the popular series KLAW by Ozanam and Jurion.More titles will be announced in the coming months, with Magnetic offering something for all ages across genres and formats.