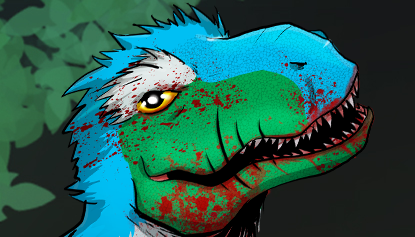 In light of Diamond shutting down comic book distribution and publishers closing down active production Independent Comic Creators are some of the only creatives currently making content. Webcomics and Digital Content can survive completely autonomously of the rest of the Comic Book Publishing Industry. With that in mind, I wanted to highlight some incredible Webcomic Creators who you can patronize right now (and continue to patronize forever and ever!), for incredi First up in the series is Sherard Jackson (Empty Zone, Galaxys for Hire, Assembly), is the entire creative force behind Darbi – one of the most popular comic strips on Webtoons – a bright, beautiful, brutal dino adventure. Jackson kindly cleared some of his time to talk with Major Spoilers about Darbi, his creative process, and why Digital vs Traditional Comics?

MAJOR SPOILERS: You’re one of the kings of Webtoons. What do you love about webcomics?

What I love about webcomics is any story genre can be told and anyone can publish. Also, the format opens up unique storytelling opportunities. MS: How long does an average Episode take you to produce? You’re the entire creative team! Take us through your process!

A few readers have asked why I can’t update twice a week. That’s why.

But seriously, I’ve loved them ever since I was four. I was fascinated by them, drew them, studied anything I could about these animals that used to rule this planet.

Growing up, I always preferred stories with dinosaurs, monsters, and robots as the heroes because it’s easier for me to identify with those characters.

A Lot of people feel the same way, too. One might say “I’m a T-Rex because I’m strong and fierce,” or “I see myself as a triceratops because I’m proud and I have strong family ties.” We relate to whatever species we feel fits our personalities. MS: What about the vertical reading format do you like?

SJ: It’s such a brilliant storytelling format that’s directly tied to our technology. With our phones and tablets, we’re given an endless canvas where we can play with the space, control timing and pacing differently.

When I first started working vertically, I’d initially laid everything out the way I normally would in any comic. The more I played with it, the more this format reminded me of frame-by-frame animation. When I’m working on Darbi, I’m approaching the storytelling the same way I would an animated series.

MS: What about the vertical reading format makes storytelling difficult?

SJ: It takes some getting used to because you can’t strictly rely on traditional print comics storytelling to get your point across. Panoramic shots aren’t as effective without either turning them sideways or splitting them up into vertical slices.

When I want to explain it to someone who’s never read a comic in this format, I would say imagine you’re scrolling through your Instagram or your Spotify playlist. MS: What came first the name “Darbi” or the Dinosaur?

SJ: The dinosaur. I knew I wanted to tell a story wit T-rexes as the heroes. The name came second, but I knew “Darbi” would be one of the leads..

MS: How much research goes into each of your designs?

SJ: Quite a bit. I watch every documentary I can find on dinosaurs. I’ve also studied their anatomy, and read several books and articles on them.

Granted, it’s a fantasy story and not a docu-drama, but it helps with the suspension of disbelief.

**Note: you can hear Jackson talk about the research he does for Darbi by listening to last year’s live Geek History Lesson from Los Angeles Comic Con where he joined them on the panel How to Write SciFi Based on Real Science!

MS: Which character is the most challenging/most fun to draw?

SJ: A few of them, actually. The two most challenging were Ballah Myke (ankylosaurus) because he has lots of spikes. And Rhed (triceratops), just because he has so many colors.

MS: What are the differences in your experience creating for Webtoons vs Traditional Publishing?

SJ: With traditional publishing you have a few steeper hurdles.  If you’re self publishing then you’re dealing with a team, print costs and distribution. If you’re looking for a publisher, you may or may not get picked up.

Webtoon makes it incredibly easy to get published. They have a Canvas section where anyone can upload their work and promote it.

MS: Are Episodes still coming out through the pandemic?

For me and, I’m assuming for a lot of readers, having the series continue coming out weekly helps in maintaining a sense of normalcy.

MS: Where will Darbi go in the future? Print copies? (pimp that Kickstarter!)

SJ: I’m glad you asked! Darbi has a Kickstarter for the first volume, launching Apr 21!

It’ll be 150+ pages, collecting the first three story arcs from season 1. We’ll have tons of awesome stuff to go along with all the tiers: original prints, commission sketches, plushies…

Also, I’ve been looking into getting a video game made. It would be fun to do something like a classic 2d side-scrolling brawler!  And, animated series…fingers crossed!

MS: Any advice for Creators who are just starting out?

SJ: Do it. Don’t think about doing it one day, or wait for the right moment. Just start. Tell your story the way you need to tell it. If the story doesn’t immediately work the way you planned, then change it. It’s yours. It’s online for anyone to see. Noone can take that from you.

Do it. Start now!