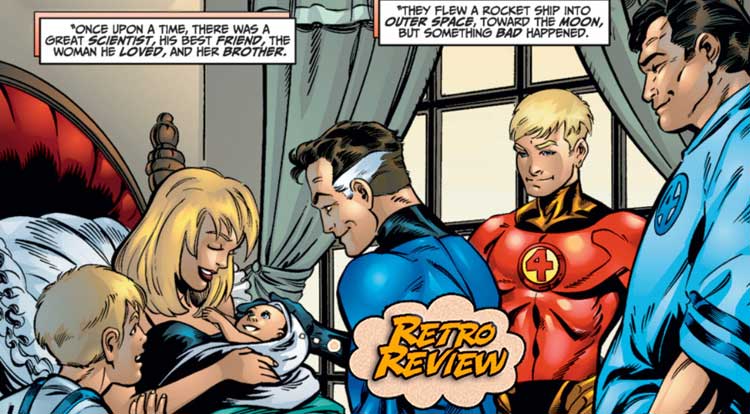 Reed  and Susan Richards lost their second child back in 1984…  didn’t they?  Your Major Spoilers (Retro) Review of Fantastic Four #54 awaits! Previously in Fantasic Four:  During an extended trip through the Negative Zone, Reed and Sue accidentally conceived a child because they’re adults who get to have a sex life, even on a cosmic camping trip.  Sadly, the combination of the cosmic radiation that empowered them and the strange energies of the N-Zone endangered the pregnancy and even the help of radiation expert Otto “Doctor Octopus” Octavius wasn’t enough to save the child, who was seemingly stillborn.  Her brother, Franklin, whose phenomenal cosmic reality warping powers are legend, transported her to an alternate reality something something #TimeTravelShenanigans, but when his powers were depleted saving the universe, Sue was suddenly pregnant, with the same child, again. Trapped in some sort of pocket dimension by a threat known as The HIdden Ones, Reed is unaware of what has happened to the rest of his Fantastic Foursome.  Ben Grimm, trapped in human form, has been locked away in prison, with some sort of psionic compulsion preventing him from transforming into his rocky state (which he could do at will around this time.  And as for Sue, The Invisible  Woman, she is in active labor while the government-sponsored Guardsmen lay siege to the Baxter Building. But what about the hot-headed Human Torch?  He’s preparing to make a deal with the closest thing he knows to a devil… With Reed’s genius out of play, Johnny turns to the next-smartest man he can find (Peter Parker, Bruce Banner, Tony Stark and Mister Wizard apparently weren’t taking his calls), begging for help saving his sister and unborn niece.  Remarkably, Doom agrees, traveling back to New York with the Torch on his errand of mercy even as The Thing and Mister Fantastic figure out how to break free. I’ve always loved Mark Bagley’s take on Doctor Doom, as his angular art-style really makes the hard edges of Victor’s faceplate even more pointy and terrifying, but there’s also a sense of… gentleness to his approach to Sue in these pages that I never expected anyone to be able to deliver.  After all, he’s a scarred maniac in medieval armor and a burlap cape, how human can he be?  Reed and Ben break out and desperately race home to their family, arriving just in time for Doom to announce the birth of his daughter.  “I believe congratulations are in order,” Doom smirks, “and thanks.” Not only did Doom solve Sue’s radiation problems, he managed to fix Johnny’s power issues (The Torch had been unable to turn off his fire for several issues at this point) and did it all effortlessly, even choosing the newborn Richards child’s name: Valeria.  These days, she’s a precocious preteen genius going by the codename Brainstorm, but Val Richards not only bears the name of the long-gone lost love of her parents’ worst enemy, she may have a record for the longest gestation by a human baby at nearly TWENTY years, and Fantastic Four #54 pulls off this impossible trick with aplomb, with Bagley’s clear and lovely art balanced against the multiple moving parts of Pacheo, Marin & Kesel’s story, making for a better-than-average 4 out of 5 stars overall.  As a wise man once said (probably), some first appearances are more unusual than others.

Marvel canon holds that this "first appearance" is the same child conceived years earlier in Fantastic Four #254, making for a complicated (but satisfying) issue of comics.