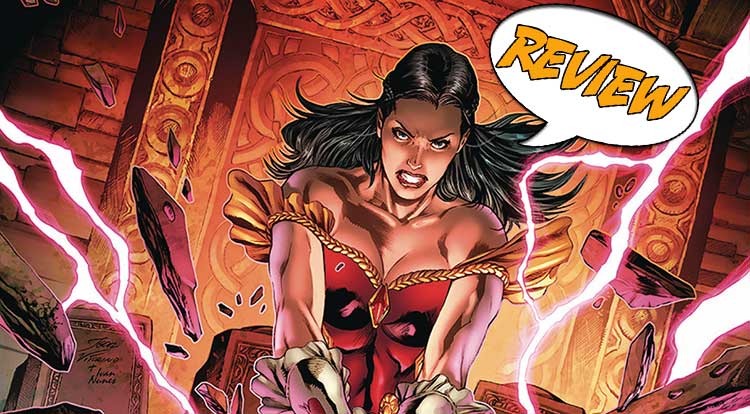 In GRIMM FAIRY TALES #37 from Zenescope,  Merlin rules Camelot!  And now he has Skye Mathers, the Guardian of the Nexus in his grasp.  With the other members of the Round Table, he will be able to launch his conquest of the Realms.  Can Skye escape his clutches and lead the fight back? Find out in your latest Major Spoilers review! Previously in Grimm Fairy Tales: Skye Mathers fights to survive as the Realms of Power fall into chaos!  Under the guidance of her mentor, Shang, Skye took over the role of Guardian from her mother.  But the Grimm Universe is unbalanced, as dark forces seek to overthrow the status quo.  With her mentor taken, not only must Skye find him, but also uphold her role as Guardian of the Nexus!

BY THE POWER OF…GRIMM SKULL!

Boy oh boy, GRIMM FAIRY TALES #37 is a big old slice of ham.  Pouting heroes, leggy women, ranting bad guys, expository dialog dialled up to 10 and good old fashioned smash and crash action.  If you bought GRIMM FAIRY TALES #37 in the hope of an intellectual discourse of dialectical materialism, you’ve gone down the wrong path in life.  If you, however, are looking for a fun, colorful frolic that won’t tax your brain cells, then this is the issue for you!

It all feels very Saturday morning cartoon times.  Big brash bad guys, in the shape of the skull faced Merlin.  Brave, sexily drawn heroine, in the shapely shape of Skye Mathers.  A coterie of grotesque bad-guys, and a lot (and I mean a lot) of talk between Merlin and Skye, and you have a cartoon in the shape of a comic.

When our favorite heroine is kidnapped by a giant frog and transported to Camelot and disgorged onto the floor in a flood of stomach juices, you know the writer and artists are having a good time.  When they then spend the rest of the issue flitting between Merlin telling Skye his entire plan and with Skye telling him why she is going to stop him, you know they grew up on Saturday morning cartoons, especially stuff like He-Man (Skeletor is clearly an inspiration for Merlin).

All of this is good clean fun (though the female characters spend a lot of time sticking their hip out to ensure the reader can see exactly how high the slit is in their costumes).  Franchini manfully extends the story beyond what little plot there is to begin with, providing a lot of snark and spite from Skye, and plenty of declaiming from Merlin.  It isn’t the greatest dialog you’ll read, as a lot of it is explaining the plot to the reader, spiced with threats from Merlin and denials from Skye.  It’s the sort of thing you’d hear watching a show like Riverdale, which confuses verbiage for insight, when in it is nothing of the sort.  Still, it is a lot of fun listening to characters yelling at each other while the other characters in the castle just sit around and watch.

The artwork is far better than the writing. Some of the panels are quite small in instances, as in the scenes where Merlin is describing how Skye will serve him as his general. Elsewhere, the artwork is allowed the space it needs, providing some sumptuous visuals in Camelot’s throne room. There is an amount of same/same to the character design for Merlin’s champions, with only some slight variations and the coloring allowing them to be differentiated. Otherwise, in sync with some dynamic coloring from Jorge Cortes, the artwork overall lifts GRIMM FAIRY TALES #37 above its pedestrian storytelling

Franchini conveys the sense of a large backstory throughout GRIMM FAIRY TALES #37, while foregrounding the action reasonably well. There’s some nice fight scenes, but way to much expository dialog which tends to bog down the pace of the story. That said, there’s just enough mystery unveiled in this issue to keep those devotees of the series to come back for at least the next issue.

GRIMM FAIRY TALES #37 harks back to those fabled Saturday morning cartoons on television. It's good, escapist fun. While the story telling doesn't exactly zip along, there's a good sense of good and evil, with the main character striving to do the right thing all the way through. Allowing the supporting characters more involvement in the narrative would've made for a stronger reading experience, but there's always more opportunity for that in upcoming issues.