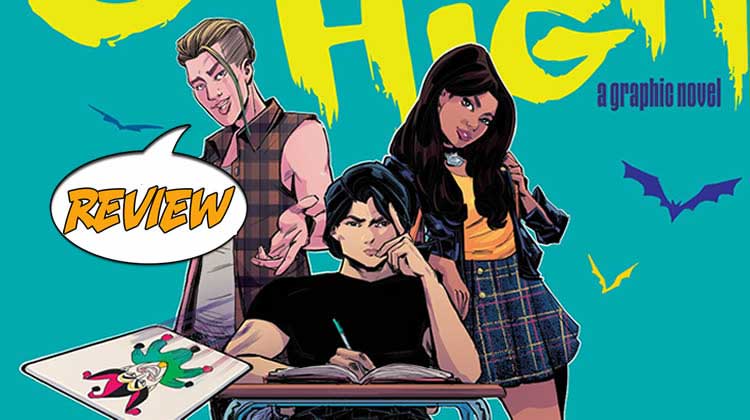 Gotham High is the latest in a series of DC young adult graphic novels, and it explores how teens exist in today’s high schools, and how much they’ve changed since they were children. SOLICITATION: From the #1 New York Times bestselling author of Alex and Eliza and The Witches of East End comes a reimagining of Gotham for a new generation of readers. Before they became Batman, Catwoman, and The Joker, Bruce, Selina, and Jack were high schoolers who would do whatever it took-even destroy the ones they love-to satisfy their own motives.

After being kicked out of his boarding school, 17-year-old Bruce Wayne returns to Gotham City to find that nothing is as he left it. What once was his family home is now an empty husk, lonely but haunted by the memory of his parents’ murder. Selina Kyle, once the innocent girl next door, now rules over Gotham High School with a dangerous flair, aided by the class clown, Jack Napier.

When a kidnapping rattles the school, Bruce seeks answers as the dark and troubled knight-but is he actually the pawn? Nothing is ever as it seems, especially at Gotham High, where the parties and romances are of the highest stakes…and where everyone is a suspect.

With enchanting art by Thomas Pitilli, this new graphic novel is just as intoxicating as it is chilling, in which dearest friends turn into greatest enemies-all within the hallways of Gotham High!

AN ‘ELSEWORLDS’ FOR TEEN BAT-FANS

I’ve become a big fan of these “young adult” graphic novels that DC has been putting out on a pretty regular basis. They often take us where we haven’t been before in the lives of DC characters. Gotham High was one of the very few books released digitally by DC this Wednesday.

This one, however, seems to transport us to an alternate reality where some important parts of the Bat-mythos have changed. For instance, Alfred Pennyworth is Bruce Wayne’s gay uncle, not a butler. Also, Bruce’s mother was originally named Ma-Sha Dean before she became Martha Wayne, and she was “the most beautiful girl in Hong Kong,” so the story goes. Instead of going to see the Zorro movie at the theater, this Wayne family went to see Madame Butterfly in a live performance. They returned home to find thieves ransacking their home, causing Bruce to hide under his bed while both parents were killed. Not only that, but Selina Kyle lived next door to Bruce, and Jack Napier was the “class clown,” appropriately enough. We also do find that Gotham High is a lot more “diverse” than other Bat-universes might have been.

Bruce does have a penchant for aiding the defenseless even here, as we see in the first pages of this book. Sadly, when the video of him confronting bullies after a classmate goes viral, the administration says they have no choice but to expel him, forcing him to public school, hence the name “Gotham High.”

There really isn’t a lot of difference between the private school Bruce was attending and Gotham High, as we discover. Bullies are bullies regardless of what school you find yourself in, and Jack is part of a gang even though he fancies himself a photographer. He does love his playing cards, of course.

Selina rules the students with an iron fist, but she has money troubles because her father’s estate is tied up until she reaches legal age. And he’s not in the best of health, so she could really use the money.

One of the best parts of this book is the witty dialogue. For instance, Bruce likes to say “not” something, prompting Selina to say, “I like a guy who speaks in double negatives.”

Kidnapping seems to be the biggest crime the teens encounter, though, and Harvey Dent gets grabbed while wearing Bruce’s jacket. Bruce feels guilty about it, so he throws a big party in an attempt to catch the bad guy. Instead, one of the “big three” ends up captured, and a ransom must be paid. Just who is doing what to whom gets revealed by the end of the book, and not all of them end up where they started.

As I always like to say, two things determine how much I like the art. First is how well the facial expressions are done. The artist does an excellent job of helping us know who is who, and what the various characters are feeling.

I also thought the action sequences were strong, especially the fights. I actually winced a time or two as they broke out, drawing me even more into the story. Great job!

Although it didn’t start out this way, there have been several of this YA books focusing on Batman/Bruce Wayne. As a big Bat-fan, I’ve enjoyed them all, actually. Even though this for me was an alternate universe, it was still fun to see how the various teens, their families, and their friends all moved forward in the story.

When we find out exactly what’s going on, it makes sense to me, especially given where we know the teens are likely to end up as adults.

The only fault I found in this book was that Bruce was getting knocked out by “poisoned” darts too many times. Granted, he’s not Batman yet, but once would have been enough for me. Maybe this whole experience teaches Bruce to cover his neck and legs up more, hence the Bat-costume!

As far as character development, we really don’t see the main trio blossom into their costumed identities at all in this volume. I mean, long-time fans like me know where they’re going, but it would have been enjoyable to see at least one of them put on something indicating their future identities. Maybe that’s for future volumes?