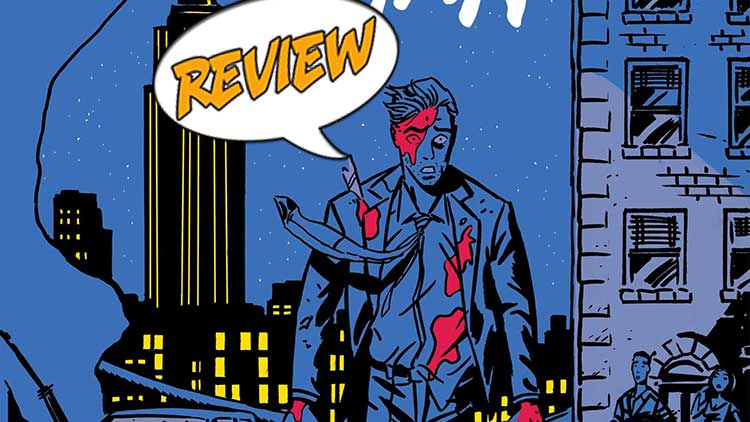 Hank Kelly is a broken man.  Until he finds out that he can’t be broken.  Your Major Spoilers review of Cut Man #1 from Action Lab Entertainment, awaits! Previously in Cut Man: Hank Kelly cannot die. With this revelation, his life is thrown into a world of fame and fortune. But can fame and fortune repair his broken family? Meanwhile, detective Rosalind Lovejoy makes a fateful discovery: Kelly’s immortality has a dark cost.

Look Both Ways Before Crossing The Street

Cut Man #1 opens with the main character Hank Kelly considering killing himself before eventually deciding not to.  Things then shift to a therapist appointment where it’s revealed that Hank has depression issues stemming from him not having visitation rights for his daughter and anxiety over an upcoming hearing to earn those rights.  Hank then goes to a bar where he meets Lilith Crosse.  The two hit it off and eventually wind up at Hank’s apartment where they sleep together.  The next day Hank is on his way to the hearing when he’s hit by a truck. He then wakes up in the hospital where he learns that he has miraculously healed in 5 hours from life ending injuries.  Also, the word of his healing has gotten out and a crowd has gathered around the hospital to celebrate him.  The issue then wraps up with a scene that may be the secret to Hank’s newfound powers.

A Strong Introduction To An Interesting Premise

Cut Man #1 is a comic book that is lifted up by it’s final pages.  The rest of the comic is fine as an examination of a depressed, failed father. The writing is good and doesn’t feel hokey or overwrought even though there’s plenty of opportunity for it to become that. But there isn’t much there that makes it standout.  What really separates Cut Man from other books with similar subject matter is the final quarter of the book.  The sudden revelation of a superpower, followed by a rapid shift in Hank’s life outlook, then the possible explanation for the powers at the end, is a series of events that works well.

I won’t say that Cut Man #1 wouldn’t be as good with different art, but thankfully we don’t have to consider that possibility. Robert Ahmed brings a minimalistic, yet stark approach to the interiors here.  Every line feels necessary and utilized to serve a purpose rather than decorate. Also, the monochromatic color scheme works great here. Especially when there’s a brief shift from blue to yellow, it gives those panels weight and makes the reader really pay attention to them and consider their importance.

Cut Man #1 introduces a lot of pieces that I’m looking forward to seeing start coming together and moving around each other.  The success of this series will be based on which aspects of the story it focuses on the most. But if the first issue is any indication, the creators have a solid grasp on how to balance these elements and make a compelling story.  4 out of 5 stars

Cut Man #1 is a good introduction to a series that has a well constructed hook that is also elevated by exceptionally executed interiors and colorwork.