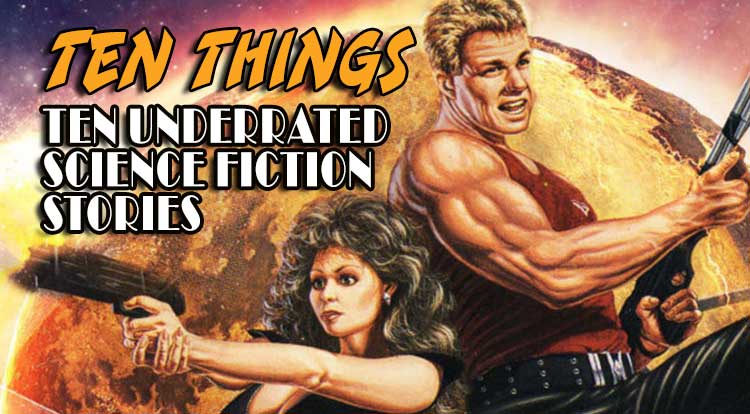 Everybody loves Star Wars… but what about those OTHER science fiction offerings? Welcome to Ten Things: Ten Underrated Science Fiction Stories!

A truly touching animated experience, you might be thinking that this one is already well-regarded. While that is true, I don’t feel like it gets the attention that it deserves, from Vin Diesel’s incredibly nuanced performance (presaging his ability to make “I am Groot” mean anything he wants it to) to the remarkably retro art style to the devastating-then-uplifting ending. For my money, this should be the most-heralded animated film of the modern era, teaching a subtle lesson of self-improvement and self-sacrifice, ending with the truly wonderful aesop that you can be who whomever you CHOOSE to be. Sure, it killed a studio and the career of legendary animator Don Bluth, and maybe the the plot doesn’t hold together as coherently as it would have (five writers and an extended period of development can do that to a film), but I maintain that his flick is much better than it’s reputation. It features some great performances (Bill Pullman’s Korso may be all over the map, but his acting sells every moment of it), some cool animation (watch the icefield sequence with a critical eye and try not to be impressed) and just enough Joss Whedon dialogue to pull it through the bits of plot that don’t make sense. If you’ve never seen ‘Titan A.E.’, you owe it to yourself to check it out. So, full disclosure: There’s enough body horror in this movie to sink the Titanic and/or send you into a paralyzing stupor, lying in the shower hugging yourself and crying for eleven hours. OR SO I’VE HEEEEARD… With that warning aside, though, this movie is perhaps David Cronenberg’s finest cinematic achievement, making you think about matter of perception, truth, reality and sadomasochism, and if you can get past the shocking effects, you’ll find a fascinating journey into the depths of the human mind. It may not have aged as well as it could have (modern TV is not what it was in 1983) and man, is it ever gross, but it’s well worth the watch.

Sometimes, a cigar is just a cigar… but not if you see it in Zardoz. A legendarily surreal mind-screw of a movie, it’s development reputedly came from the director wanting to adapt ‘The Lord of the Rings’ and you can see that epic scale in the finished product. Many modern internet schmucks have dismissed it solely on the costuming (star Sean Connery spends a good portion of the film in knee boots, a speedo and suspenders) and the outlandishness of the imagery, but Zed’s journey through a post-apocalyptic Earth is a fascinating story full of ruminations on the nature of humanity, human sexuality and violence.

Plus, it’s one time you can say for certain that the creators WERE on drugs, as the director has openly admitted as much. Probably best-known to Generation X folk as the inspiration for the Mike + The Mechanics song from 1985, this movie is one of my favorite late-night TV experiences as a young man. Set in a future where Earth has been devastated and the only planet and animal life that still exists preserved in domed orbital stations, it has a strong environmental message and an AMAZING performance by Bruce Dern. If you enjoy the high-minded science fiction of ‘2001: A Space Odyssey’ or ‘Children of Men’, this movie should be on your to-see list.

It’s big, it’s dumb, is as subtle as a brick in the face, but damned if I don’t LOVE this ridiculous Tim Burton opus. Based on the legendary trading card of the sixties, this movie manages to keep the gut-wrenching horror while adding an absurdity to the sight of alien monsters slaughtering, maiming and experimenting on most of the human population. Burton brings his usual epic design sense to the film, making it as visually memorable as ‘Beetlejuice’ or ‘Edward Scissorhands’, while an amazing cast (including a young Jack Black and a not-young Jim Brown) chew every scrap of scenery to within an inch of your life. As the Martian Ambasaador so succinctly put it: “ACK! ACKACK! ACKCKACKACKACK!”

Hey, wanna have your heart broken? You can either watch ‘Brazil’ or read about the horrific meddling Terry Gilliam’s story had to endure in order to get made. A remarkably prescient look at life in a mechanized dystopian nightmare, where a single typographical error can literally destroy a man’s entire world, this movie is also the rare example where the ludicriously over-the-top elements have gotten less and less ridiculous with each passing year. it’s a story so bleak that Sam’s eventual tragic ending is almost a relief (for him AND for the viewer) and it has made it impossible to ever see Michael Palin in the same way. Okay, here’s the deal: I don’t actually love this entire movie. The first two thirds of it are unpleasant in various ways both visual and story-related, but the last few minutes of the movie redeem all that with perhaps the warmest, sweetest, most human science fiction moments of the past 25 years. After endless abuse, robo-boy David awakens in the far future and is gifted a single day with his long-dead human mother. It’s a beautiful sequence, one that is truly underrated, and makes the experience of seeing the storytelling techniques of Spielberg and Kubrick arm-wrestle to a draw for more than two hours.

Remember the dystopian, dehumanized future of ‘Brazil’? Now, add in the additional wrinkles of ‘The Internet’ and modern, decentralized living, stir in a cup of doomed romance, and sit back for the melancholy. This movie is another that is quite well-received, but still isn’t recognized for how successful it really is. Scarlet Johanssen’s performance is ENTIRELY vocal, but still makes you understand how someone could immediately fall in love with her, while Joaquin Phoenix is a living human embodiment of the concept of loneliness. If you haven’t seen it, you should.

Just be prepared to be sad…

That is all correct. And yet, it’s still underrated, and not enough people sit down and goggle at it’s beauty once or twice a year, as I have done since 2015 or so. No movie is perfect, but AKIRA is about as close a viewing experience as I’ve ever had. Normally, I’d say that mileage may vary, but not this time. Go watch it, right now. You won’t regret it.

Thanks to Faithful Spoilerite and friend of Major Spoilers Thomas Perkins (@TNPerkins4) for this week’s topic.  Feel free to follow along @MightyKingCobra for more Ten Things madness on Twitter or check out the full Twitter archive here!  As with any set of like items, these aren’t meant to be hard and fast or absolutely complete, if only because I didn’t even mention ‘The Black Hole’.  Either way, the comments section is below for just such an emergency, but, as always: Please, no wagering!