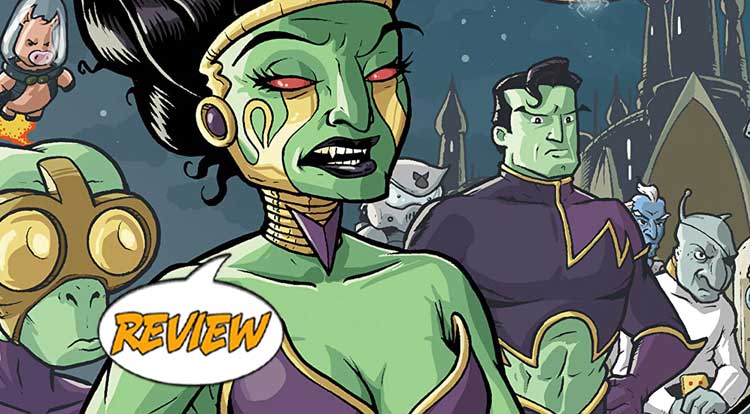 Once, they were the greatest superheroes in the world.  Now, they just want a nap.  Your Major Spoilers review of The SuperFogeys #7 from Th3rd World Studios awaits! Previously in The SuperFogeys:  After the big events in Las Vegas, there’s no time to rest when all the alien enemies of the Fogeys’ past invade the Earth at once!

“WHAT HAPPENED TO STAR MAIDEN?”

As we open, legendary retired hero Captain Spectacular is an absolute wreck, having failed to stop a giant robot attack on Las Vegas last issue, followed by the insult of seeing his former lady-love Spy Gal get married… to his own sidekick!  Cap’s misery is short-lived, however, as an alien invasion masses above the planet, led by former hero Star Maiden!  Things get super-complicated, as Spy Gal realizes that Dr. Klein, the adminstrator of the home for the super-retired is actually the wicked villain called The Third Man, but doesn’t realize that that name is literal: He’s also her new husband, Jerry!  As the villains attack, elderly speedster Swifty modilizes to save his sweetie, but isn’t up to the task himself, instead cajoling the young Society of Heroes into combating the invaders from space…

…whiiiich leads to them all being killed.  Who can save the day?  The Greatest Caped Generation, my friends!

This issue is very clearly two chapters of a long ongoing saga, but I was happily surprised how easy it was to adapt to these characters and their world.  Part of that is the smart use of archetypes (the Superman guy, the Emma Peel woman, the fast guy) but a lot of the success of this story comes in the dialogue.  It’s hard to balance realistic speech patterns against the rigors of serialize storytelling, but this issue pulls it off admirably.  I also enjoy the art, falling somewhere between Michael Avon Oeming on ‘Powers’ and Aaron Willaims’ ‘PS238.’  I’m most impressed with how well Marc Lapierre balances traditional cartoon squash-and-stretch principles with dramatic, grounded storytelling without breaking the rules of either technique.  There’s a definite webcomic feel to SuperFogeys (for obvious reasons), but this issue collects two individual chapters and still feels like one coherent, satisfying chunk of comic storytelling.

The final page reveal of the elderly heroes preparing (with different levels of enthusiasm) to bring the fight to the aliens feels like a “Hell YEAH!” moment done just right, and even though I’ve never read about any of these characters before, I’m psyched to see them triumph.  The SuperFogeys #7 may be my first introduction to these characters, but I don’t think it’s going to be my last, as the combination of action, intrigue and humor makes for a very entertaining read, with excellent art making for a well-deserved 4 out of 5 stars overall.  As of now, I’m officially a fan of Spy Gal.

It's hard to do parody well and even harder to do parody and have it feel like it has consequences... This book pulls it off.