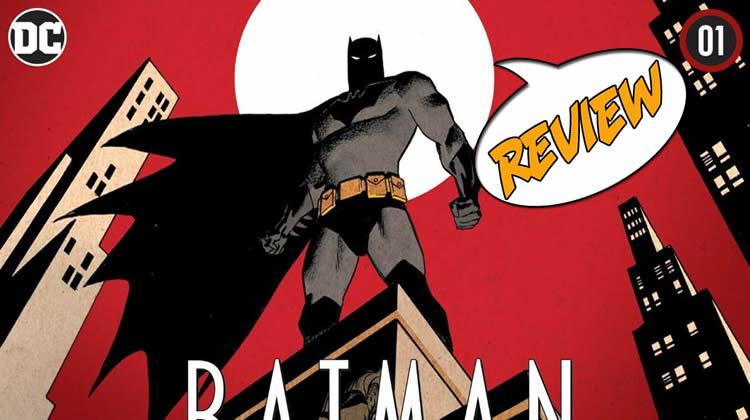 Batman: The Adventures Continue #1 from DC Comics kicks off this book, a return to the universe created by Bruce Timm, Paul Dini, Alan Burnett, and many others! Their adaptation of the Dark Knight is considered a classic, so will this series be worthy of the legend? SOLICITATION: From the visionary producers of Batman: The Animated Series comes all-new stories in this seminal animated world. In this opening chapter, S.T.A.R. Labs in Gotham City is attacked by a giant robot that steals an entire room from the laboratory. Who’s controlling the robot? How will Batman stop the mechanized menace? And what does it all have to do with Lex Luthor’s sudden appearance in Gotham?

BACK TO THE BATMAN

This book has the distinction of being one of the very few released on the first Wednesday that new printed comics did NOT arrive in local comics shops. It was intended to be a “digital first” series, so it arrived via comiXology. Thank goodness! This book almost made up for the loss of the printed titles I was looking forward to this week!

If you haven’t watched Batman: The Animated Series and the following shows in that universe, I extremely highly recommend you dive into them, starting with the one that started it all!

The first thing you’ll notice is that this book is wider than it is tall, which is unusual for most comics. It’s something like Mouse Guard in layout, a format I always liked. Second, you might see this book has an introductory panel in the style of the original show, something I’ve missed terribly!

This book obviously takes place after the crossover event “World’s Finest,” in which Batman met Superman for the first time. Based on the darker costume the Dark Knight is wearing, these may be taking place prior to Justice League, when he wore a much bluer outfit. That doesn’t diminish my interest, though, in the least!

It’s tremendously smart of DC to gather as many of the original creators as possible, including Paul Dini, Alan Burnett, and Ty Templeton, the artist who did a great job of bringing the cartoon to the printed page. His art is very true to the style of Timm, and works well here.

Since this is the first issue in the series, there’s a lot of set-up going on, including the appearance of Lex Luthor in Gotham, the return of Veronica Vreeland (potential squeeze for Bruce Wayne), and the sighting of a mysterious figure in the shadows watching Batman. There’s talk of Bruce taking on Tim Drake as his ward, so it’s not difficult to guess just which sidekick the shadowy figure is, and this is his first appearance in the B:TAS universe. Alfred is up to his usual matchmaking, hence Veronica’s appearance.

Lex and Bruce discuss his recent “incident with the Joker” (See “World’s Finest”), and we get to see Batman’s encounter with yet another powerful robot, something I always enjoyed in the show because they challenged the Dark Knight on several levels.

We don’t discover everything that’s going on, of course, because there’s more story to unfold in two weeks. Can’t wait!

As I previously mentioned, Templeton did a great job of capturing the influence of Bruce Timm’s art on Batman and Gotham. He’s back in true form, with the simple yet dynamic style that made the show and the comics influenced by it so enjoyable. When it comes to B:TAS, less is always more!

While the facial expressions are always very simple, they still do a tremendous job of letting us know what the characters are feeling, and that includes Lex (he of the big lips). Of course, the action sequences just pop off the page as they did in previous comics based on the series, a real pleasure to read.

BOTTOM LINE: Filling in Some of the Story Gaps Well!

Because I absolutely adored B:TAS and the following shows, I was anxiously awaiting this book. It did not disappoint! It was like diving into a familiar and inspiring story, and it felt like no time at all had passed since the last comic by Templeton and company had appeared.

Based on interviews I’ve watched with Mr. Dini and others, I know that this book is a prelude to a new series of action figures as well as an attempt to revisit the animated universe so some characters that never made it to the small screen can get their B:TAS treatment. I just hope that the sales are strong enough so that what now seems to be a limited series can blossom into an ongoing comic. You hear that, DC? I have money I want to give you!

The only people who many not grasp all that’s going on are those who somehow have NOT watched the cartoon or read the comics. If you are in that group, it’s not too late to catch up. And, boy, should you! I’m almost jealous of those of you experiencing this universe for the first time! You have such wonderful stories waiting for you! I’ll just have to enjoy this book and revisit the series yet again! Highly recommended to all!

This book has the distinction of being one of the very few released on the first Wednesday that new printed comics did NOT arrive in local comics shops. It was intended to be a “digital first” series, so it arrived via comiXology. Thank goodness!