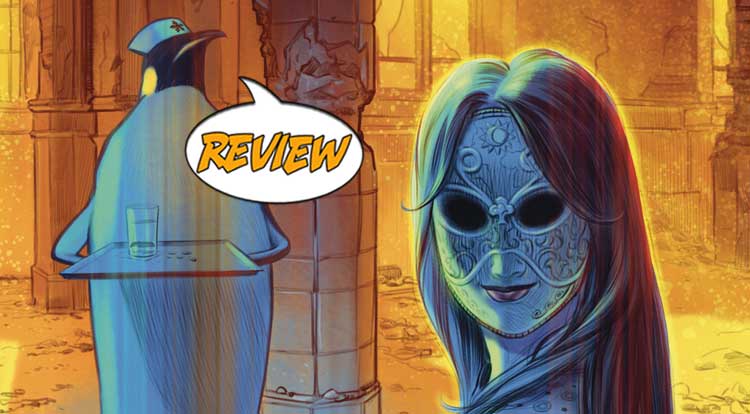 Stranger Things: Into The Fire #3 (of 4) Review

Marcy is close to finding her pyrokinetic twin…  but will she be too late to stop the flames?  Your Major Spoilers review of Stranger Things: Into The Fire #3 from Dark Horse Comics awaits! Previously in Stranger Things: Into The Fire:  A former Hawkins Lab subject is closer than she’s ever been to finding her estranged pyrokinetic twin sister after tracking down a scientist involved in Dr. Brenner’s experiments and forcefully prying her location from him.  Can she reach her powerful sister before her twin loses control of her powers and burns down her surroundings… again?

As we open, our teen protagonist, Marcy, is holding a man at gunpoint, demanding the location of her sister. The man she’s pointing at, Dr. Morris, agrees to tell her all she wants to know, explaining that Jamie was one of the subjects of experimentation at his former employer, children with strange psionic powers. When subject Eleven proved to be more powerful than all the others, Morris was tasked with “taking care” of the girl. Instead, he snuck her out in the dead of night to a nearby psychiatric facility, where an equally unscrupulous colleague kept Jamie under sedation. Morris believes that he saved her life, but Marcy is less enthused to find that he handed her twin off and left her alone. For her part, Jamie is living in a strange hallucinatory world where she sees herself as a masked princess and her room as the castle where she is being kept, with troubling images of Marcy as someone who lied to her. When she smashes an imaginary mirror, she badly injures her hand, and when an orderly comes to bandage her wounds, she makes her escape. When Marcy and Ricky arrive to try and save her, they find the facility going up in flames…

Full Disclosure: I can’t read the title of this book without hearing that song from ‘Wet Hot American Summer.’ Oh, and also, I’ve never seen an entire episode of ‘Stranger Things’, so I’m going in, essentially, blind. It doesn’t end up being a problem for me, though, as this story touches tangentially on themes of the television show, but is otherwise distinct from it. Jamie’s status as Subject Nine is really the only thing that might be confusing, but Morris explains enough that it all feels organically part of the same story. The overall plotting of the issue is a bit stop/start for me, intertwining Jamie’s nightmares with Marcy’s attempts to find her, but the final few pages pull it all together quite well. Kelly’s art is quite good when showing us vehicles and landscapes, and his storytelling is good, but I’m less enamored with the character’s facial expressions. Jamie and Marcy don’t really look all that much alike in these pages, either, which isn’t a deal-breaker (lots of twins don’t), but is a bit distracting here and there.

Often times, when you leap into a licensed title, it’s easy to be overwhelmed by references to the source material. Stranger Things: Into The Fire #3 avoids those pitfalls, delivering on a tense standalone story that catches a reader’s attention, with art that flows but has some issues with facial expressions and detail, rounding out to a better-than-average 3.5 out of 5 stars overall. As someone unfamiliar with the source material, I was happy to find that this narrative still worked for me, something that can’t always be said about spin-off media.

A gripping story with some solid storytelling that gets a little undermined by muddy facial expressions. I still want to know how it all ends, though.