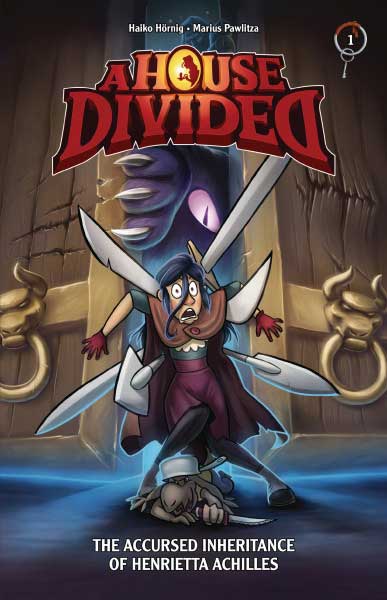 A HOUSE DIVIDED: THE ACCURSED INHERITANCE OF HENRIETTA ACHILLES is a magical and dynamic romp that takes its cues from the role-playing games the creators played as kids. When 15-year old Henrietta Achilles is plucked from the orphanage and taken to a mysterious town called Malrenard, she’s surprised to learn that the death of an uncle she’s never met means she’s inherited his home. But Henrietta quickly learns that this inheritance is more of a burden than a gift. The house holds a powerful, magical secret—and now it’s plagued by bandits and strange creatures intent on possessing the house and its treasures. Henrietta is quickly swept up in their antics as she is thrown headlong into an ominous but kooky adventure full of stolen quiche, talking statues, and roving pirate gangs.

A House Divided: The Accursed Inheritance of Henrietta Achilles is the first of a four-part graphic novel series that arrives in book stores on April 7, 2020.